A Cambridge local has been selected to represent New Zealand on the cricket pitch in an opportunity described as “better than winning the lottery”.

“Because you can win Lotto but you still can’t play for New Zealand,” said Rudie Swanepoel, a South African-born Cambridge local of almost 20 years who will proudly wear the NZ shirt in an Over 50s cricket match against Australia in Nelson later this month.

“It’s like a dream come true,” explained Rudie. “I always sort of ‘joked’ to the guys, my long-term goal would be to represent New Zealand in the Over 60s… and then this came up and I couldn’t believe it.”

Similar to the NZ Over 60s team, the Over 50s is a new initiative which will see a squad of 14 players take on an Australian team in a three-day tournament over February 19 – 22 – which will help determine the team that will compete in an Over 50s world cup later this year.

“The Aussies are really in for it,” laughed Swanepoel, who has been playing cricket since the age of three or four years old. “I’ve never really stopped,” said the Cambridge Antiques cricketer, who has also been a cricket coach (and a teacher) at St Peter’s School for many years.

“I’ve just got a passion for cricket, some kids refer to me as Mr Cricket because I like it so much,” he laughed. “It’s all new, it’s an opportunity and it’s up to me to make the most of it. If you can get your foot in the door it’s up to you to take it from there.” 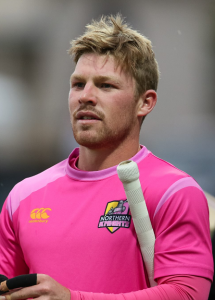 Meanwhile, 2013 St Peter’s School graduate Tim Seifert made his international cricket debut playing with the Black Caps in the T20 Tri-Series on Tuesday night, helping to end the team’s three-match losing streak with a 12-run win over England in Wellington.

Seifert arrived on the international stage in a tense situation, facing the first ball of the final over of the New Zealand innings. If he was nervous he certainly didn’t show it, hitting two sixes in the six balls he faced to push the New Zealand total to 196. Seifert then added a run out to cap off a top night.

Seifert’s father Marty, who caught up with his son after the game, said Tim really enjoyed the experience. “It was a bit surreal,” he said. “It was a big stadium with lots of people yelling and screaming, but he certainly seemed to cope pretty well with it.”

“Playing four years ago for the school team (as captain of the 1st XV for three years), and now to be on a different stage with the big boys, it’s quite a turnaround… he’s done pretty well.”