Gordon Grantham was in charge of Cambridge police for 27 years, and retired last April.

More than 450 people turned out at Mystery Creek last Thursday to pay their respects to former Officer in Charge and Sergeant of Cambridge police, Gordon Grantham, who died on December 28.  Husband to Diana for nearly 50 years, dad to his three daughters, Rebecca, Amanda and Emma, and “Poppa Plod” to his grandkids Jorja and Braxton, Gordon was devoted to his family, and loved fishing, travel and animals.  He was an expert with the iron, master of the BBQ and by all accounts kept his garden in such pristine condition that any weeds would be too scared to grow there.  The turnout at his funeral was also testament to the lasting impact Gordon had on the Cambridge community since he and his family moved here in 1990.  As eulogist Kay Gregory noted, Gordon was a person who spent his whole life trying to make the world a better place.  He always carried two hankies, she told the assembled mourners, one for himself and another one just in case someone needed a cry.  “That’s the kind of person he was,” she said.

His daughters remember him as a devoted dad, attending dance classes and sporting events.  If they were participating in something, he was right there supporting.  He even taped bathroom taps on his feet to join in their tap dancing – there was a photo to prove it.  And he took tremendous joy and pride in his recent role of “Poppa Plod”, throwing himself into that as he had done with his own children. Daughter Emma credited him with teaching them values, morals and compassion. 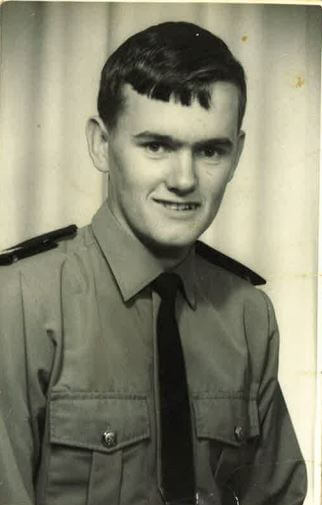 Gordon Grantham was just 17 when he went to Trentham to train as a police officer, and it was at a dance in Wellington back in 1969 that he met Diana, who would be by his side as his wife for 48 years.

Gordon’s brother, Inspector Ross Grantham, spoke about his older brother’s impressive list of career highlights, remembering him as having a “stuff the politics, just do the right thing” approach. Among a list of achievements too numerous to include in full, from 1978 – 1981 Gordon was responsible for staff on two long-term undercover operations, credited with securing 135 arrests (all convicted) and effectively taking out the top tier of drug dealers in Wellington.  Operations Fonz and Lollipop are still recognised as being the most successful undercover operations of their kind.  He had some hairy moments working undercover during the 1981 Springbok tour, getting intelligence about the protests, “legging it” down the road when violence between police and protestors erupted at one of the demonstrations he was at, Ross said.  Gordon was the chair of the Wellington Police Association for 7 years, and played a key role in the aftermath of the Mikhail Lermontov sinking in the Marlborough Sounds in 1986.  In charge of 63 police staff and 22 Russian embassy officials processing the survivors at the Wellington wharf, Gordon made sure that all 742 passengers and crew were interviewed and transferred to accommodation in Wellington in just five hours.  No mean feat, given the 4am start.

Gordon was also responsible for undertaking a security review and making recommendations for improvements (all implemented) of Government House and the Prime Minister’s residence, which included having to work out a way for Governor General Sir Paul Reeves’ dog to get through the internal doors.  Gordon was so thorough in the security overhaul, Ross said, that he was interviewed by the SIS because they thought he had “overstepped the mark”. But that was just Gordon, if you were going to do something, you did it properly.

Then his career brought him to Cambridge, where he took up the role as Officer in Charge until his retirement this year.  Ross recalled how Gordon phoned him not long after moving here to ask for his professional opinion about a crime he was investigating.  A local horse breeder had complained to police that the grass on their berm had been scythed and taken away. Quite a far cry from his fast-paced police work in Wellington, Ross noted with a chuckle. A guard of honour formed as Gordon Grantham was driven away from his funeral.

As well as his police career, which saw him awarded a Queen’s Service Medal for services to crime prevention and community policing in 1993, Gordon worked tirelessly to improve the Cambridge community.  Dave Simes, who served in the police with Gordon for many years, spoke about his legacy of service to the community.  Dave said that Gordon, “Granni” Grantham, derived enormous satisfaction from seeing others succeed and was a natural goal-setter before that was even a thing.  At the start of each year, he said, Gordon would look for a need in the community and then set about doing something to address it.  From being one of the founders of Cambridge Lifeskills, setting up Cambridge Victim Support with wife Diana, receiving a Blue Star Sapphire for his services to Rotary, and making sure vulnerable elderly people had firewood for the winter, and much more, Gordon did most of his community work in his own time.  “Granni” would leverage his position (as Officer in Charge) to get momentum and support and then step back once a project was established, Dave said.

He played the part of Santa in the Cambridge Christmas Parade, and Gordon was continually looking for opportunities to build trust and confidence in police before that was a concept on the police radar.

In 2015, Gordon was also awarded the Rimmington Award by the Fieldays Society for his 20 years of contribution for the event which he continued to support even after he retired, running the communications hub as a volunteer last year.

But despite his dazzling list of achievements, both professional and voluntary, it would be his empathy and kindness that Gordon Grantham would most be remembered for, Dave told the mourners.  He was, indeed, one out of the box and will be sorely missed by his family, friends and the Cambridge community.  We were lucky to have him.