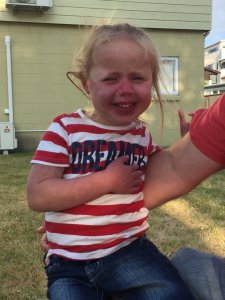 Four-year-old Cambridge girl Estelle Transom was born with Sturge-Weber Syndrome, a rare neurological condition that affects about one in 50,000 people.

Cambridge parents Rosalie Christini and Ian Transom are in an agonising race against time to raise $200,000 for their daughter’s medical treatments before her face becomes permanently disfigured.

Estelle, 4, was born with Sturge-Weber Syndrome, a rare neurological condition that affects about one in 50,000 people.

She has an accumulation of abnormal blood vessels near the surface of her skin, leaving about half her face and body marked with port wine stains.

There are also abnormal blood vessels in her brain, causing her to suffer from seizures, optic nerve damage in one eye, and mental and physical delays.

“She had her first seizure at five and a half months and since then her life’s revolved around eye operations, MRIs and hospital appointments,” Rosalie said.

“She’s on medication now but her last seizure about 17 months ago was so severe it took them four days to get it under control and they believe she probably had a stroke. She lost all the movement on one side of her body, but she’s got that back now.”

To treat the port wine stains, Estelle needs 50 laser treatments costing $4000 each, with the first 20 needed as soon as possible.

“If she doesn’t have laser treatment her face will end up deformed,” Rosalie said.

“There’s a high chance her nose will balloon up and get really out of shape and the port wine stain will get lumpy and develop little blisters on it that are really easy to knock and bleed.

“At her age the stain on her face doesn’t cause any pain or discomfort, but it will when she’s older, and it’s that whole psychological thing. When she goes to school – if she can go to a normal school – she will be different.”

As a parent Rosalie has always given back, volunteering on various committees and generously giving her time to help others.

For years she has juggled Estelle’s medical appointments with part-time work in Hamilton and commitments to Leamington School’s PTA, where she organises school lunch orders and helps with a range of fundraisers.

“I was on the PTA before I even had Estelle, so I’ve just carried on,” she said.

Now she and Ian are in the stressful position of having to ask others for financial help to raise the thousands of dollars they need.

Waikato District Health Board could only promise to fund four treatments, she said, whereas funding in some other in countries, such as Australia, was unlimited.

“Everything we have we’ve worked for, so to have to rely on others’ generosity and money coming out of other people’s budgets is quite a humbling experience,” she said. “I don’t think anyone likes to ask for money.”

The couple is “hugely” grateful to people who collectively donated $5000 through the Givealittle website following an article about Estelle in a national magazine earlier this year, and to the Lions Club of Cambridge, which gave them $4000.

“Bunnies (Childcare and Pre-School), where Estelle goes, and Leamington School, where two of our older boys go, have also been incredibly supportive and run fundraisers for her,” Rosalie said.

Rosalie fights back tears as she speaks about one Leamington School family who anonymously donated $500.

“I think it just shows there are some really, really kind people in the world who are willing to help,” she said.

“There are so many good causes and we always feel really lucky when people choose our daughter.”

If you would like to help Estelle, please visit www.givealittle.co.nz and type “laser treatments for Estelle” into the search window.