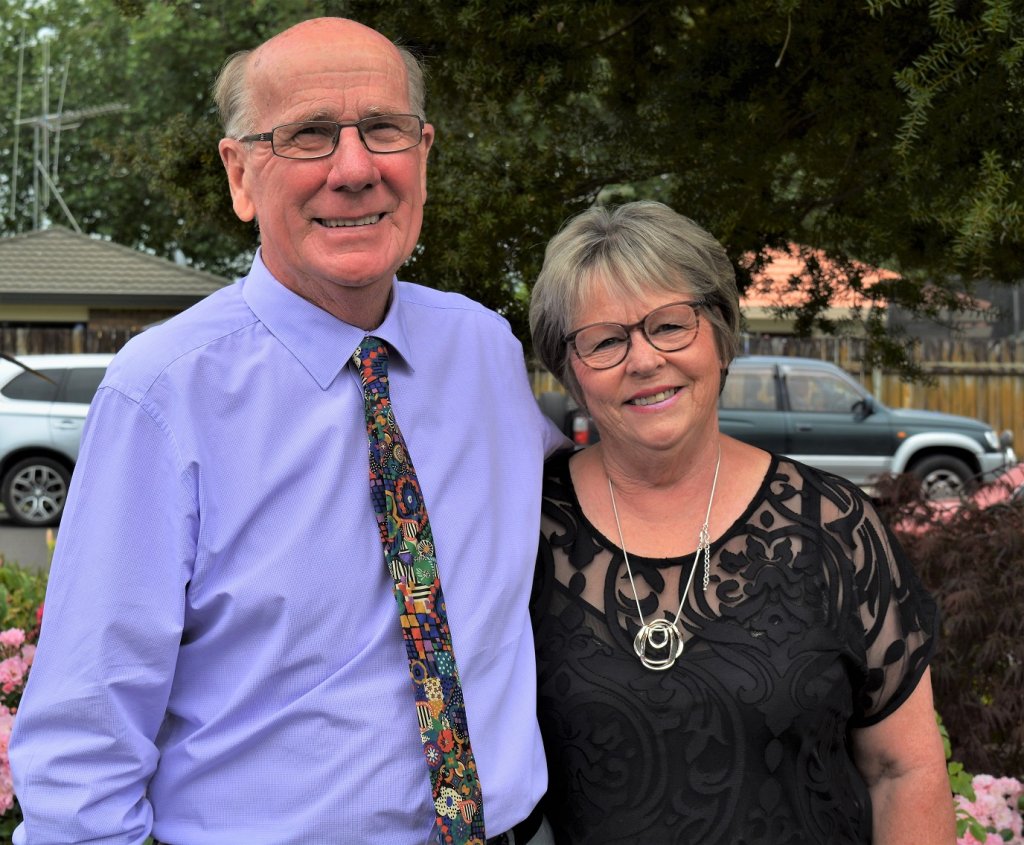 Jenny and Gordon ‘Rusty’ Baker have retired and are leaving Cambridge.

Cambridge’s loss is about to become Hawera’s gain as Jenny and Gordon ‘Rusty’ Baker head back to the coastal settlement where their 55-year relationship began.

The Bakers have both been the somewhat reluctant stars at several farewells over the past week or so.

Jenny, who leaves the Cambridge Health and Community Centre after 23 years, was toasted at both a Trust luncheon on December 1 and then at the centre’s annual Christmas party a few days later.  Husband Gordon – or ‘Rusty’ as he is best known – was a special attendee at the December 8 Cambridge Middle School’s farewell to principal Ross Tyson.  As Ross bowed out of his role after 17 years, so Gordon said goodbye after 14 years as the school’s caretaker.

With all that merry-making over the space of a week, both Jenny and Rusty signed off on almost 58 years of combined work effort in Cambridge – years in which they unwittingly cemented themselves into the hearts of the town’s residents.

“We had both been thinking we needed to retire … we just needed a bit of a nudge,” Jenny smiled.  “Now is the right time for us; I’m very excited about what the future holds.”

That ‘nudge’ came in the form of an unsolicited offer on the house they built five years ago in Tulip Drive. It was a very respectable offer, and the Bakers viewed it as the opportunity they had been waiting for to launch this next chapter in their lives.

So, it’s back to Taranaki they go. Back to Hawera where they grew up, met on a blind date some 55 years ago, and wed almost 50 years ago.  It is where some of their family remain and some are buried, where they made memories as kids and teens and where their four children were born, and where the odd school chum still lingers. Jenny Baker is leaving her desk at the Cambridge Health and Community Centre after 23 years.

One of Jenny’s marching friends from her youth recognised her in the street during a recent visit. It was a happy, hope-filled reminder of just how deep those Hawera roots lie.

The Bakers have long been the personification of the saying “good things take time”, a characterisation that also started in Hawera. The town is where Gordon began his 35-year career in the dairy industry, and where Jenny took her first post-school job at the local VW dealership before moving on to the Farmer’s Co-op.

Gordon’s working life became all about cheese.  When the Bakers came to Cambridge in 1983, it was so Gordon could take up a job as assistant dairy manager at Hautapu under the then Waikato Dairy Company. Later, as manager for 15 years, Gordon steered the operation and courted international cheese markets with infinite patience and tenacity, and he was largely instrumental in bringing to New Zealand the delicious dry salted mozzarella variety.

Jenny also displayed an innate ability to turn a slow burn into real success.  When the family had grown, she decided to do a social and community work certificate at Wintec, and eyed out the one-time maternity home for the required three-month practicum component of the course.

“The timing wasn’t great – soon after I started the Trust experienced difficulties due to the lack of tenants, and were laying off staff.  I asked them if I could stay on for free, said I’d answer the phones and keep the place open, and they agreed.

“Kiri Gray, who was on the Trust and was also involved with Cambridge Community House, oversaw what I was doing. She’d come every Friday and we started cleaning out all the rooms. Then at the end of my three months I wrote to the Trust thanking them for having me, telling them how much I had enjoyed it, and asking them to take me on as co-ordinator.  I had never done anything that bold before – and now here I am, 23 years later!” Jenny worked tirelessly to bring tenants on board and perfected the art of making countless funding applications. Today, the centre is home to various community groups and its offices and meeting rooms are in constant use.

“A lot of people think this is a cruisy job, but it’s because I’ve been here so long that it just looks that way.”

At last week’s Christmas lunch, Cambridge Health and Community Trust chairperson Rosemary Hill described Jenny and her constant flow of ideas as the ‘magic’ that has helped make the centre what it is today.

“It was by absolute chance that she came here – I call it serendipity,” she said, just before awarding Jenny three ‘gold medals’ for her efforts.

One was for her volunteer service under difficult circumstances, the second was for her 23 years of “outstanding, exceptional and dedicated service” to the Trust, and the third was for displaying a “sterling quality throughout the establishment of the Magnolia Lounge”, a building brought on site and adapted to provide a day care facility for Resthaven’s dementia patients and a day club for the public.

Jenny replied by describing her tenure with the centre as “utterly amazing”.

“This has been the best job I have ever had. Right from the start, I knew this place could work, and we have had an enormous amount of fun making it happen. I don’t think there has been a single day in 23 years that I haven’t wanted to come to work.

“I have loved the people, loved being my own boss, loved organising and seeing things happen,” she added. “And the Trust – well, they are fabulous. I have been very lucky with them.” Gordon lent a hand at the centre whenever he could, and for years they beavered away together for the good of the community.  “This place has been a huge part of our life – Gordon only stopped mowing the lawns here about a year ago,” said Jenny.

The shift to a different sort of life has been long coming. They will move back to Hawera, tackle a new house and section, set themselves up as house-sitters both in New Zealand and internationally, and move to a new rhythm – one that will give them time with their children and grandchildren.

Gordon was in senior management role in the largest cheese manufacturing plant in the southern hemisphere until he was 55. He was once told that being in a high-pressured career can shorten your life by a decade. It was something that weighed heavily on his mind, and was behind his decision to retire early enough to be able to take on different roles at both Cambridge East and Cambridge Middle Schools.

“Young people today put themselves under tremendous stress by wanting the best of everything. To get it, both parents work all hours and there is much less interaction with the children.  It isn’t good for anyone in the end.

“Moving from working 40 hours a week to doing nothing is going to be challenging for me. I’ve given myself two to five years to adjust to it.”

Not so for Jenny.

“I’ve enjoyed every moment of my working life, but I’m really looking forward to doing absolutely nothing for a while,” she grinned.