Thousands turn out for Armistice in Cambridge Almost four thousand people turned out to the Armistice in Cambridge event over the weekend, the largest commemorative event in New Zealand, marking the anniversary of the signing of the Armistice to end the First World War in 1918.

The history and pageantry of New Zealand’s military past was recognised and celebrated with the displaying of militaria both old and new – from tanks, trucks, weapons and uniforms, through to aircraft, helicopters, boats, models and more. A popular feature for most was the battle re-enactments, depicting many of the wars New Zealand has been involved in from the 1800s land wars through to the Vietnam War – but organisers weren’t quite expecting to see someone come forward who had been present at such an event. 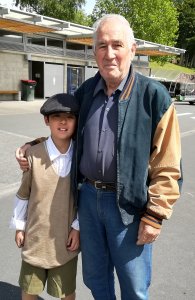 Avan Thomas (left) played a young boy in one of the re-enactments depicting German occupied Holland, which was viewed by Dutch-born Jack Spanbroek (right) who was there as a child in 1944.

Operation ‘Market Garden’, the ambitious large-scale operation launched by the Western Allies into German-occupied Holland in 1944, was re-enacted on Saturday with twelve-year-old Avan Thomas playing the part of a young boy being stopped by Germans to have his papers checked.

Shortly after the show, Dutch-born 80-year-old Jack Spanbroek was found to be at the event. As it turned out, he had in fact been there in German-occupied Holland as a seven-year-old boy, and was even chased by the Germans himself.

“Jack’s presence at the event was not known until after the re-enactment, so this was a pleasant surprise to organisers when he came to the info desk to ask directions,” said one of the event organisers, Paul Watkins.

As well as all the action happening out at the lake, the official memorial ceremony took place at the Cambridge Cenotaph on Remembrance Sunday – the closest Sunday to the 11th of November.