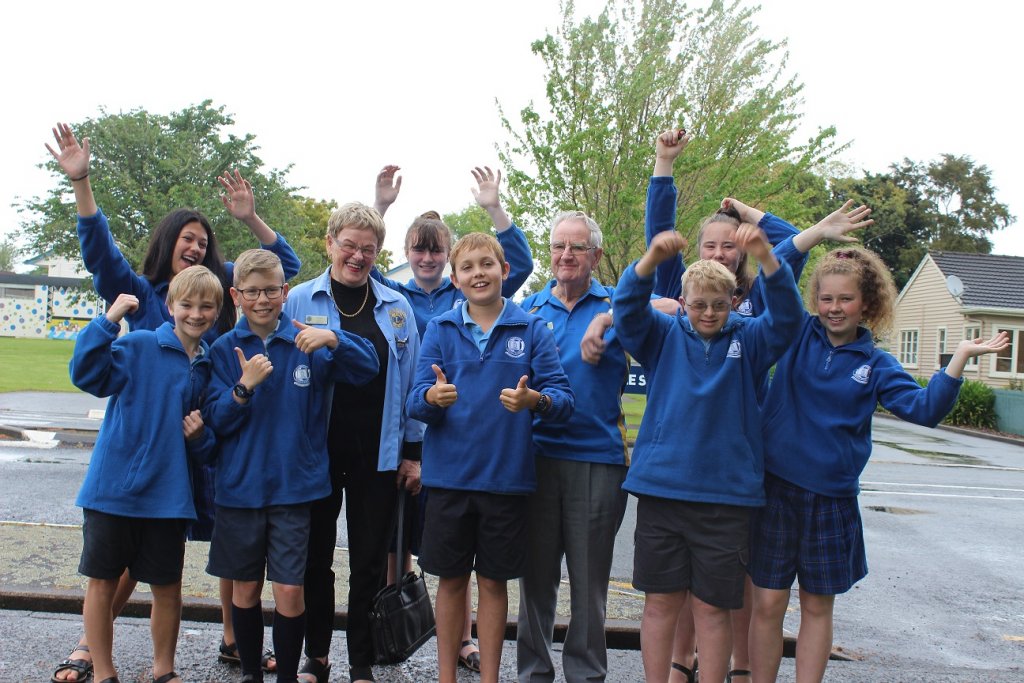 Students at Cambridge Middle School were met with a surprise at their school assembly last week when a member of the Cambridge Lions presented them with a cheque for five thousand dollars.

Faye Gohns, on behalf of the Cambridge Lions funding committee, explained that they had received a letter from one of the students, Luke Philip, writing on behalf of the school to seek funds for the school’s proposed new playground.

After reading out the letter, she announced that they would be donating $5K towards the cause and presented Luke with the cheque, prompting an excited round of applause from the young crowd. “The Middle School has over 400 kids and we only have one small very old playground,” Luke’s letter read. “I used to play on the playground all the time at Primary School with my friends and I really miss having somewhere to go and climb at morning tea and lunch time with my friends. Over winter the fields can get really muddy so it would be awesome to have a new playground that was built for our age.”

Outside of the assembly, Faye said it was the personal element of the hand-written letter that made all the difference for them. “What appealed to us was the approach that he made, for a child to use their own initiative and write a letter,” she said. “The Cambridge Lions, there’s 85 of us, work hard at the Lions Shed and with the food caravan and any money we get we like to put back into the Cambridge community.”

Cambridge Middle School’s deputy principals Julie Dawick and Bridget Watkins were very proud of Luke’s initiative. “I think it’s just so powerful for a kid to do that… in the future they can say yes, I helped fundraise for that,” said Dawick.

“And it shows the power of student voice too,” added Watkins, “and gives our students the belief that they can actually make a difference.”

The school’s Colour Run event held in September also raised funds toward the new playground, which is estimated to cost around $100,000.