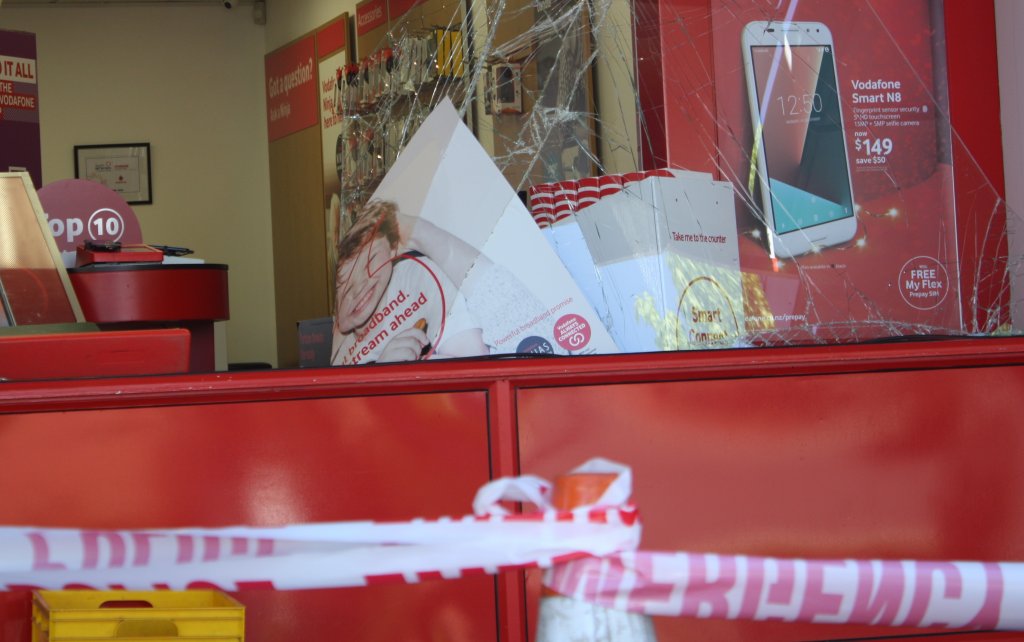 The Vodafone shop sustained greater damage in the attack, with their whole front window taken out.

In the early hours of Tuesday morning last week, both the Spark and Vodafone shops on Victoria Street were targeted by thieves who smashed through their frontages to gain access.

The Spark store was hit first, with video footage showing two intruders smashing their way inside with a rock around 4am, with one waiting outside as a lookout, store manager Amylee McDonnell said.  Once inside, they bashed a large hole in a bolted door and went into the back office. Security at the Spark store has been increased after their alarm failed to activate during the raid.

Amylee said once the thieves had gained access to the back room they were unable to open a barred and padlocked cupboard that houses the new phones.

The shop’s alarm failed to go off, and Amylee said an immediate investigation by the security company has been launched, and security has been beefed up to prevent a repeat of the situation.

The first staff knew of the situation, she said, was when a passing courier alerted one of her staff to the smashed window.

After being unsuccessful at the Spark store, it appears the thieves went over the road and smashed through Vodafone’s front window.

This time, Vodafone’s alarm sounded, and security arrived at the scene to secure the premises, and when Vodafone staff arrived security personnel went over the road to guard the exposed Spark store.

Early media reports said Spark had suffered more stock loss than Vodafone, which Amylee said was incorrect. “We didn’t lose anything, and Vodafone only lost one phone,” she said.  Vodafone sustained more damage however, as their front window was smashed.  Spark only had to replace a glass door and connecting door into the back office.

Police said that a car stolen from Vogel Street was linked to the raids, and that their enquiries are ongoing.  They ask that anyone with information contacts the Cambridge Police station or call Crimestoppers on 0800 555 111 to make an anonymous report.