A Cambridge cat is taking the world of social media by storm, with his classic cat persona and grumpy Grinch face to boot.

Pedro the Loiterer, a 6-year-old Maine Coon living on Williams Street, has made a name for himself as a sociable cat with an all-about-me attitude, topped off with a hilariously unimpressed look about him.

It was in fact his “resting prick face” that sparked the social media sensation, all starting with a post on the Cambridge Grapevine Facebook page. Pedro had made his way onto a neighbour’s shed roof, and gained the attention of a concerned resident who thought he might be in pain based on the look on his face. Posting his photo to the local Facebook page, it was eventually found to be Pedro. 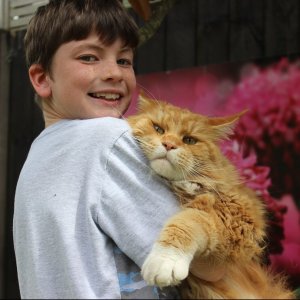 Liam McGregor with Pedro the Loiterer.

“I heard about the post and at first I was like, oh no I hope my cat is all right, but then it turned out it’s just because he always looks like something died and crawled up his arse,” his owner Nikki Mayor laughed, adding that he was especially displeased that day because he’d had a few knots cut out of his fur. “I think he knew he looked a bit silly.”

Pedro’s started gaining more attention as he made various appearances around the neighbourhood. “I started getting private messages from people,” explained Nikki, who had initially thought that he was only visiting the house over the fence. “And then another guy said that he comes and visits their house, and then another lady said that she’d got home and found he was cuddled up with her dog in their cat basket! So, he’s obviously been crop dusting himself around town.”

The increasing appearances prompted encouragement to start a Pedro Facebook page, and so Nikki did.  Within a week the ginger celebrity had over 140 followers.

“He seems to have been pretty pleased with himself lately, and I’m sure he’s getting more attention from the neighbours,” Nikki said. “He’s actually a lovely cat, he wouldn’t hurt a fly, he just consistently looks like he wants to murder something.”

Pedro has only caught a couple of birds in the five years Nikki has had him, with his lack of speed hindering his success. Instead, he resorts to charm. “When he wants food, he sashays his tail like a feather… he knows how to work it to get what he wants.” At 9.5kg Pedro (right) loves food, as does his “sister” Muca (left), pictured with their human Liam McGregor.

As well as loitering, Pedro’s favourite past times are eating (with his paws), sleeping, and spending a little time with his friends. A neighbourhood black and white cat, and his “sister” or flatmate, Muca, are his favourite felines, whilst his favourite human is his owners’ friend, Collin.

Despite having broken the cat flap trying to squeeze his big belly through, and leaving countless scratch marks on the fence from hoisting himself over on an adventure, Pedro is a very-much-loved member of his household. “He has sort of connected our neighbourhood a bit,” said Nikki. “He’s just funny. He’s actually very tolerant with the children too, and very gentle.

“He just loves getting out and about, and sitting on the neighbour’s shed.”  He’s not stuck, just having a rest.