Cross leases in the crosshairs

Decision time is looming as Council considers a $100,000 report on how to manage water metering for around 1,000 cross-lease properties across the district.  Claire Castle did her best to understand the four options under consideration.

Freehold homes have a dedicated water meter and a private pipe running to a house, making the job of billing for water used straightforward. One house, one meter.  The difficulty for Council has come in working out how to best accommodate residences on a shared title – most commonly older cross-lease flats or units – in the new metering regime.

For older cross-lease properties – about seven per cent of all properties in Waipa – water comes through the council’s blue meter at the road and from there it splits off to different homes on the same section. The problem arises in determining the fairest way of billing each occupant for their share, given that in some cases there is a big difference in their water usage habits.

Council’s project delivery manager, Lorraine Kendrick, said there is no perfect solution to this issue and councillors are going to have to consider what is the best option for all ratepayers connected to the town supply, not just those directly impacted.

Kendrick also said people forget they are already paying for water. While some Waipa properties have had meters for years, those without meters pay for water through their rates.  For the 2017/18 year that charge is $405.20. 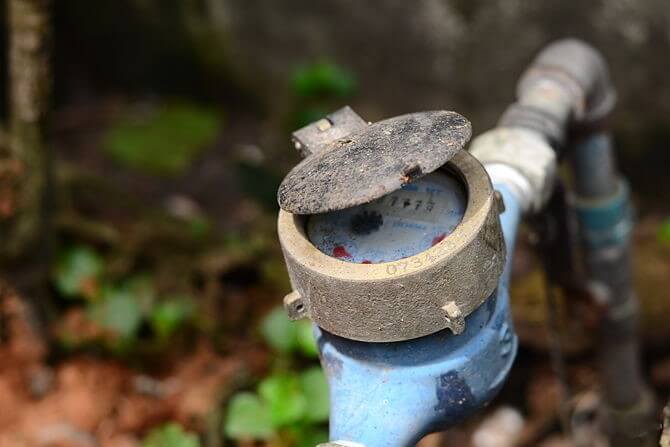 Four options under consideration. n how to manage water metering.

Option one is to keep the existing uniform annual charge (currently $405.20) for each complex property, regardless of what comes through the meter at the gate.  This option doesn’t require people to think about water conservation or fix leaking pipes on their own property that are driving up the town’s water usage – the very point of installing water meters.

Option two is the original idea put forward – installing a meter at the gate and then dividing the cost of the water used equally between the number of homes on the section.  This option has raised concern from some affected residents that their neighbours may be using much more water than they are, so they will be unfairly charged.  According to Council, because cross-lease properties tend to have smaller sections, many cross-lease property owners will pay less for water than the $405 per year for water that they’re paying now.  Two mock bills sent out prior to the real bills coming in mid-2018 will show if that’s the case.

The third option on the table is installing a ‘parent meter’ at the boundary and a separate ‘child meter’ on each dwelling.  While this would solve the problem of charging inequities by ensuring each household pays for the water it uses, it would also come with a price tag of $3,209,300 (about $3,400 per flat or unit) to be funded by all ratepayers connected to the town supply. Legally, it would only be possible if all neighbours who co-owned the property agreed to it, and requires ongoing meter-reading access to properties.  Within the group of around 1,000 affected properties there are 123 more complex properties to be considered, where pipes connect to the first dwelling and then travel through roof spaces or under houses to reach the other dwellings.  The exact cost of sorting this scenario is unknown, and will require internal plumbing work to get ‘child meters’ installed outside each property.  Also, there’s a risk that as the water goes through each meter, the pressure will reduce. Fine if you are in the front, not fine if you are in the back.

The fourth and final option is providing each dwelling with its own private pipeline to the council point of supply, meaning they would be metered in the same was as freehold sections – one house, one meter.  This is the most expensive option, coming in at an estimated $5,720,000 (nearly $6,000 per flat/unit) to be funded by all ratepayers connected to town supply. This raises the same issues with all owners needing to agree, and as well as external plumbing changes there will need to be potentially major internal plumbing work on those 123 complex properties.

It’s an unenviable choice before Council, and the report makes it clear there are pros and cons to each option.  Whatever they choose, someone is not going to like it.

Councillors are voting on which of these four options will be adopted at 9am on Tuesday November 28 at the Council chambers on Bank St in Te Awamutu. The public is welcome to attend.