Six months in a leaky building

Despite the massive construction effort underway, life goes on for yoga studio owner Sarah MacDonald and the other tenants at 60 Victoria Street.

The plastic-wrapped building dominates the main street, with most people under the impression that it’s earthquake strengthening work, Sarah said.  In fact, the early 1980s era building is a leaky building, and has been for years.  With multiple owners – 10 people own 13 units in the building – it’s been difficult to organise the repairs, which Sarah’s landlord Ivan Imiolek described as “massive”.

Another owner, Peter Bryant, who is on the maintenance committee of the body corporate, said the remedial works will cost around $1.5 million and will be divided up according to the size and value of the units.  Peter owns the top floor, now the site office, and will be up for a third of the cost, the owner of the first floor will be up for another third, with the rest split among the units on the ground floor – each footing the bill to the tune of around $100k each.

The complex 80s brick and cedar façade with aluminium joinery will make way for new double glazing and tiles, a new roof and guttering that can handle the maximum projected rainfall. 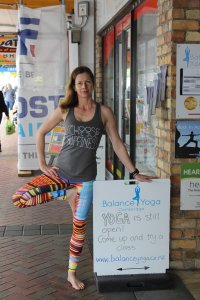 Yoga studio owner Sarah MacDonald said she is glad she decided to hang in there during construction works.

It’s going to be much better, and Sarah is glad she has decided to hang in there.  But it has all come as a bit of a shock.  Unaware of the problem until three weeks after she had moved in back in the start of 2015, Sarah was alarmed when the building was cleaned with high pressure hoses and the whole front section of her $10,000 new yoga floor was coved in dirty puddles. All the windows were closed.  “It was pretty obvious then”, she said.

Problems were ongoing, but she had no idea of the upheaval that was to come until a phone call in February this year telling her work could be starting in March.  “I thought it was just going to be replacing the windows,” Sarah said, shocked when she was told it was a 26-week project that would require her to surrender the premises.  The March start date came and went, as did April, May and June, with work finally getting underway on July 20.

Sarah is grateful that she didn’t have to vacate the building entirely in the end, because if that was the case, she said, her business would have closed down.

Instead, she has reduced class numbers and made other arrangements for during the day when the construction racket is in full-swing.

Although her yoga students have been “really supportive,” Sarah said the construction has had a big impact on her business.  “We’ve had to drop a number of our popular classes during the renovations and numbers are down in others,” she said, admitting that she initially thought about “walking away”.  However, she is pleased that she hung in there, and said that her staff and students alike are looking forward to the new-look studio that will be the end result.

Peter agrees that both tenants and surrounding businesses have been affected by the noise, scaffolding and the loss of parking caused by the remedial work.  Extra parks out the front for construction vehicles were negotiated with council, and the scaffolding around the building is cantilevered off the building itself rather than coming from the top of neighbouring buildings, he said.  The work had to be done, otherwise we would be left with an unusable eyesore in the middle of town, he added.

Once the remedial work has been completed, expected to be in February 2018, Peter said there is a re-design of the interior on the cards, making it more modern and attractive.

An artist’s impression of the $1.5 million upgrade