A former Cambridge resident now based in Perth has made his mark on the body building stage being named Mr Sports Model Australia and gaining his pro card in the process.

Jos Dekker, who moved across the ditch 6 years ago to work in the Western Australian mines, only entered his first physique bodybuilding competition a few weeks ago in September – a qualifier for the National Amateur Bodybuilders Association & World Fitness Federation (Nabba/WFF) Nationals.

“To have come away with such a dream result at my first competition was quite surreal, I was to say the least, shocked, but on cloud 9 at the same time. The hard work paid off,” said Jos.

At the qualifier he won each division he entered and went on to win the overall title for the men’s physique division, and qualified to compete at the national competition held on October 8.

At the nationals in Melbourne, the Cambridge muscle-man won first place, earning him the title of Mr Sports Model Australia as well as his pro card. This enabled him to step out of the amateur realm and into the professional division, and he now plans to compete for the title of Mr Universe in Singapore in June 2018. 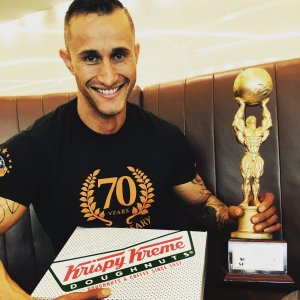 “To find out I had won the title of 2017 WFF Mr Australia Sports Model was out of this world, the fake smile you put on while you’re on stage turned into something I couldn’t wipe off my face, it was also quite emotional,” said Jos, “I had 20 weeks earlier decided to do my first ever competition and here I was taking out the top Australian title for WFF Male Sports Model.”

After making it through the first competition in September, Jos discussed it with his wife Kate and they decided to fly to Melbourne for the National Champs. “This meant four more weeks of dieting and grumpiness,” laughed Jos. “I’m surprised I’m still married!”

He competed in the Male Sports Model over 30s division at the national champs, and was a little nervous going up against such strong competition. “I had already achieved much more than I thought possible, I told myself and other competitors, that no matter what, we were all winners for getting ourselves in such top condition to be able to step up on that stage.”

Jos said heading into the international round in June, he didn’t plan on going into the competition lightly, but wanted to take time to rest and plan is the best option.

“This has been such an amazing experience and has done wonders for my self-confidence and motivation. Juggling work, study, gym and dieting is not easy. I owe so much to my wife and rock for all the support she has given me.”