The school gathered in the assembly hall for a surprise farewell for Mr Richard Glover last week.

A farewell assembly was held last week to bid goodbye to Cambridge Middle School’s longest standing teacher, Mr Richard Glover, who retired in August after more than 40 years with the school.

Mr Glover has left an impressive legacy during his career at Middle School, setting up a range of sports too long to list and influencing generations of Cambridge students. Jared Smith and teacher Mike Johnson were dressed up for the occasion, pictured with their room 9 class.

Students and staff alike wore curly wigs and moustaches to the assembly as a fun tribute to Mr Glover, whose moustache and dark curls have become a trademark over the years.

During the assembly he was given several gifts as part of a retirement kit and was awarded a raft of certificates which included ‘best moustache’ and ‘most amount of time wearing shorts in winter’. He was also presented with an official ‘graduation’ certificate for finishing his time with the school. 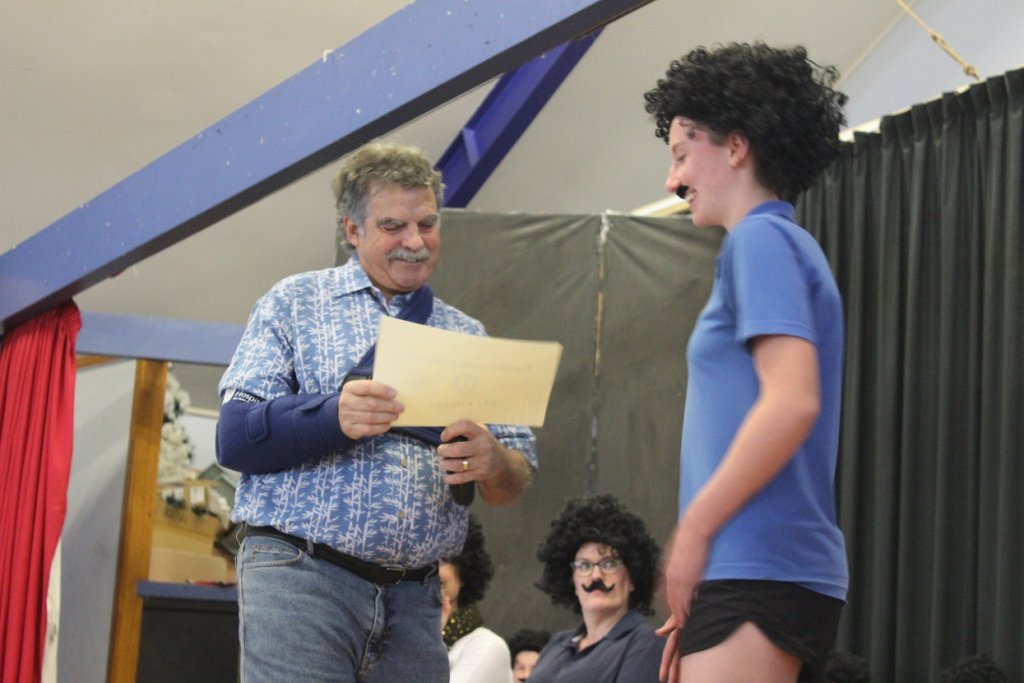 During the assembly Mr Glover was given special certificates such as ‘best moustache’.

Two students from his class spoke during the service, thanking him for his dedication to their class and the many that came before them. “Our class has really appreciated all of your stories you have shared with us. We will also never forget the Mr G way, and all of our learning.” During the interval break, one of Mr Glover’s students tried to explain the “Mr G way”.

“Mr G’s way is when he would simplify it, he would say, ‘do it Mr G’s way’,” said Jayda Munro-Smith. “He was brilliant, like he had the coolest stories.”

“He was always nice and would take us on trips to cool places, and he was on the side-lines at AIMS Games giving us support,” said Mikyla Knowles, a member of the girls’ football team.

Having been designated a special ‘throne’ on stage, Mr Glover got up and spoke during the assembly. After teaching around 1300 students across 42 classes and coaching countless others, it was a big goodbye to be said.

“Work hard, it’s not the people who are the really bright top ones who make it, it’s the ones who work hard, and you’ll get there. Always look ahead, look ahead and do your best wherever you can.

“It’s a privilege to be here, and it is quite hard to walk away.”