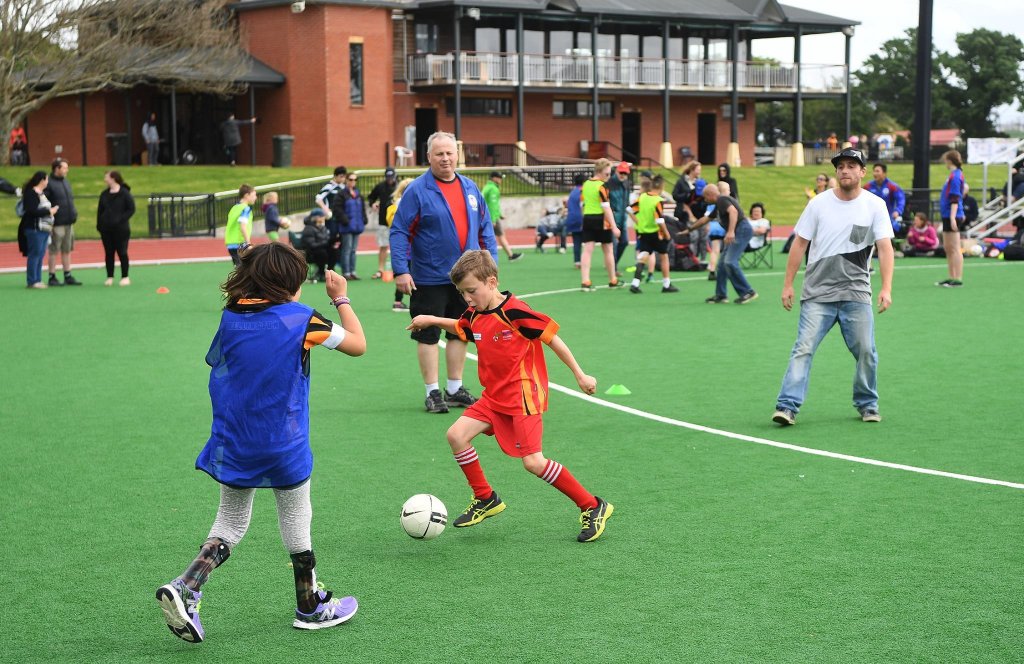 Andrew Fairweather competing in the soccer at the Halberg Junior Disability Games.

Three Cambridge boys were among the 146 athletes taking part at the recent Halberg Junior Disability Games in Auckland recently.  Andrew Fairweather (9), Ben Jenkins (12) and CJ Takiari (19) made the trip to King’s College for the annual three-day tournament, which ran from October 6 – 8.

Open to 8-21-year olds with a physical or visual impairment, the games were officially opened by the Governor-General, the Right Honourable Dame Patsy Reddy on Friday.  And then it was ‘game on’ for the athletes, who were representing 12 regions.

Andrew Fairweather, who has cerebral palsy hemiplegia which causes muscle and tendon weakness down his right side, said he had a wonderful time at the games and was proud of himself. “It was really great, I was trying my best, especially in the 50 metres (run), when I fell over but I just got back up straight away and ran. That was the best thing – I was proud of myself,” he said.  He also had the chance to go on a rowing machine, which he is keen to do again at next year’s games. Michelle Jenkins, mum of Ben (12), said he had a great time at the event and is also keen to go back next year. Ben sustained an incomplete spinal cord injury when he fell out of a tree at age nine, which means he cannot use his right arm and has a limp on his right side.  But he did not let any of that stop him from giving it his all at the games, where he took part in a raft of activities including archery, badminton, athletics, wheelchair basketball and table-tennis.

CJ Takiari also competed, part of the Waikato wheelchair basketball team that won the competition, and he was also named MVP for the sport.

Much to everyone’s disappointment the triathlon was cancelled due to bad weather, but they will all be back next year to give it a go.