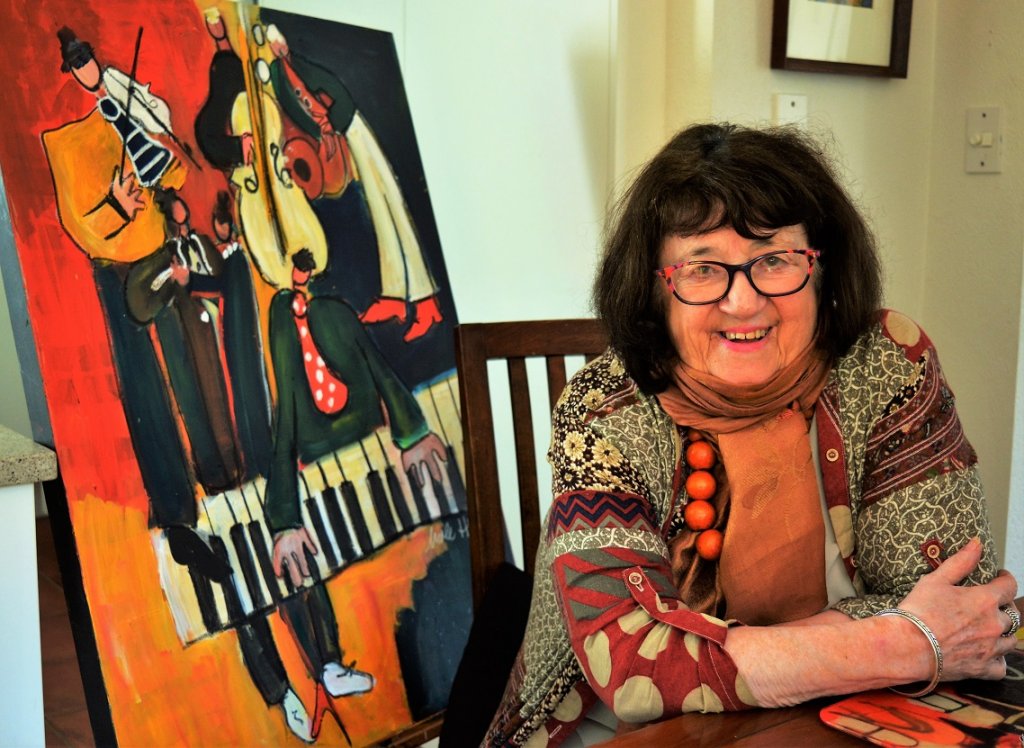 Carole Hughes with one of the paintings she has available for viewing at her Cambridge home.

One of Cambridge’s foremost artists, Carole Hughes, is opening her Queen Street home and studio this week as a gallery for her paintings.

Carole’s bold and colourful works have found favour nationally and internationally through most of the 25 years she has been painting.

Many of her works hang in corporate and government offices and in private homes around the world, while her online following brings in a steady flow of commissions.  She has exhibited extensively throughout New Zealand over the years, but more recently has limited that to an ongoing display of her work at Cambridge’s Heritage Gallery and in Wellington.

The decision to turn her Queen Street studio into another exhibition space allows her to make full use of her home’s unusual and light-filled rooms. To streamline the process, Carole plans to place a board at the top of her driveway when the studio is open, and asks those keen on visiting to call her beforehand.

“I do work out of my studio at home, but there is a chance that people just turning up might find that I’m not there.  It would be better if they called first.”

Cambridge has been home to Carole for around 50 years, and few who live in the town wouldn’t know her work well.  Brought up in Hamilton, she trained at the Ardmore Teachers’ College and then taught both in Hamilton and at Cambridge Primary School. For a few years before she started painting, it was spinning and weaving that satisfied Carole’s creative urges.

When she did pick up a brush, it was as something of a learning curve and more of a hobby.

“I did paintings for friends … never really took it seriously at that stage,” she said. “But then someone asked if I would have an exhibition. I said OK, and all of the paintings in it sold.”

From then on, Carole’s star rose quickly.  She became recognised for her unusual style, and every one of her works – large or small – became infused with the character and colour that defines the artist herself.

Carole started painting in the early 1990s, finding herself drawn to the bold brush strokes of the fauve art style. Over the years, she researched her favoured genre and experimented widely, continuing throughout to project her view of the world through paintings reflecting life in various parts of the world.

Many are strong, colourful images of simple street scenes in the quaint towns and villages of Europe, all delivered in chunks of colour with powerful suggestion displacing detail. Musicians are a favoured subject, she said. “I do a lot of work involving musicians, mostly because I love their movement as they play.”

Carole said she would be happy to show visitors around the different paintings displayed in her home and said she will talk about her style of painting to those wanting to know more about it.

“Not a lot of people paint in this style and people often find it interesting. I’d be happy to talk to them about that if they’re keen.”