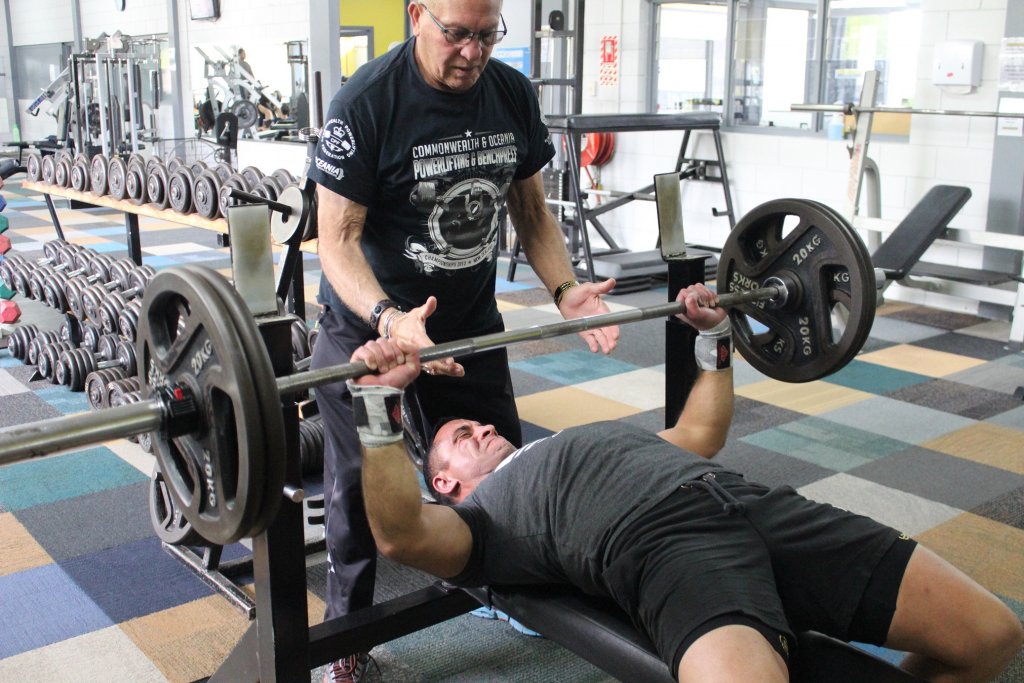 Doug McWatters is training hard under the supervision of his mentor, Doug Mienie.

It was quite a feat for Doug McWatters when he finished first in his division and 6th overall at the Waikato Bay of Plenty Powerlifting Novice Champs in Morrinsville last weekend.

Having only just taken up the sport 6 weeks earlier, it was the 38-year old’s first competition.

“I would have liked to get a bit higher with my numbers in lifting,” McWatters said, “but I suppose it was only 2 months of training and my first ever competition, so I am stoked.” 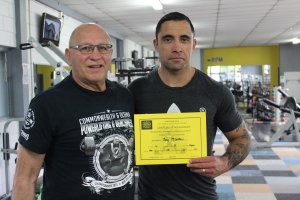 “I’m very pleased with him and I think he’s going to go a long way,” said McWatters’ coach Doug Mienie, Cambridge local and world champion powerlifter. “If he keeps it up, he’s going to be a real top lifter.”

Both Dougs train at the Cambridge Fitness Centre in Leamington, which Doug Mienie and his wife Dawn originally started up in 1985, now owned by Josh and Val Evans.

The duo is now preparing for McWatters’ next competition on November 18, the Waikato Bay of Plenty Classic Cup. They aim to increase McWatters’ combined lift weight by 40kg – across the three disciplines of the deadlift, bench press and squat.

Though he has plenty of natural ability, McWatters said the technique he has learned from Mienie has made all the difference. “The technique aspect of the lifting, I knew none of that prior to now, and I’ve found technique is key to lifting heavy weights, you just can’t do it without the proper technique, and it saves you from injury.” The ‘Dougs’ plan to increase Mc Watters’ 190kg squat to 205kg at the competition.

McWatters is no stranger to injury, having been the New Zealand Light Heavy Weight Kickboxing champion in 2006 and 2009, and then playing for the Taniwharau Premier League Team from 2010 until last year. 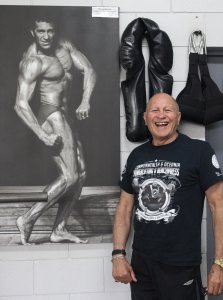 Doug Mienie competed at the 1990 Pan Pacific Body Building Championships, and the photo is still on display at the Cambridge Fitness Centre.

After clocking a 115kg bench lift, a 190kg squat, and a 225kg deadlift at the Novice Champs, both Doug and Doug are confident McWatters will be able to achieve 130kg on the bench, a 205kg squat and 240kg deadlift at the upcoming competition.

“My focus is always winning, losing is not an option with me!” said McWatters.

It’s safe to say that his training is in safe hands, considering Mienie has represented New Zealand in powerlifting four times, setting four Oceania records and four Commonwealth records.   And in the Waikato/Bay of Plenty alone, he has set 21 records.

Doug Mienie says other locals interested in getting involved in powerlifting are welcome to join in and start training, even if your name isn’t Doug.