Andrew Mowlem on his was to the finish line. Photo – Carl Gordon.

It was a repeat of success for Auckland’s Andrew Mowlem as he finished the 23km Cambridge to Hamilton Paddle Race on Sunday with a first-place finish for the third year in a row, clocking in with his best time so far of 1 hour and 26 minutes.

It was less than a second ahead of fellow surf ski competitor and Aucklander Sam Mayhew, also competing in the Male Open (18-39 age group), followed by another Aucklander Garth Spencer, just one second behind and first for the Male Vets 40-49 age group.

Next was yet another Aucklander and also a Male Vet, Sean Murphy, finishing in fourth less than four seconds later on a surf ski.

Male Master (50-59) competitor Kim Harker from the Bay of Plenty finished in fifth overall and as the first non-surf ski racer, instead competing in the multisport kayak division. It wasn’t an easy feat for the record-141 competitors taking part in the gruelling event on the Waikato River, but reasonable weather and a current working in their favour made it all the more achievable.

The most popular division with 38 competitors, “Stand Up Paddleboard 12’6 and Over”, saw a tight scramble for the finish with Male Open competitors Sam Thom, Marius Lina and Matt Anderson (all Auckland) rounding out the top 3 just seconds apart, Sam finishing four seconds ahead of Marius, who was less than one second ahead of Matt. Five more males rounded out the top 8, followed by Auckland’s Victoria Stuart as the first female in the division.

But it wasn’t just Aucklanders that took the top titles. Cambridge High School’s Jessica Gosling won the major spot prize of a single sea kayak from Stellar Kayaks, after being the first female to finish in the single sea kayak division, and 6th overall with a time of 2 hours and 11 minutes.

Over in the schools double kayak division, two Cambridge High School teams topped the tables in first and second, the first team included Fraser Bain and the second included Sam Bain. A St Peters team rounded off the podium in third.

The “Cruiser” class is always the most interesting category in the Cambridge to Hamilton Paddle Race, open to all types of paddle-powered vessels. Entries in the past have included a student-built floating party platform powered by pedals – which unfortunately was not topped at this year’s event! Categories also included waka ama (dragon boats) and a wide range of canoes and kayaks.

Top placed finisher Mowlem said the river was flowing noticeably faster this year and was also much higher – to the point where the little beach near the finish line was almost submerged. It created more swirling water around obstacles such as trees, Mowlem said, which meant competitors had to keep their distance and paddle safely.

But luckily all went down without a hitch or any injuries. Organisers from The Boat Shed (Cambridge) said they were rapt the “weather gods” pulled through on the day. 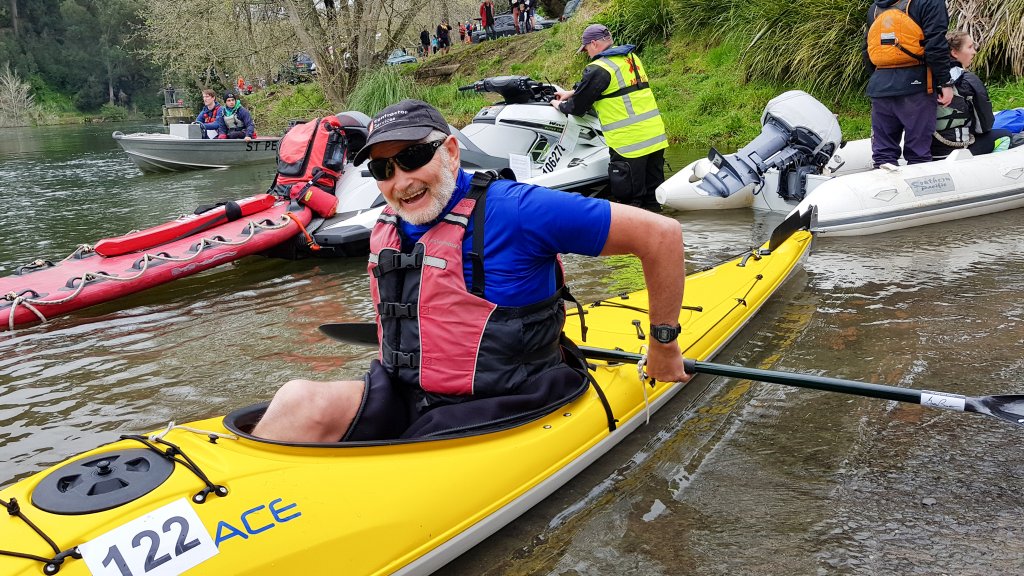