Three down and two to go – that’s the latest status of Cambridge’s bid to win five major regional football titles. On Saturday, the club clinched the WaiBOP Championship – the second highest level of men’s competition for the Waikato/Bay of Plenty – with two games to spare, beating Matamata Swifts 2-0 in a local derby.

Immediately after, Cambridge’s first team secured the WaiBOP Challenge Shield for the summer after successfully defending it against Rotorua United with a 4-1 victory. These titles will now join the Waikato Women’s Championship taken earlier this season by the club.

In what could become the club’s most successful season ever, Cambridge are still primed to take two more trophies:

The Loaded WaiBOP Premiership – the top level of men’s competition in the region, where Cambridge lead the competition by seven points and can win it with one draw or victory from their remaining three matches; and the Soccer Shop Waikato Cup – the top knockout competition in the Waikato, for which Cambridge’s B team will contest the final next Saturday.

The weekend started well for Cambridge on Friday when former player Chris Wood scored a hat-trick for the All Whites in their FIFA World Cup qualifier, won 6-1 against the Solomon Islands. And it just got better as games unfolded. With only five minutes gone, midfielder Theo Petropolous and striker Donovan Latham combined to set up Tom Wouterson for the opening goal. A few minutes later, Cambridge goalkeeper Fraser Nichols made a full-stretch save, one of several key saves he made during a game made difficult because of a wet surface and slippery ball.

Cambridge doubled their lead in the 13th minute when a corner was not cleared by United and skipper Patrick Woodlock found the net after being first to react when a shot rebounded off the bar. The Reds went three goals clear in the 21st minute when Joshua Clarkin used his height to powerfully head home a cross.

On the half hour, striker Callum MacLeod stretched the lead to 4-0 with a coolly taken goal, stepping round Rotorua ‘keeper Andrew Gibbs. Knowing the job was as good as done, Cambridge relaxed in the second half and Rotorua took advantage, having the better of some periods of play. They pulled a goal back in the middle of the second half but Cambridge wound down the clock to make sure of the three points. Player of the Day was Kyle Stead.

The postponement of games involving nearest rivals meant Cambridge could not claim the title on the day, meaning a win or draw against Te Awamutu in the next round will confirm the Premiership – or if Waikato Unicol and Matamata Swifts drop points, the title still comes to Cambridge. 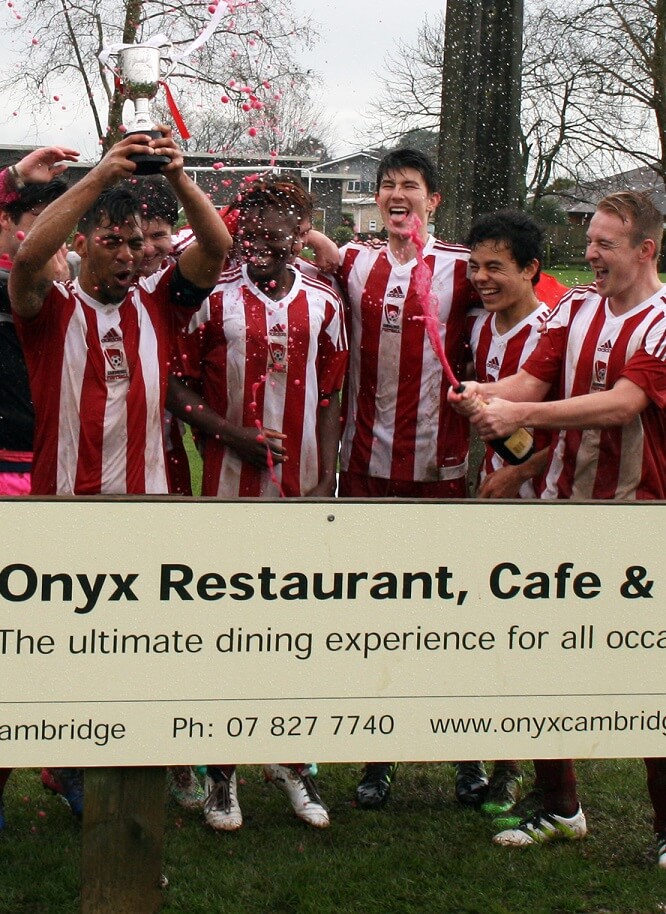 Cambridge’s Championship title-winning match was found in typical fashion – two goals from leading goalscorer James Cakebread and a deserved clean sheet from a hard-working defence. The match was played in difficult, wet conditions but Cambridge moved the ball about well, forcing Matamata Swifts to chase. Teenager Cakebread scored twice in the first spell, taking his tally for the season to 16 – almost a goal per game.

In the second half, Cambridge kept control of enough possession to starve the visitors of chances and eventually the final whistle went, confirming the title had been won. The win completed an eight-match unbeaten run which had taken the Reds clear of its rivals in a closely-fought competition.

Cambridge’s 14 wins and five draws from 19 competition games means the side can play its final fixtures (against Te Awamutu and Waikato Unicol) knowing the results are merely of academic interest.