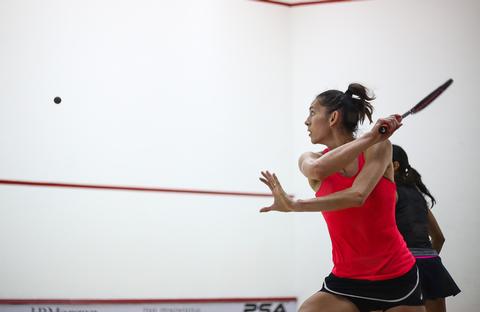 The winning streak came to an end in the women’s semifinal.

Cambridge’s squash superstar Joelle King finished her winning streak at the 2017 J.P. Morgan China Open with a loss to world No.1 Nour El Serbini of Egypt during the semi-final round on Sunday, not before making her mark in a string of stellar performances at the competition in Shanghai.

It started on Friday with the defeat of one of her main rivals, world no. 4 Laura Massaro, across four games.

The first game saw King finish with a dominant 11-0 defeat before she doubled her advantage, winning 11-6, 7-11 and 11-4 in the proceeding games.

“I felt good out there, Laura is no mug, she won here last year, so to come out and win in four is really positive,” an elated King said on Friday, having lost to Massaro three times in the past year.

The day after dethroning the English 2016 tournament champion, King went on to score another big win at the US$100,000 competition with the defeat of eight-time World Champion Nicol David (Malaysia).

King, who had fallen victim to David in all ten of their past encounters stretching back to 2010, twice came from behind continuing the form and fluidity that had carried her to a 3-1 victory over Massaro, this time out muscling David in a high quality 66-minute encounter across five games to finish with scores of 8-11, 11-8, 4-11, 11-7 and 11-5. 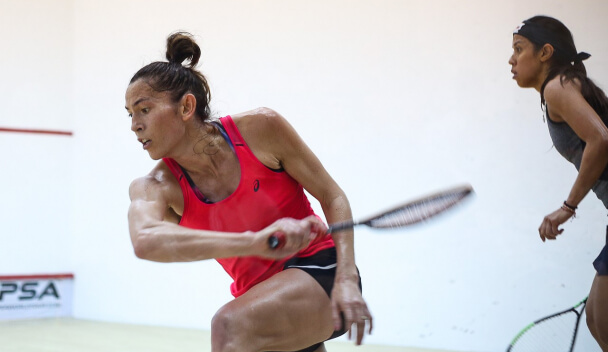 It was David who started brighter, finding her rhythm early on to take the opening game before King began to open up the court, varying length and pace to force David onto the defensive foot and level. She continued the process through the third and fourth games as World No.11 David fought back to force a decider, but King looked the stronger player as she brought the game to a close with a convincing 6-point lead.

“It’s been a while since I’ve played as well as this so I’m trying to enjoy the moment – to beat two legends of the game back-to-back is a great achievement,” King said following the game on Saturday.

“I had never beaten Nicol before and I was behind twice there. I’m pleased with the way I managed the mental side of the game and stayed tough in there and it’s nice to finally get that win over her.

“But it’s just pleasing to be playing some of my best squash. It’s all well and good to get those two wins but there are two more matches to come to win the tournament and I’ll need to refocus to make sure I’m at my best again tomorrow.” The women’s semi-final paired King against world No.1 Nour El Serbini, finishing with a loss for the Kiwi after five straight games of 12-10, 11-4 and 11-6 over 29 minutes. The physical play and speed of King around the court was nullified by El Serbini use of precise placement.

The men’s side of the competition was also dominated by a World No. 1 player from Egypt, Ali Farag, who won the men’s semi final over Kiwi player Paul Coll.