Hot topics in election lead up discussed at Coffee Catch Up 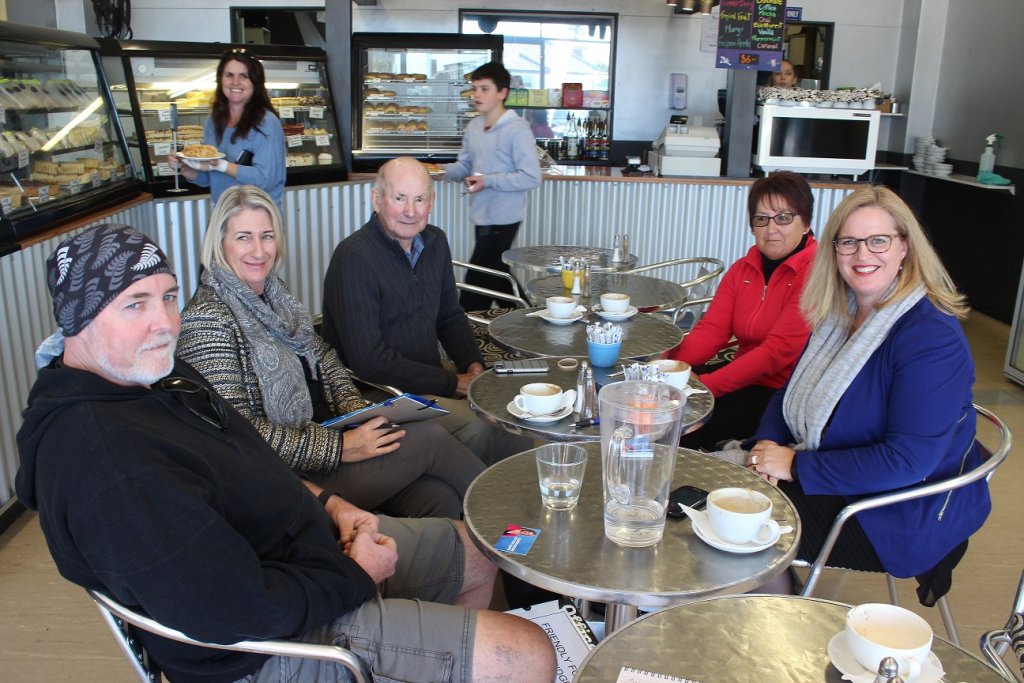 Around half a dozen people turned out for the Coffee Catch Up on Friday.

A small gathering of just over half a dozen people turned out for Hon. Louise Upston’s “Coffee Catch Up” event at Scott’s Café in Leamington last week, where locals got the chance to speak with our electorate MP about whatever topics were on their minds.

From investments in mental health to water tax and trade, a range of subjects came up during the friendly, informal gathering.

The recent antics of New Zealand politics, such as the Green Party’s “blunders” as highlighted by one person, provided a good giggle for some, with Hon. Louise Upston commenting, “I tell you it’s definitely not a dull election! But if anything it’s made people follow it a bit more closely which is good for democracy.”

One local said they saw Labour and National as “looking pretty close” in terms of favourability in the lead up to the election, and asked whether National would be working with other parties.

“We campaign on our record and what we want to provide for New Zealand, and we want to go out there and win as many party votes as possible, that hasn’t changed,” explained Upston. “Once we get to the election, we’ll know what the results are, and then it’s generally been… the party that has the highest percentage of party vote is in the strongest position to look at forming a government with support parties, so whether that’s National or whether that’s Labour, that will be decided by the voters.

“It’s not going to be Labour!” joked one person.

“I couldn’t possibly comment,” Upston said with a smile.

She later added, “I think, the thing that people are saying to me, whether it’s in the street or whatever, is actually that they don’t have a lot to complain about. They’re comfortable with how things are tracking, they’re comfortable with how the economy’s going, they can see the level of investment locally in infrastructure, in school property, in educational achievement, free GP visits for kids under 13, the family incomes package, they’re all things that they can see are benefitting them and their families.”

Hon. Upston also commented on National’s push for greater trade partnerships. “You need more customers to sell your goods to, to grow your business. And that’s no different for us as a country… where as other local parties will not support the new version of the TPP, the TPP 11.”

Aimed to be pushed “over the line” by 2020 if National remains in Government, the TPP 11 agreement would open up free trade agreements with the European Union, the United Kingdom (post-Brexit), Sri Lanka, Brazil, Argentina, Paraguay and Uruguay, opening the door to 2.5 billion new consumers.

“We’re going to renegotiate the China Free Trade agreement,” added Hon. Upston, “We need to get agreements with new countries that we haven’t signed up before… Japan alone is the 4th largest economy, we want to be selling goods to them. When we do that, local businesses grow, and we all benefit. I think that is one key area of difference that we see, we’re embracing international trade.”

Hon. Louise Upston will be taking part in the upcoming “Meet the Candidates” event on September 17 organised by Cambridge Grey Power, where Winston Peters and representatives of various NZ political parties will all gather in Cambridge to discuss key election issues and topics, and field questions from the public.

“We’re rolling out new policy and announcements just about every day, in this period as we lead up to the election, so by then (September 17) there will be a few other things that we will have announced, so I’ll no doubt be talking about those,” Upston said. “The Meet the Candidates events are always good when there’s a good range of candidates there… it’s always interesting!”

Keep an eye out in Cambridge News for more details on the upcoming “Meet the Candidates” event.