EV racers all set to compete Leardt Erasmus works on his project.

Two electric-cart building teams from Cambridge High School (CHS) are reasonably ready and rearing to go heading into the EVolocity Regional Finals in Tamahere this weekend.

Five CHS year 13 students have been working on their electricity-propelled projects since term 2 of this year, collaborating their ideas and honing in their skills to produce two 2-wheeled bikes powered by electric motors.

The regional final of the EVolocity competition takes place this Saturday at the Kartsport Track on Airport Road, where the CHS boys will compete against dozens of other projects from 13 schools.

All teams taking part in the competition were challenged to design and build their own electric cart or bike, equipped with an electric motor kit provided by EVolocity competition organisers. Planning began at the start of the year, with construction commencing in term 2.

The two CHS projects began to somewhat take shape in the weeks following, but trial and error learning curves meant that the bikes had to be taken apart and reassembled several times before the completed projects were ready to race. Final touches were being made this week.

“They’re students, and it is a big project, so they’ve got to make sure they have all their ducks in a row, and they’ve learned over time that if you don’t, things don’t go as planned,” explained Bruce Siriett, technology teacher at Cambridge High School and mentor to the two teams. “I’ll let them know what will work and what won’t, and sometimes they’ll listen to me and sometimes they won’t! But that’s part of the learning is solving problems, some of the teachers that do this competition can sometimes be quite controlling, but really, you learn better if you make stuff ups. I can tell them and tell them but until they experience it… If you make a mistake and you learn something from it, you’ll never forget it.”

Both CHS teams have each designed a bike. 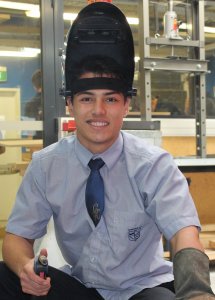 “Jarred and I both agreed we wanted to make something with two wheels, because it had a lot less rules (for the competition) and it seemed fun to make, and faster to make,” said Leardt Erasmus, whose partner Jarred Treymane was absent on the day of interview. “We went for speed, we wanted it to be as light and as fast as we can, so hopefully we’ll do well in the drag race.”

The competition on Saturday will see teams compete across a range of categories, the most “exciting” being the big drag race and street race. Other categories include “Economy Drive” (electricity usage), rolling resistance and “Show & Innovation”.

Both CHS teams hope to do well in the Show & Innovation division. The other CHS team, which includes Reuben Theron, Marvin Li, and Michael Arnott, believe they have a good chance in this category after crafting a beautifully vintage-style bike.

“We decided we were going to do a two-wheeler, and while we were still designing it we got the idea of making it like a vintage-looking bike, so that’s why we have the (fake) gas tank underneath, for the look,” explained Reuben. “We wanted to make it look as vintage as possible.”

The boys had to learn how to shape and mould fibre glass to make the stylish casing. “It came out a lot better than I thought it would,” said Reuben.

Though both teams had a few hiccups, from incorrectly-placed wheel brackets to different sized sprockets, chains and other parts which didn’t match up, but with the help and guidance of their teacher, in the end their projects came together and were being finalized and fine-tuned in the days leading up to competition. 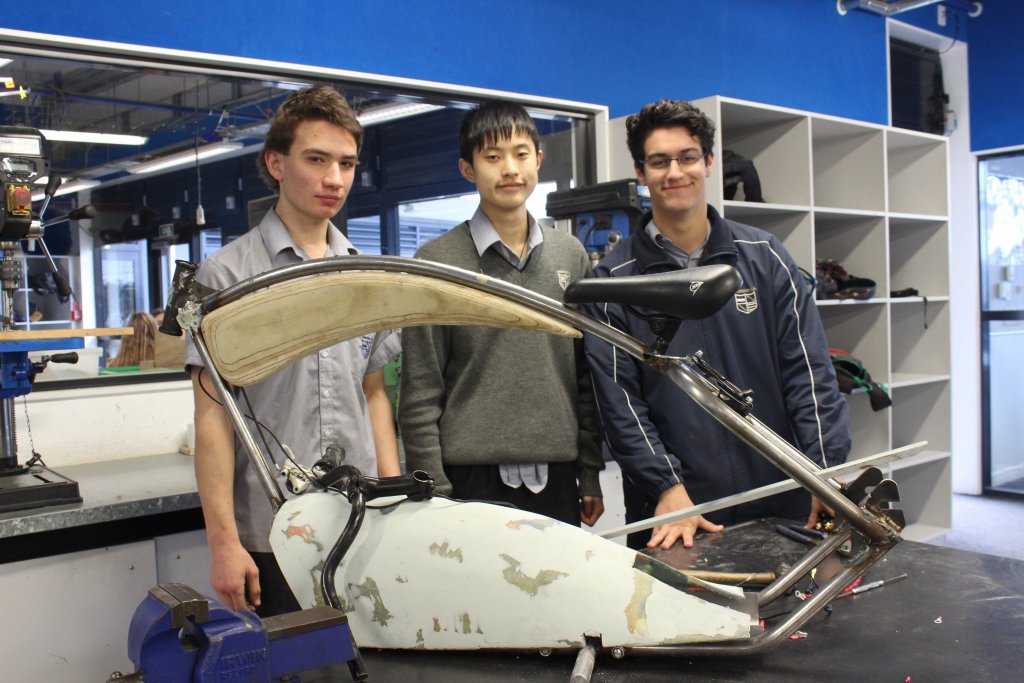 When asked whether they felt ready for race day, Reuben replied, “I suppose! Well I am, I don’t know about Marvin!”

“He is anyway,” Marvin added with a smile. Marvin, being the most light-weight member of the team, will race the bike on Saturday. In the other CHS team, Leardt will likely be the designated driver, or both he and Jared will have a race each if allowed.

“I reckon it’s pretty cool,” Leardt said of the near-completed bike. “It’s our first time doing this, so I reckon, because of that, it came out pretty good.

“It has been a good chance to build up our common knowledge as well, like with a lot of the small things, you’d make a mistake, think ‘how do I do this’, and you’d learn from it.”

When asked how he thought the teams would get on at the race day on Saturday, Mr Siriett was quite honest in saying, “I don’t know!” but had confidence in the boys’ projects and abilities as they head towards the big day.

Members of the public are welcome and encouraged to head along to the EVolocity Waikato regional final at Kartsport Hamilton, Airport Rd, Tamahere, from 9am to 3pm (free entry) this Saturday 16 September. More information is available at www.evolocity.co.nz.