Leardt Erasmus on his way to winning the Drag Race. Photo – Michael Jeans.

Cambridge High School’s two teams competing in the EVolocity regional final started the day on Saturday with an accomplishment in itself, having completed their projects in time and up to standard.

“And they kept going all day which was good!” their mentor and technology teacher Bruce Siriett said. “I think to design a bike, make the bike, get there and have it perform okay or at least get through the day without breaking down is an accomplishment in itself for a lot of students,” he said. “And to get an award on top of that is pretty good!” 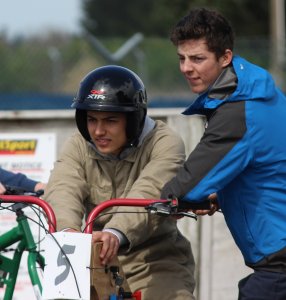 The Cambridge High team of Leardt Erasmus and Jarred Treymane was awarded with the title of “Fastest Bike” in the competition, finishing the Drag Race segment in first place, clocking in 38kmph across a 50 metre stretch.

“That was a pretty good effort, well, obviously since they were the fastest!” said Mr Siriett.

“I guess the main thing was that no one hurt themselves, nothing broke down, and they seemed to have a good time.”

But the other Cambridge High School team, Reuben Theron, Marvin Li, and Michael Arnott, did have a bit of a hiccup ahead of the Street Race round, in fact at one point it looked like they would have to pull out of the competition!

The chain on their bike kept coming loose and falling off the cog due to the wheel moving forward, but with the help of their trusty teacher they were able to fix the problem just a matter of minutes before they were due to compete.

“We did a bit of a band aid repair and stopped it jumping off the cog, so that they could compete in all the events.”

Though the team didn’t finish up with any prizes, Mr Siriett said simply, “I’m just pleased they managed to take part in all the events!” With 15 school teams competing against each other on the Kartsport track, and around a hundred spectators watching, it was quite the culmination of what was a mammoth project for many throughout the school year. The top schools at the competition will go on to compete at the national final in Christchurch.

Now with the event over, the local students will be able to keep their creations as a reminder of their hard work and perseverance throughout their final school year.