Joe Bourke goes in for the kick.

Battle of the Bridge was once again a resounding success for 2017, with well over a thousand people donning their rain jackets and turning out to the Leamington rugby grounds to show their support.

Organisers were relieved to see the morning’s showers clear before the rugby kicked off at 2pm. A tragic fatal accident on the low-level bridge caused traffic to congest along the high level bridge and through town, making many of the fans late for the game.

But as the first half got underway, more and more spectators packed the side lines as the Leamington Loonies began to take the lead in the first quarter. 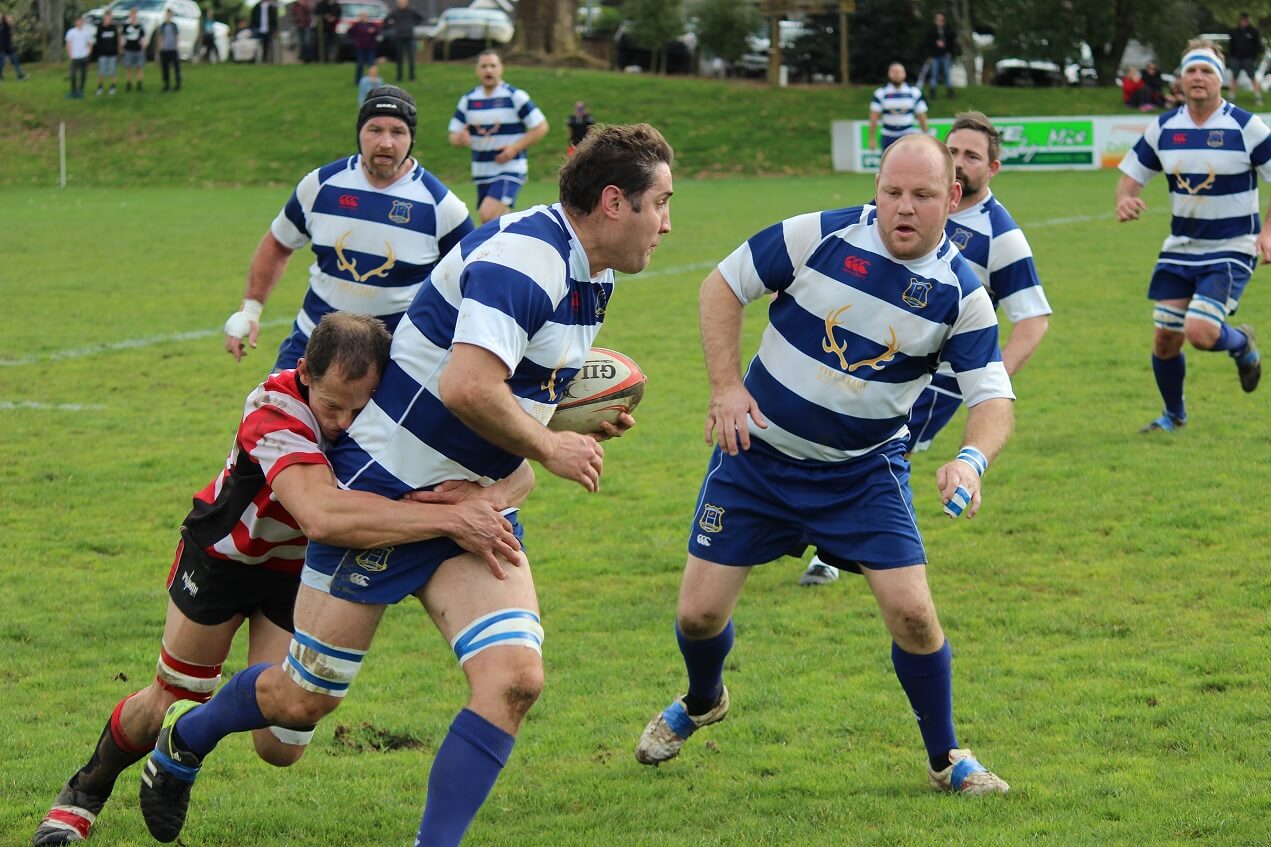 Leamington Loonies began to take the lead in the first quarter. Jason Cudby charges with the ball as Cèdric Delevallèe tackles, James (head gear) and Hayden Wade coming to his aid.

But it was the Hautapu Hopefools that scored first, with a penalty goal from Cam (Beaver) Bourke to lead 3-0.

Hautapu player Glen “Grumpy” Wallace soon had to leave the field after sustaining a broken arm during a tackle.

A midfield grubber (kick) was picked up by Bob Aitken out wide, with an unsuccessful conversion leaving the score at 5-3 to Leamington. 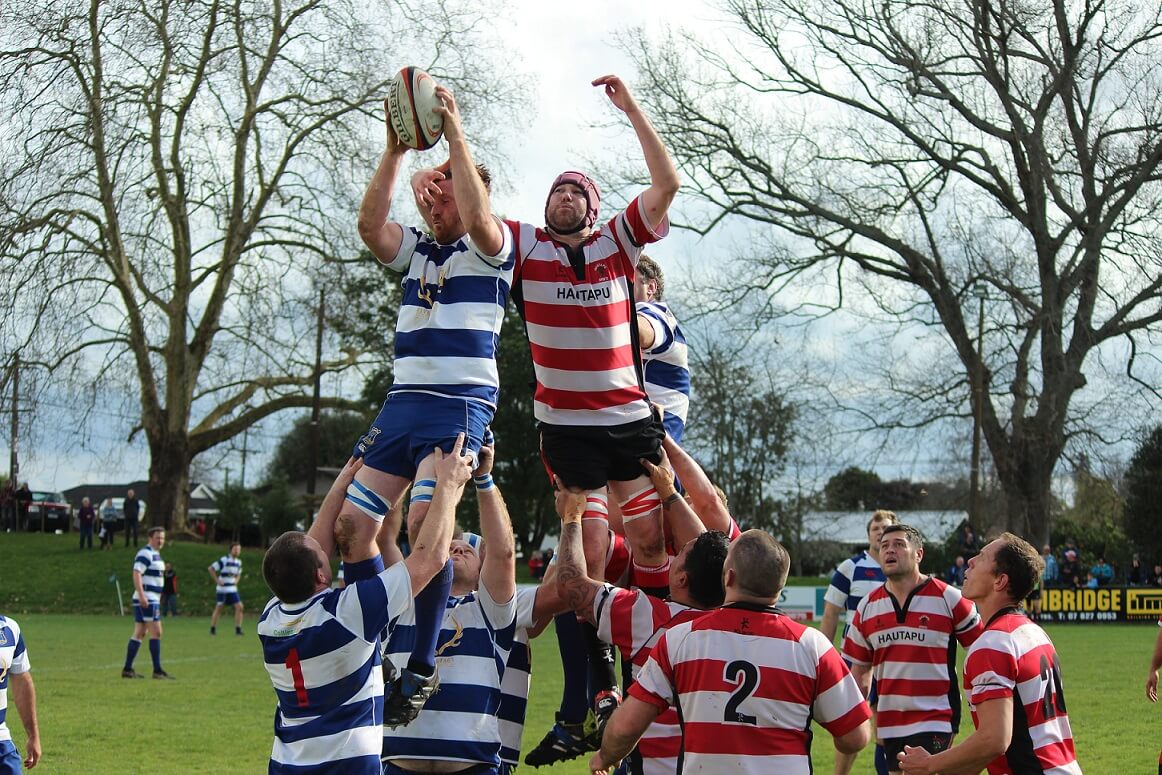 Ron Sebeck takes the ball as Aaron Cogswell misses and grabs his head!

“Both teams exhibited a high skill level and created opportunities but the defence was brutal and hard to crack,” said Leamington Club Chairman Dave Peters.

A golden moment unravelled as Hautapu pressed hard on attack, only to spill the ball forward in a tackle. Leamington player Jason Cameron, playing on the wing, scooped the ball up and sprinted 90m to score in the corner. Unconverted, the score sat at 10-3 to Leamington.

Hautapu’s forwards used their superior size and great technique to maul 20 meters upfield, overcoming the defence for Gav Stowe to score out wide, a try which was converted by Cam Bourke to bring the half time score up to 10 all. A volunteer team from the Hautapu Club won the women’s tug-of-war contest.

The volunteer women’s tug-of-war contest was held during the rugby’s half time break, won by representatives of the Hautapu Club. The second half saw a wrestle for power between both teams until Leamington centre Piri Bennet unlocked the midfield defence with nimble footwork to score close to the posts. Daryl Bennison then converted the try, 17-10 Leamington. 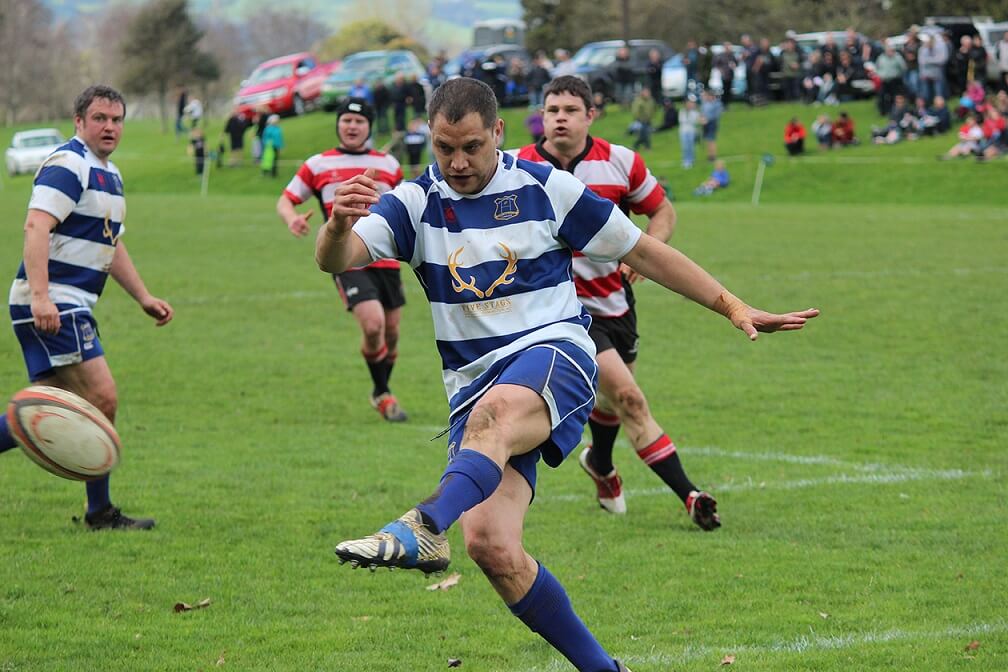 Within the last 10 minutes of the game, Leamington were reduced to 14 players as blindside Ron Seebeck was sent to the bin with a yellow card, the first in Battle of the Bridge’s history. Hautapu took full advantage with Brigham Nordstrom scoring a converted try close to the posts. This brought the score to 17 all, which was maintained until the end of the game, with perfect timing as a cold shower of rain started to set in. The rugby game’s end came just in time as a cold downpour set in.

The result was the second tie in Battle of the Bridge history. Though some believe Leamington should keep the Battle of the Bridge trophy, being last year’s winners, the two clubs will now share the trophy for six months each until next year’s event, to be held at the Hautapu grounds. Ron Sebeck attempts to take down Gavin Stowe as he races toward the try line.

As the bitterly cold downpour set in, rugby players were quick to get into the showers as the unfortunate netball players soon took to the courts for the netball match. 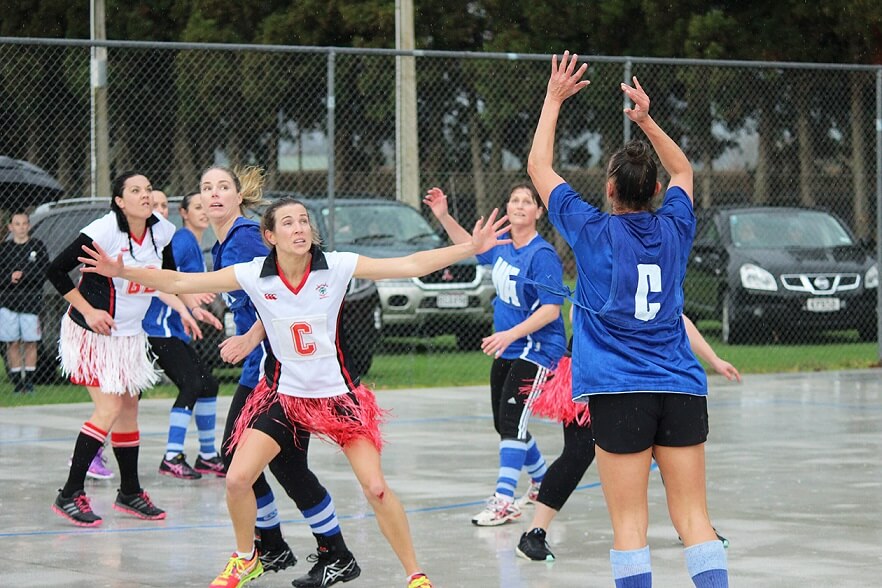 It was a tight game for the netball players, Leamington winning 24-20.

The netball proved to be a tough fought game, with both teams giving their all and fighting neck and neck towards the finish. In the end Leamington took the win, 24-20. As the day’s games came to a close the Leamington clubrooms became packed with locals sharing a friendly drink and banter with old friends. Live music, a roast dinner and the All Blacks match on the big screen made for a great evening. The official prize giving saw the skippers for both teams receive the trophy jointly, whilst the tug of war shield was handed over to Hautapu and the netball cup trophy handed to Leamington.

“The girls were very happy, they were using that cup to good effect right into the night!” Laughed Dave Peters. Many of the winning netball players celebrated right into the night.

“It was just absolutely an epic game, just amazing,” said the event’s co-founder and Hautapu Club member, Mark Nogaj. “Every single player gave it 100 percent, there was just nothing left in the tank come full time. It was great to see the range of ages on the field, guys who were in their 60s playing their heart out.

“There could be friendly arguments for a long time to come as to who was the better team, that’s a debate for the times. But another draw, it just goes to show how close it is every year.

“And a big thank you to Cambridge News for again being sponsors, they’ve been with the tournament the whole way through.”

Dave Peters wished to thank Mark and fellow event founder Mike Cochrane, also a Hautapu Hopefools player, for putting the event together. “And thanks to the fantastic supporters,” added Dave. “Next year will be a cracker.” Mike added thanks to the Leamington Club and their support staff for organising another great event this year.