A serving of pickleball 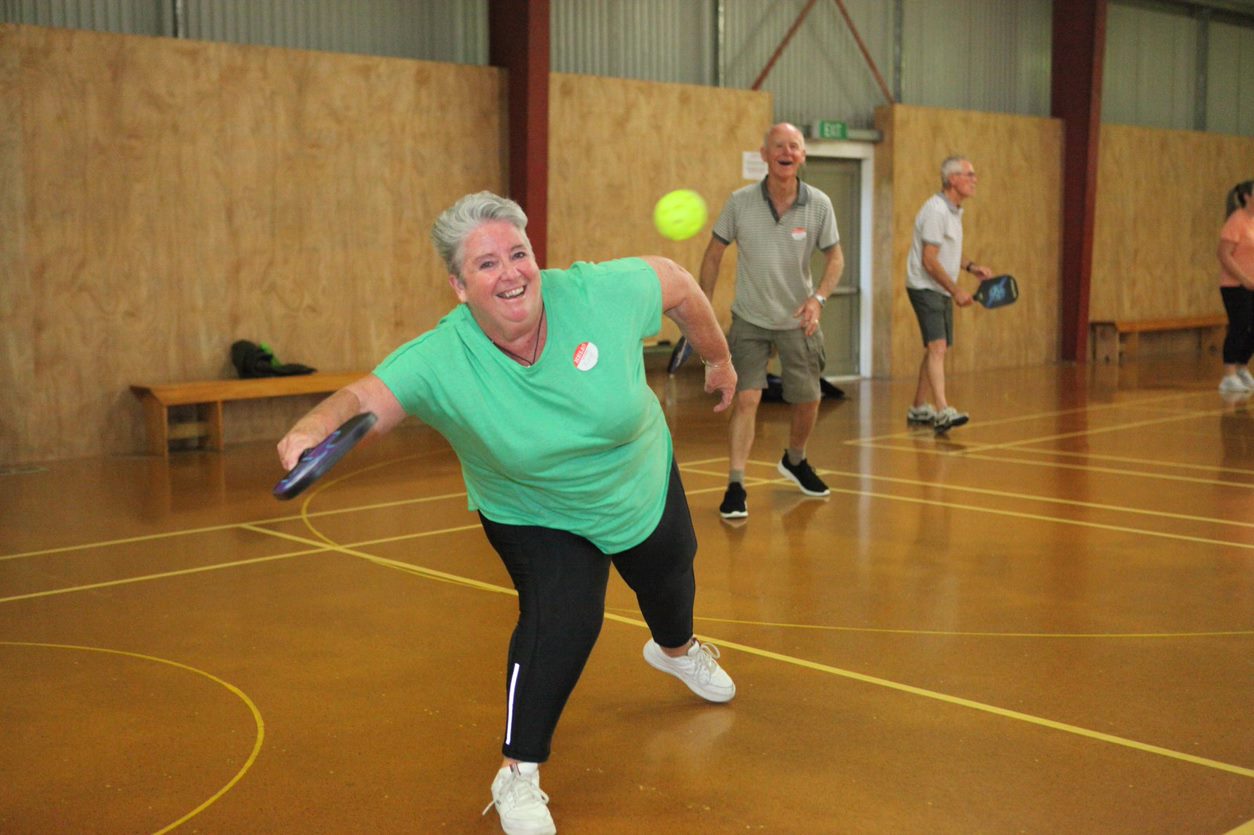 Kath Carmody gets stuck into a pickleball game at the Cambridge Badminton Stadium.

It’s got a quirky name, its ball has a Swiss cheese vibe, and locals are going crackers for it.

Pickleball, a fusion of tennis, table tennis and badminton, is whetting the appetites of young and old in Cambridge, attracting players aged 12 to 70-plus.

“I’ve played tennis all my life and I had to stop playing about 10 years ago because arthritis was causing some issues in my elbow, which I hated,” he said.

“I loved playing tennis; I loved the competitive part of it, I loved the social aspect as well. And suddenly pickleball brings all that back.”

Pickleball was invented on Bainbridge Island in Washington, USA in 1965 by Joel Pritchard, who later served in the US Congress as Washington’s lieutenant governor, and his friends Barney McCallum and Bill Bell.

According to Wikipedia, the three dads returned from golf one Saturday, found their families bored and challenged them to invent their own game.

Controversy remains over whether the sport was named after the Pritchards’ family dog, Pickles, or because Joel’s wife Joan had remarked the game reminded her of pickle boats, where oarsmen were chosen from the leftovers of other boats.

Now enjoyed across the globe, the game is played on a badminton court with a tennis-height net, using a hollow plastic ball covered in holes and an oversized table tennis paddle.

It can be played as singles or doubles and has been the fastest growing sport in America for two years running according to USA Pickleball’s website.

“There are over 4.8 million pickleball players, or “picklers”, in the United States, according to a 2022 report from the Sports & Fitness Industry Association,” said USA Pickleball’s director of communications and content, Melissa Zhang. 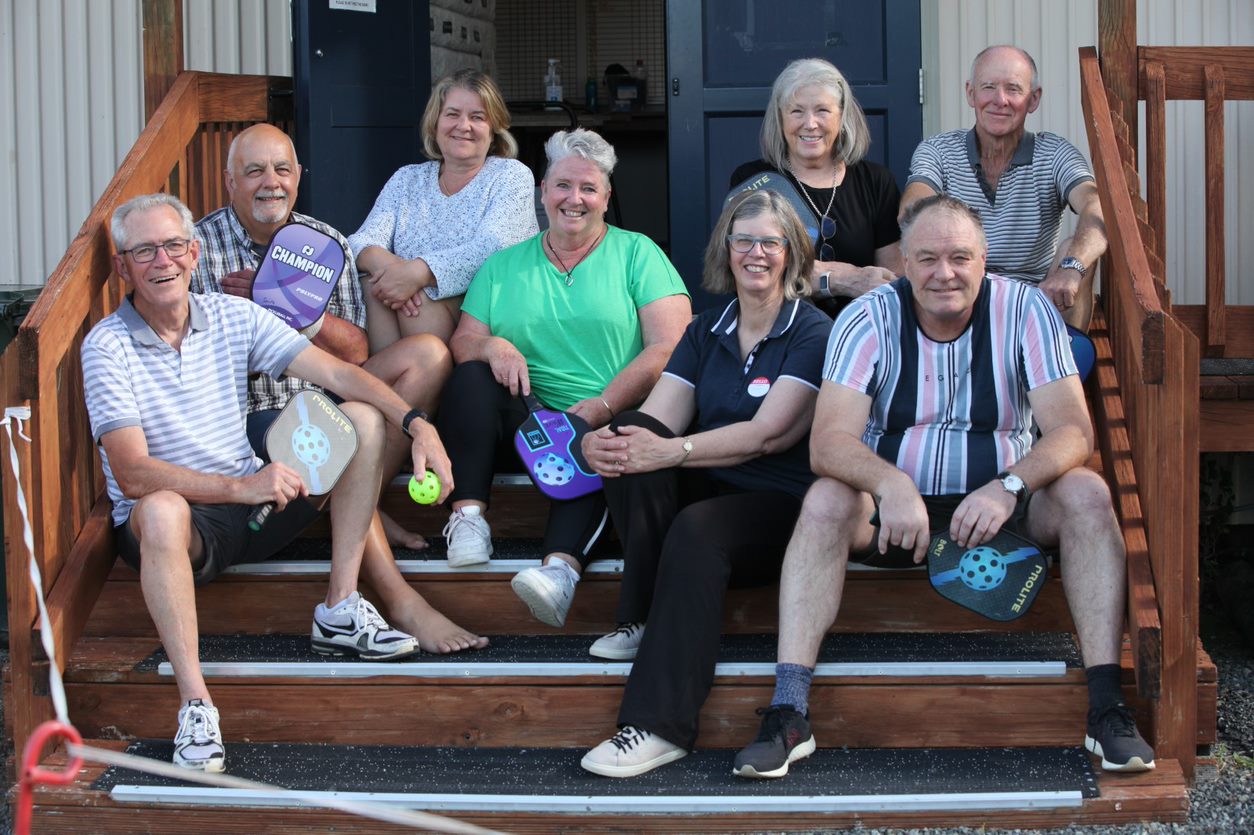 “It’s reputedly the fastest growing indoor sport in the world,” he said. “We have 40 clubs in New Zealand.”

Mark discovered the game through his brother-in-law, who had been playing in Whitianga. He drove to a club in Morrinsville to give it a crack and was instantly hooked.

“It was a real revelation because I thought that side of my sports life had really gone,” he said.

“I think that many pickleball players are like me; they’re broken down tennis players who just love the game, love the concept, but for one reason or another their bodies just aren’t doing the job for them to allow them to play tennis.”

Now, he and his wife Janet have teamed up with six other fans of the game – Alison Saville, Ewan Hunter, Danny and Ali Beskalo, Kath Carmody and Thane Haarhoff – to launch Pickleball Cambridge.

“We’re just on the verge of being a club, I suppose,” said Alison, a retired knitwear manufacturer who moved to Cambridge with her husband Ewan about 18 months ago.

“We’ve got people interested and a number of people are coming along regularly. We’re obviously always looking for new people, but we’ve probably got 60 or 70 people on the list.”

The group is running games at the Cambridge Badminton Stadium on Wednesdays from 3pm-6pm and encouraging anyone interested to rock up and give it a thwack.

Alison said pickleball was the only team sport she had ever enjoyed.

“This is the amazing thing,” she said.

“I was sort of like a tramper, I was never into ball and racket sport. I felt I was useless, just never did it. I don’t know what it is about pickleball; it’s very hard to put your finger on what it is.

“All levels of ability can play it and have quite a satisfying game. There’s not many games where you can have four people on the court and have one or two that actually aren’t that great, but everyone still gets a decent sort of game. Grandparents can play with their grandchildren.”

Cambridge social badminton player Wendy Murray, who has just given up tennis, is a recent pickleball convert.

“There’s not so much movement, I think, as tennis,” she said. “It’s a little bit easier. The ball doesn’t bounce the same as a tennis ball and you’ve got to be right up near the ball, whereas in tennis there’s a lot bigger area to cover because the ball bounces a lot further.”

So far she’s enjoying the “game for all ages” and she hopes Cambridge “can get a good club going”.

“People are fun and the game itself I’m learning,” she said. “I’ve made one mistake today on the rules, but every time I come I learn a new rule, so I’m getting there.”

Local pickler Thane Haarhoff, who started playing about three years ago in Wellington, loves “that you can teach somebody to play in about 10 minutes and then they’re up and running with it”.

“Pretty much everybody who takes it up, within five minutes they’re like that’s it, this is now my sport,” he said. “But it’s much, much harder than it looks. Because to be really, really good is not easy.”