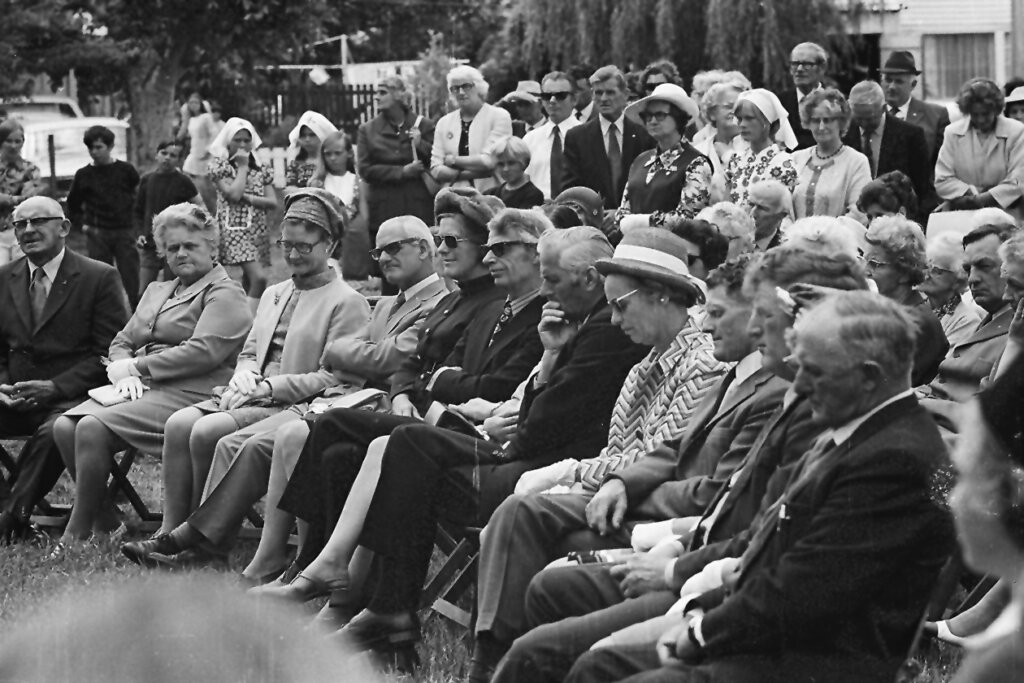 A photo taken 50 years ago this month by Michael Jeans at the opening of the Cambridge Resthaven community-owned rest home on November 25, 1972, has rekindled some memories. The photo went with a story about a 50th anniversary event in the form of an afternoon tea which will be held on November 25 for Resthaven residents and staff – and an invite has also gone out to anyone who was at the opening. “The two people sitting in the front on the far left are Bill and Dorothy Robinson from Robinson Rd Roto-o-Rangi… they are my parents both since died,” Margaret Hodges of Lauriston Park told us. Margaret left Cambridge 54 years – but returned five years ago, and her sister Maureen Cameron left about 60 years ago and came back six years ago. Margaret Dodd also saw the photograph – and called The News to say she was in it. Margaret moved to Cambridge in June 1957 and is a long-time friend of Resthaven – she recalls the first sod being turned for the project. Today she describes herself at “retired but still very busy”. And thanks to seeing the photo, a trip down memory lane back to Resthaven with a copy of the November 3 edition under her arm is on the calendar. Are you in this photo showing some of the guests at the Cambridge Resthaven opening 50 years ago? Email [email protected]

Cambridge Resthaven is poised to celebrate its half century later this month, with events planned for November 25 and 26.

The commemorations celebrate the opening on November 25, 1972, of the Cambridge Resthaven community-owned rest home, an event that marked the culmination of eight years of planning and fundraising by the community and the opening of Cambridge’s first rest home.

The first 50th anniversary event will be an afternoon tea on November 25 for Resthaven residents and staff.

Resthaven is inviting anyone who was there the join at the opening   to join them. Anyone there on the day should contact Celia Prichard at Resthaven on [email protected].

The second 50th anniversary celebration will be a Gala Evening and Charity Auction on November 26, at the Don Rowlands Centre at Lake Karāpiro.  That event will be open to the public with proceeds from the event going towards a new community playground and exercise area.