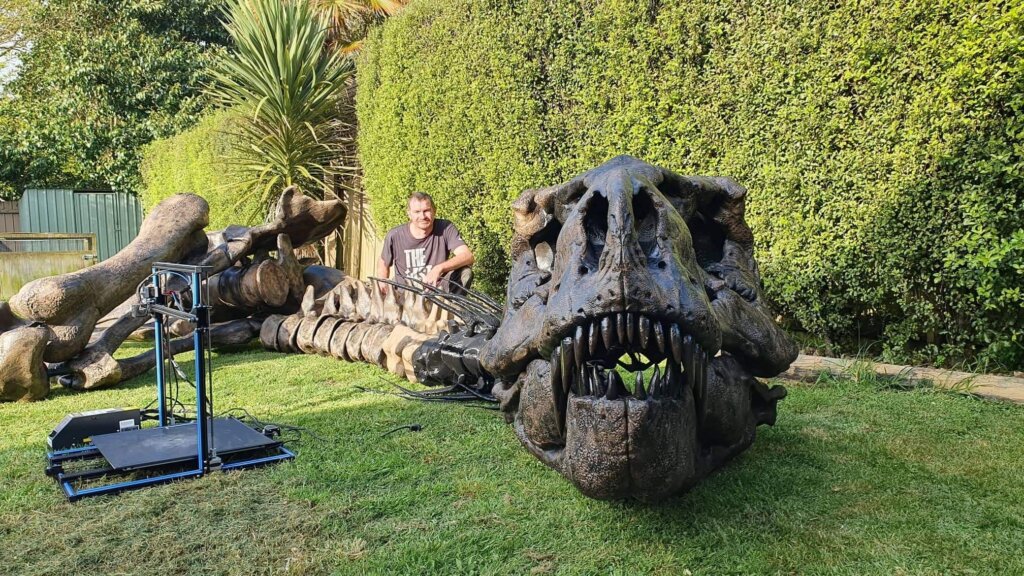 Simon Clark with his under construction dinosaur.

When Simon Clark decided work was no longer enjoyable because the company was getting too big, he decided to call it quits and follow his dream.

The now 42-year-old with a passion for virtual reality started virtual sculpting and using a 3-D printer.

Fast forward a few years and “too big” isn’t part of his vocabulary.

Clark’s lounge boasts a full scale raptor – and outside he is working on what will be a four metre tall skeleton of Tyrannosaurus Rex.

This is the second he has built – the first developed some scale issues, but he was still able to find a buyer for it.

The skull of his current model will be on show at Auckland’s Museum of Transport and Technology – Motat – next week. It comprises 46 pieces and weighs 100kg.

A Givealittle page has helped fund the project. When it’s finished Clark says if he sells it he will refund the donations and start another project.

“I want the public to set it.”

It’s difficult not to think there will be organisations interested in commissioning him to create the skeletons of the likes of the Haast eagle and moa.

And for someone with a keen passion for New Zealand Wildlife that would be a welcome task.

Clark was born in the Bay of Islands, and moved to Cambridge after he and his Wellington based wife Sarah married 17 years ago.

He has always had an interest in computer games, flying and simulation – so when virtual reality hit the market and he put on his first headset VR goggles it was “mind-blowing’.

Today he is known online by the name Topgunsi (Top Gun, favourite move, si for Simon) and his virtual reality world has extended to creating flora and fauna for a virtual insect museum. He even walks you through the museum discussing the insects and how they were created.

The project has had the added benefit of removing his fear of some insects.

His 3-D models are built with a cornstarch based product he imports from China.

“So its not burning fossil fuel – the product won’t last in strong sunlight, but I coat it with epoxy.”

What is YT Rex worth? That’s a good question, but the printer time alone is 6500 hours –“and I’ve lost rack of how many hours I have put into it”.

Clark drops into the conversation that he also has a full scale aircraft in his garage. It’s a two seater and will be taking to the skies.

But just as this fantastic story seems set to take on an unbelievable angle, he points out this is a kit sit – not a printed version. 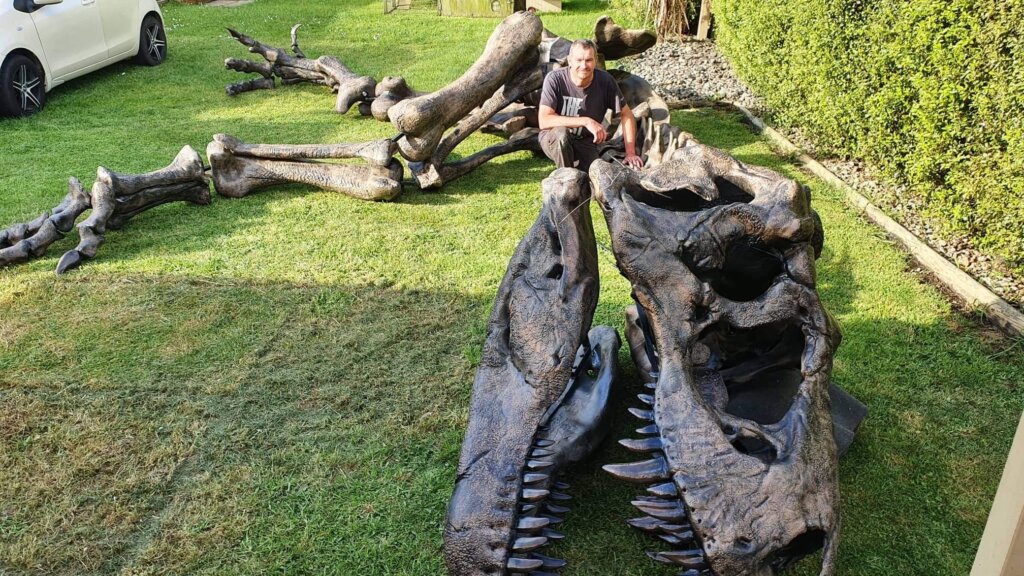