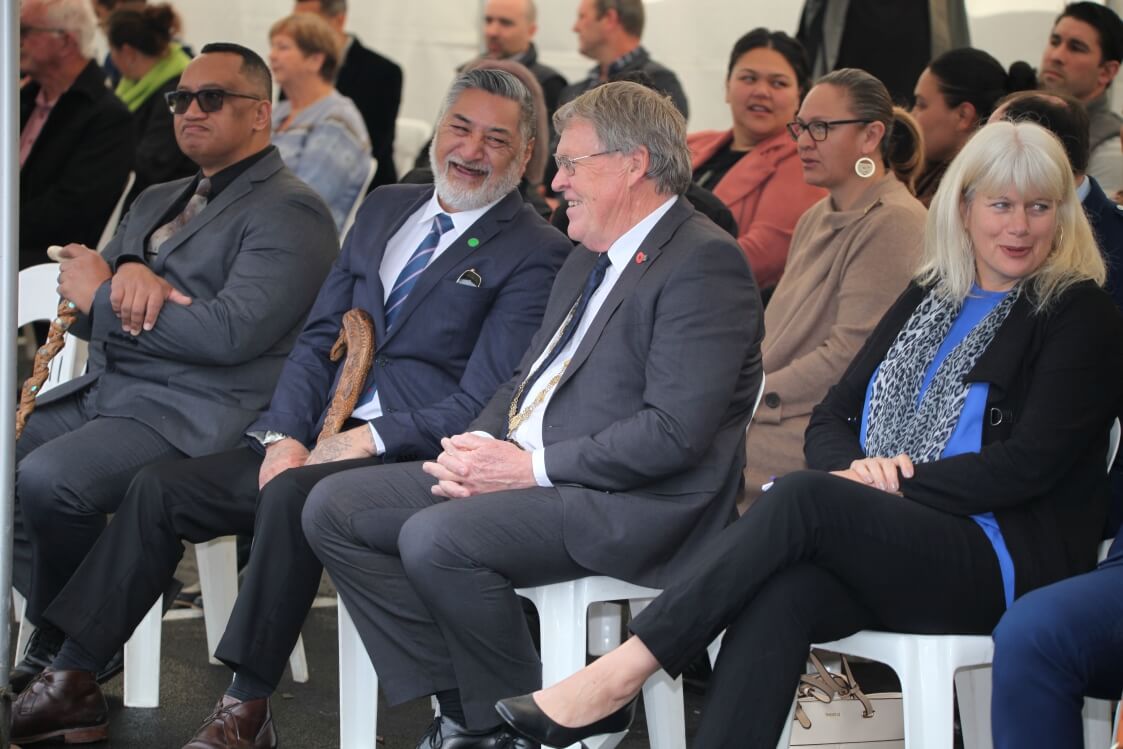 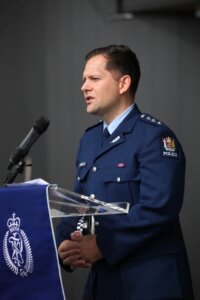 “And we couldn’t be prouder as a community.”

Waikato West Area Commander Inspector Will Loughrin opened the ceremony, held under a white marquee at the back of the building, at 10am.

“It’s great to see a few former area commanders and staff that have previously worked at the Cambridge police station here today,” he said.

“I also want to acknowledge the whanau of police staff who have sadly passed and never got to see this beautiful building.   It’s very special to have you here today representing your loved ones.”

Loughrin thanked kaumatua Sonny Karena and Ngati Haua and Ngati Koroki Kahukura for their ongoing support of Police and the Cambridge community. 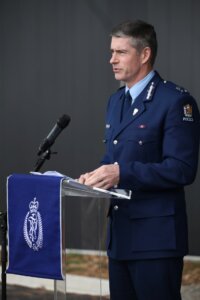 “It’s a whare that will help people to feel safe,” he said.  “It encourages engagement.  It reflects the spirit of mahitanga – working together.  It’s a touchstone for promoting positive change and a community hub for prevention policing and supporting whanau and rangitahi wellbeing.  Its wairua can be felt inside and out.”

He said the Cambridge hub was the first Police and Tainui Group Holdings construction completed since the two organisations signed an agreement on August 6, 2020, formalising their commitment to each other for “stronger communities in the Waikato”.

The building has been operational since it was officially blessed and handed over from Waikato Tainui to Police on August 15.

Coster said the hub was “very much a role model for the way forward”, rich in design features.

Water was viewed as a source of physical and spiritual wellbeing, which was why the building was shaped like a double-hulled waka, “reflecting the joint relationship and the connectivitiy to the awa, past and present”.

The building was positioned so it faced important maunga, and local materials such as Hinuera stone had been included.  Huge emphasis had been placed on sustainability and the environmental impact of the build, which incorporated recycled bricks and rimu from the original police house.

“The design on the southern side of the building signifies that of a taniwha, which represents the life force of mauri and provides guardianship,” he said.  “It is wrapped around the building like a korowai.”

Coster said a garden would be planted in an outdoor courtyard as a memorial space for “staff no longer with us”.

“I know Cambridge police are proud of, and keen to show off, the new base to the public, so planning is underway for an open day in future,” he said.

Rain, which began during the commissioner’s address, was falling heavy as Hinerangi Raumati-Tu’ua was invited to speak.

“Look at what we have achieved in such a short space of time,” the Tainui Group Holdings chair said, acknowledging everyone involved in designing and building the new hub.

“Congratulations.  This is a beautiful whare; a workplace to be proud of and to welcome the community into.” 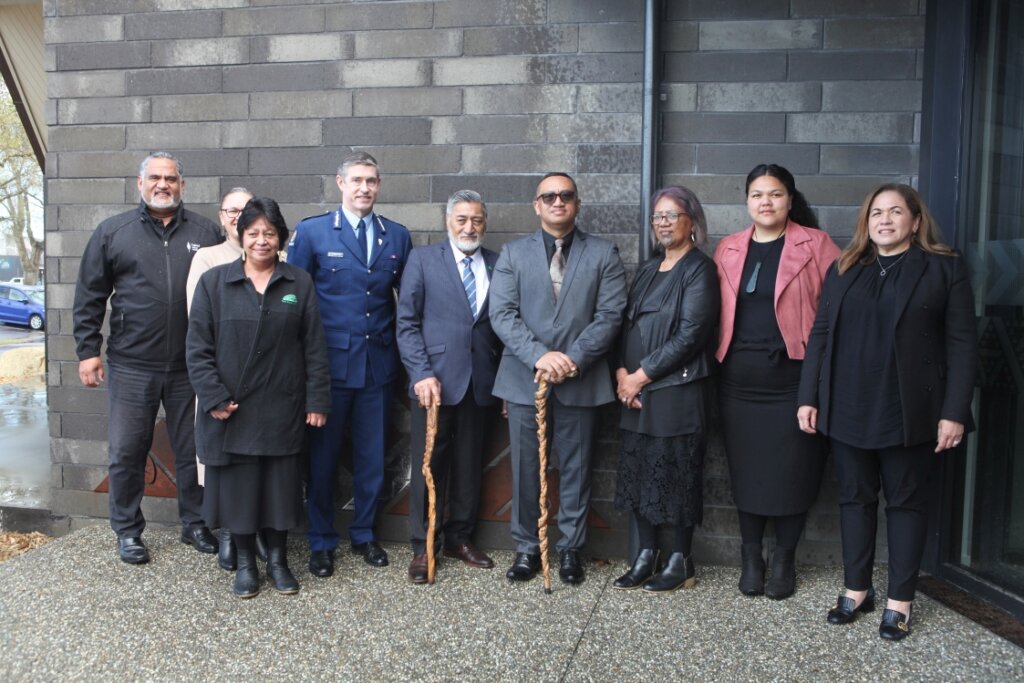 “One thing we are extremely fortunate for in Cambridge is the stability and leadership that the Cambridge police station has given this town,” she said.

“Many faces here I know, but I would be remiss if I didn’t mention our long serving and much loved Gordon Grantham, who led this community for so long – I know some of his family members are here today.”

Commissioner Coster and superintendant Bruce Bird unveiled the station plaque and guests then moved to the front of the station to watch Coster cut a white ribbon stretched across the front door with Tainui delegation leader Hone Thompson – Tumuaki o te Kiingitanga – at his side.

Guests enjoyed kai under the marquee and were invited to tour the new station.

Key features of the new hub include a whānau room, an open plan constable’s room with hot desk capacity, break out rooms, a tactical asset room, and a wellness room.

There are 15 staff based at the hub and the front counter is open from 8am-4pm weekdays. 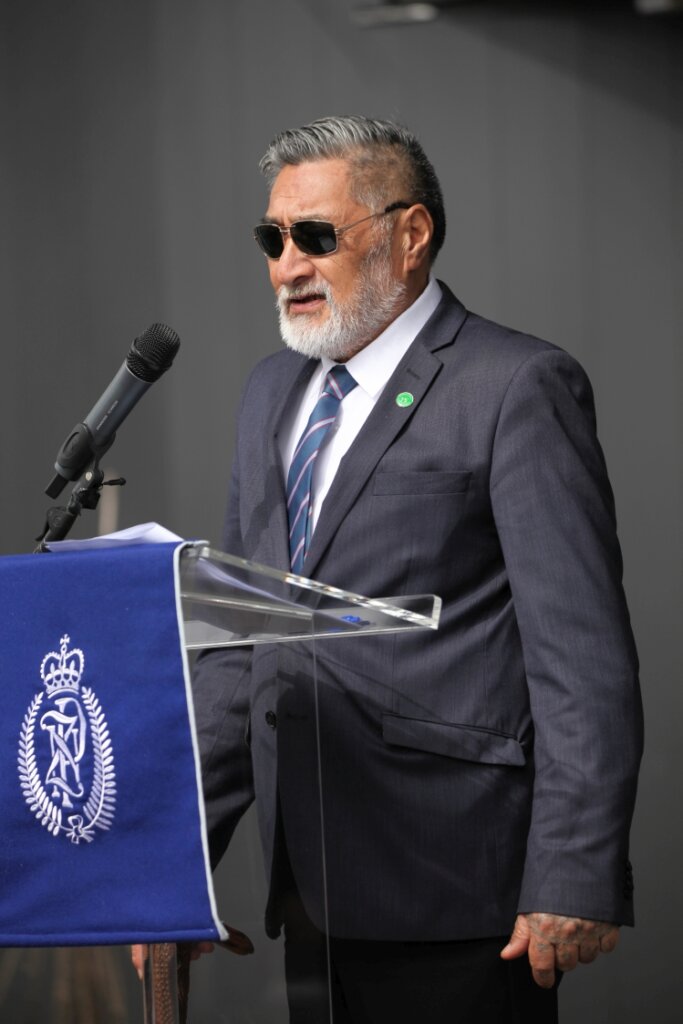 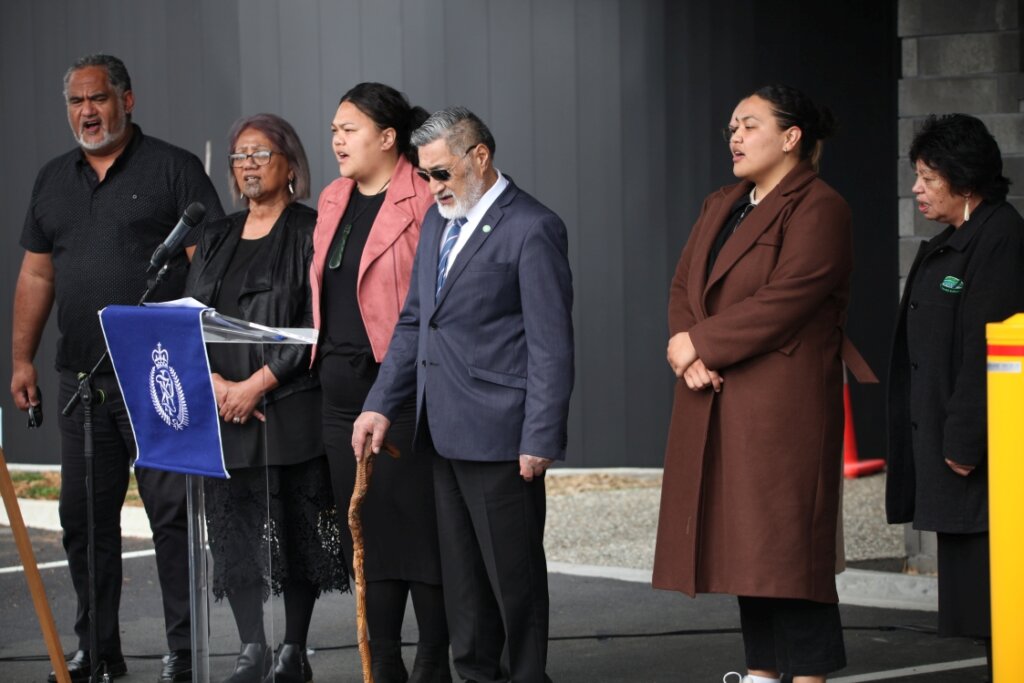 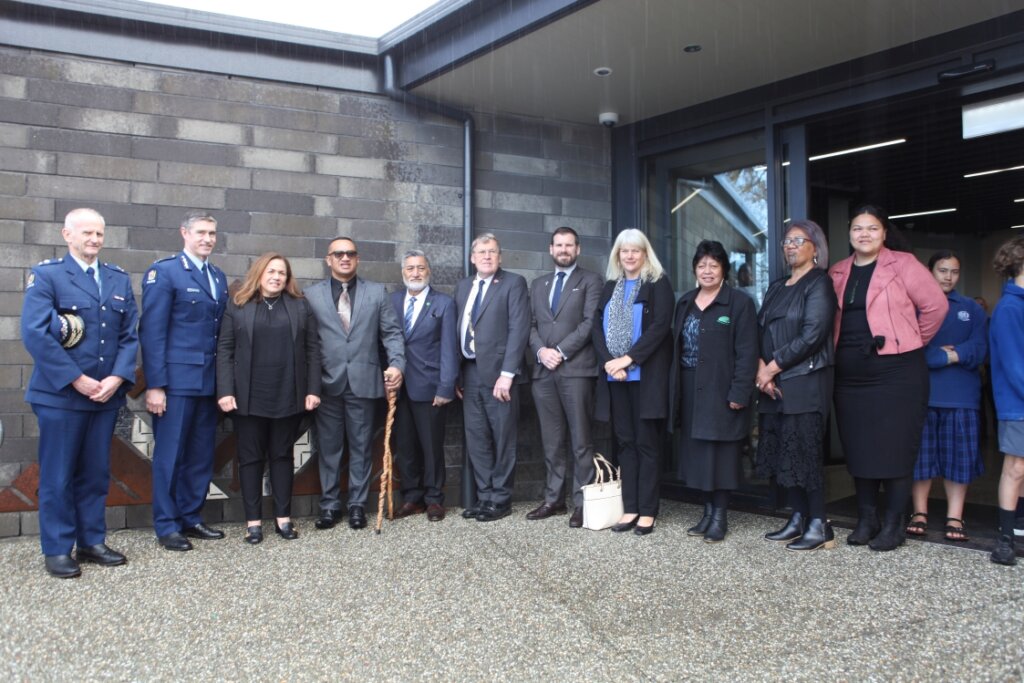 Members of the official party gather at the front of the new police station following the ribbon cutting ceremony. 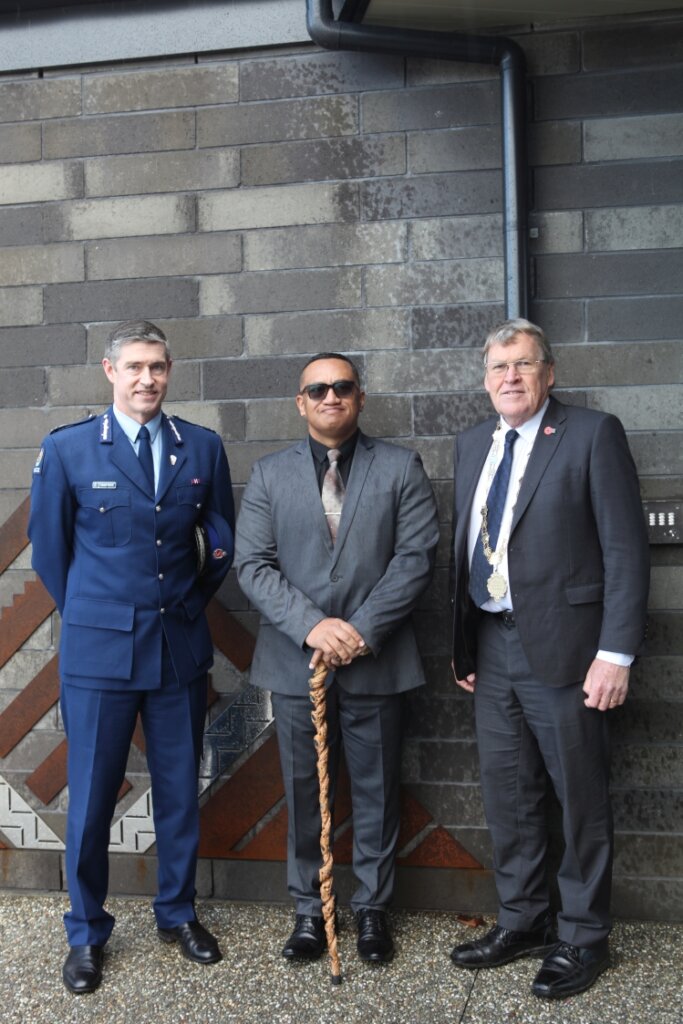 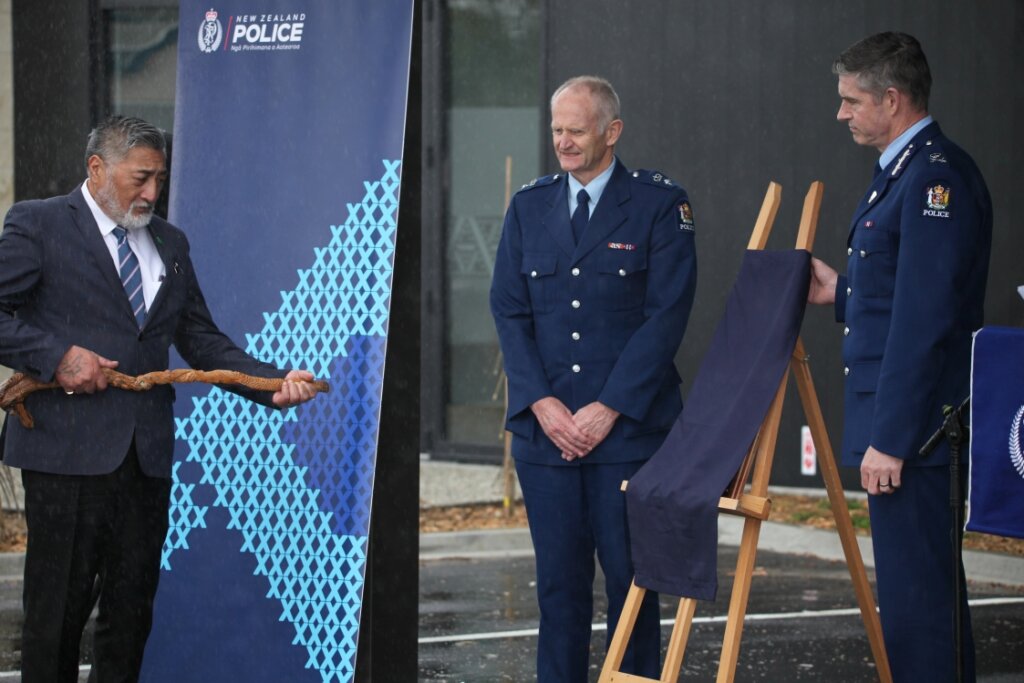 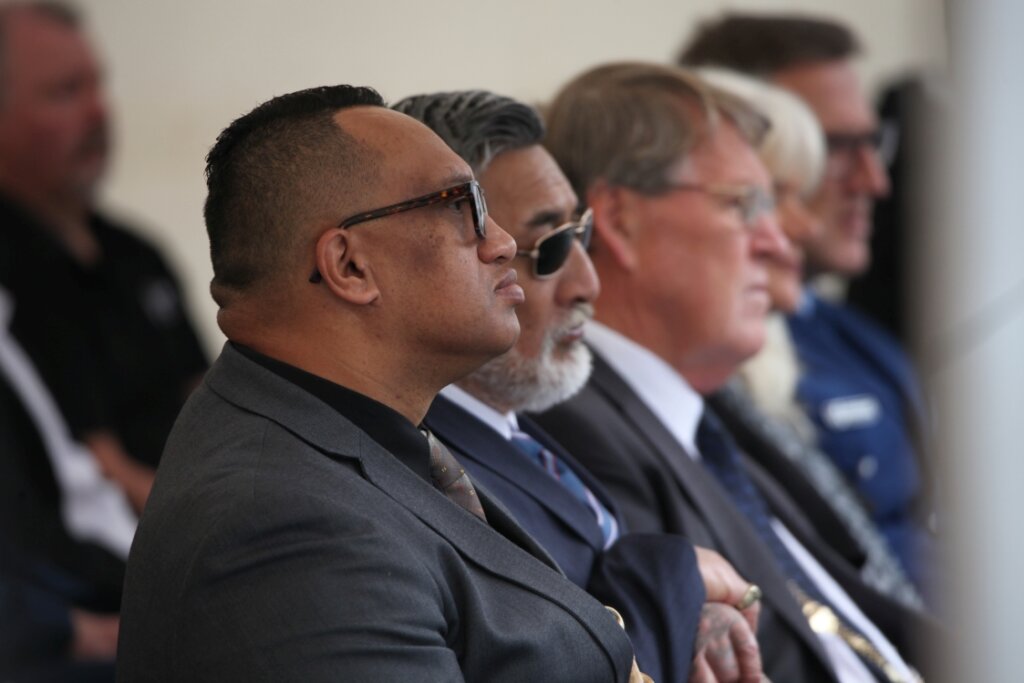 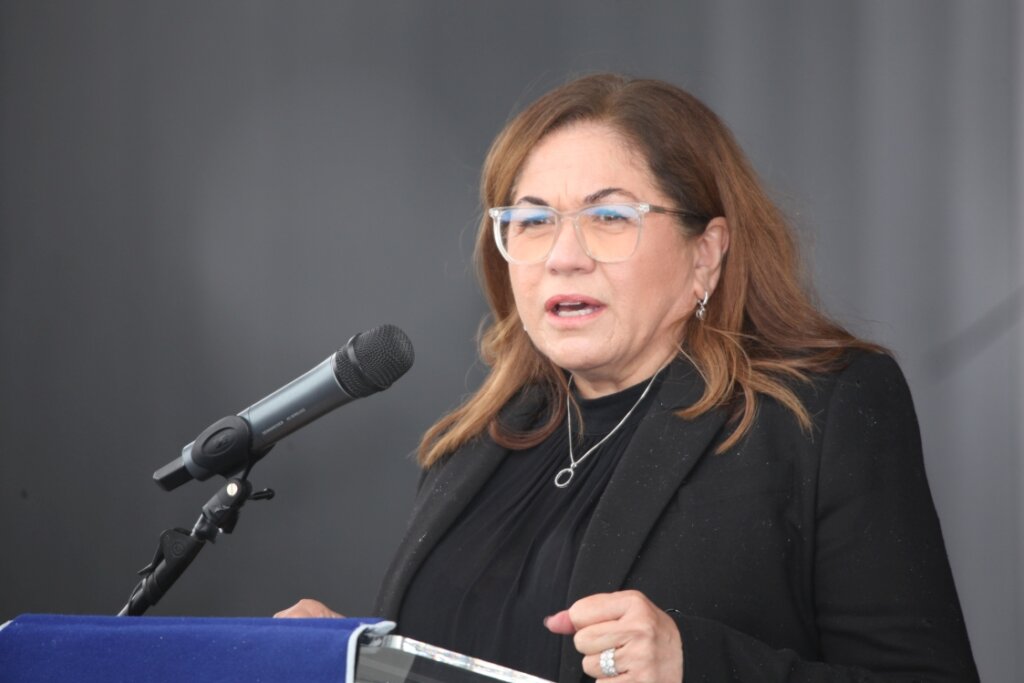 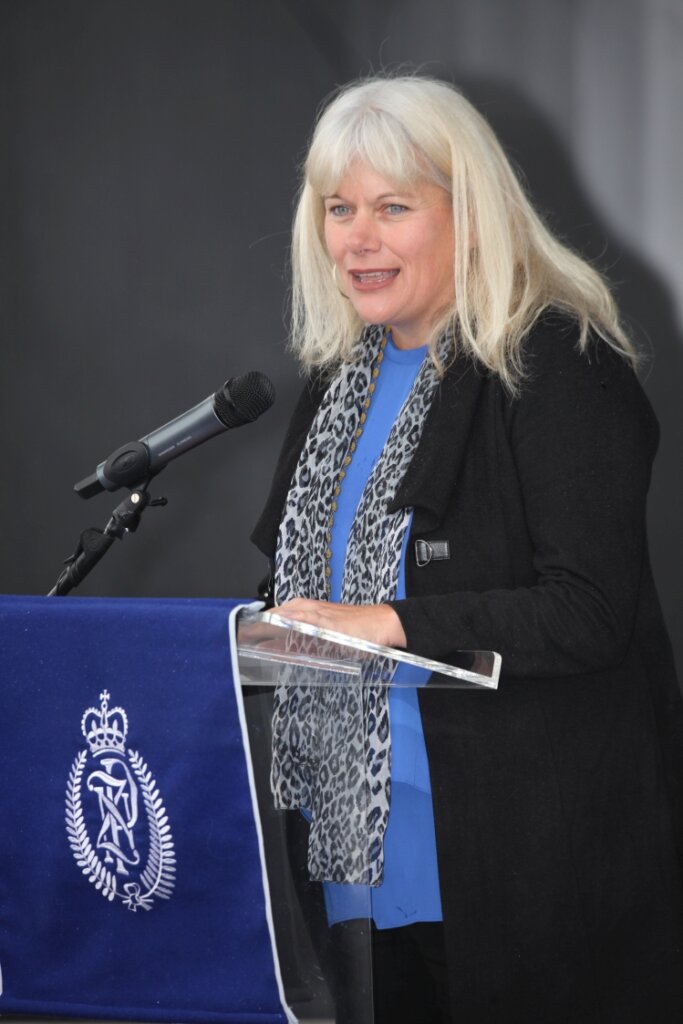 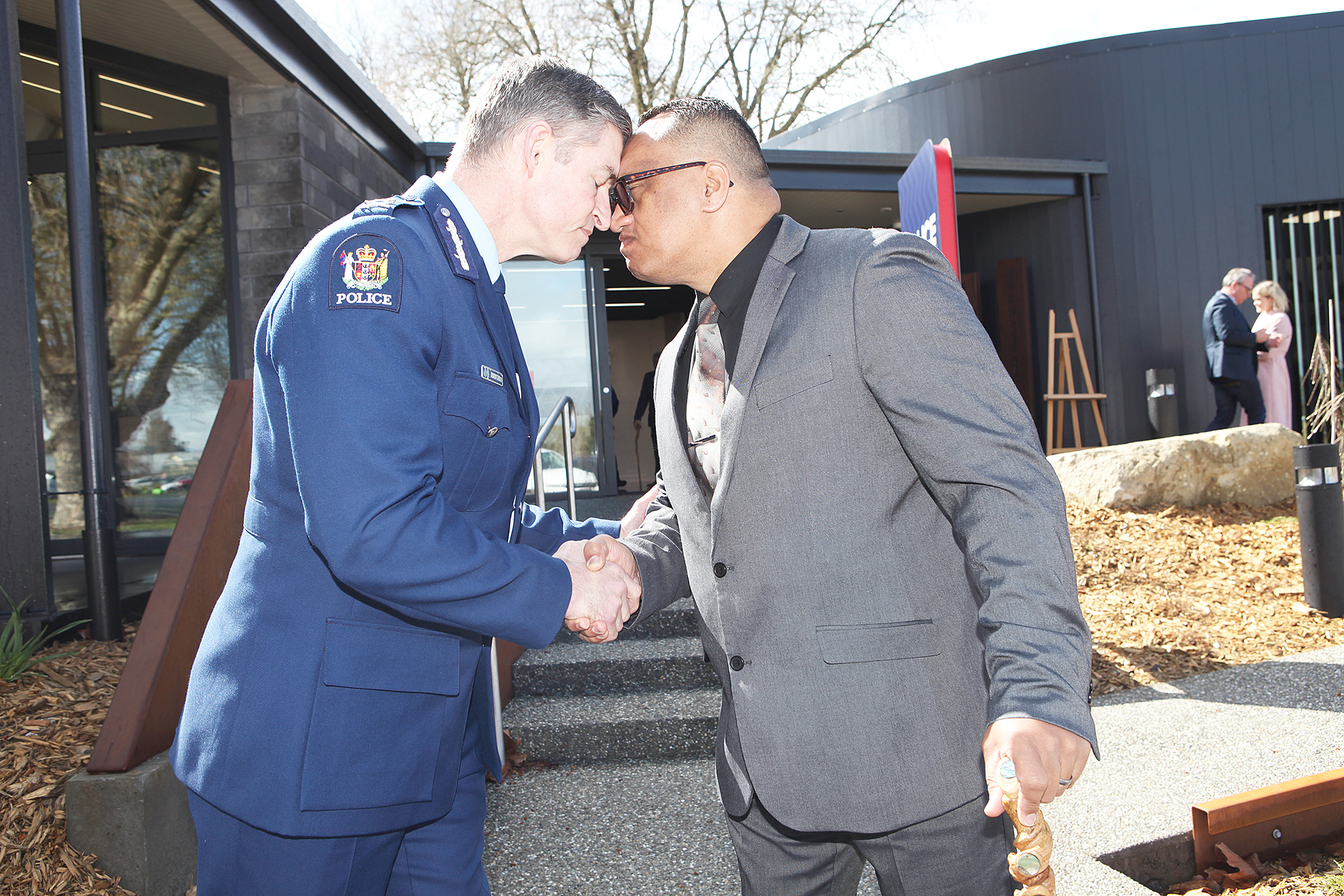 The new base is the first to be developed under the signed partnership agreement between Tainui Group Holdings (TGH) and NZ Police to support the build of modern, sustainable, community-minded Police facilities across the Waikato.

Commissioner Coster says the new base moves away from the traditional look and feel of Police Stations.

“The centre includes the concepts of manaakitanga, haumarutanga, hāpori providing services to the community and enabling public safety – a hub that welcomes the community in, and a building that is tailored to the unique characteristics of the community it serves,” says Mr Coster.

“It incorporates many elements reflecting the local environment and community, including visual elements of significance to Waikato-Tainui and use of the region’s Hinuera stonework.”

“In this case by partnering with local iwi we acknowledge the significance of the opportunity to operate in this tribal location known as Te Oko Horoi.”

“We hope we have achieved our goal of creating a Police base that is modern, culturally aware, and representative of the local hapū, iwi and community, so we can better support and deliver the service our community expects and deserves and we can continue to focus on building a stronger community together,” says Mr Coster.

“We are very excited to have this new base to police from,” says Waikato West Area Commander Inspector Will Loughrin.

“It provides a more modern-fit-for-purpose and functional Policing space for our staff, while incorporating co-location spaces for community groups and local iwi to help foster relationships.”

Key features of the new hub include a whānau room, an open plan constable’s room with hot desk capacity, break out rooms, a tactical asset room, and a wellness room, which opens out onto a courtyard that also serves as a memorial space for staff who have worked in Cambridge but are no longer with us.

The whole concept of the build was based on a welcoming feeling, says Inspector Loughrin.

“The whanau room provides a collaborative space for engaging and working with community partners to better support youth issues, family harm, mental health and our own staff to respond to the diverse needs of the community.”

As part of the day’s events, Commissioner Coster was invited up to unveil the station’s plaque, followed by a blessing by iwi and a tour of the base

There are 15 staff based at the hub, including PST teams, Road Policing and Prevention staff.

It has been built on the site of the previous Police house, which is centrally located on the corner of Fort and Victoria streets.

“We are within easy access to the main town centre and suburban Cambridge, which gives us the opportunity to connect with the community and quickly respond to incidents,” says Inspector Loughrin.

“This is a welcoming space that our community feels safe coming to, where we can provide a great service to everyone.”

The Cambridge Police base has been accessible and operational since August.

The front counter is open between 8am and 4pm on weekdays, allowing members of the community to report crime or speak directly to a Police staff member if they have any concerns for their safety or need Police support.