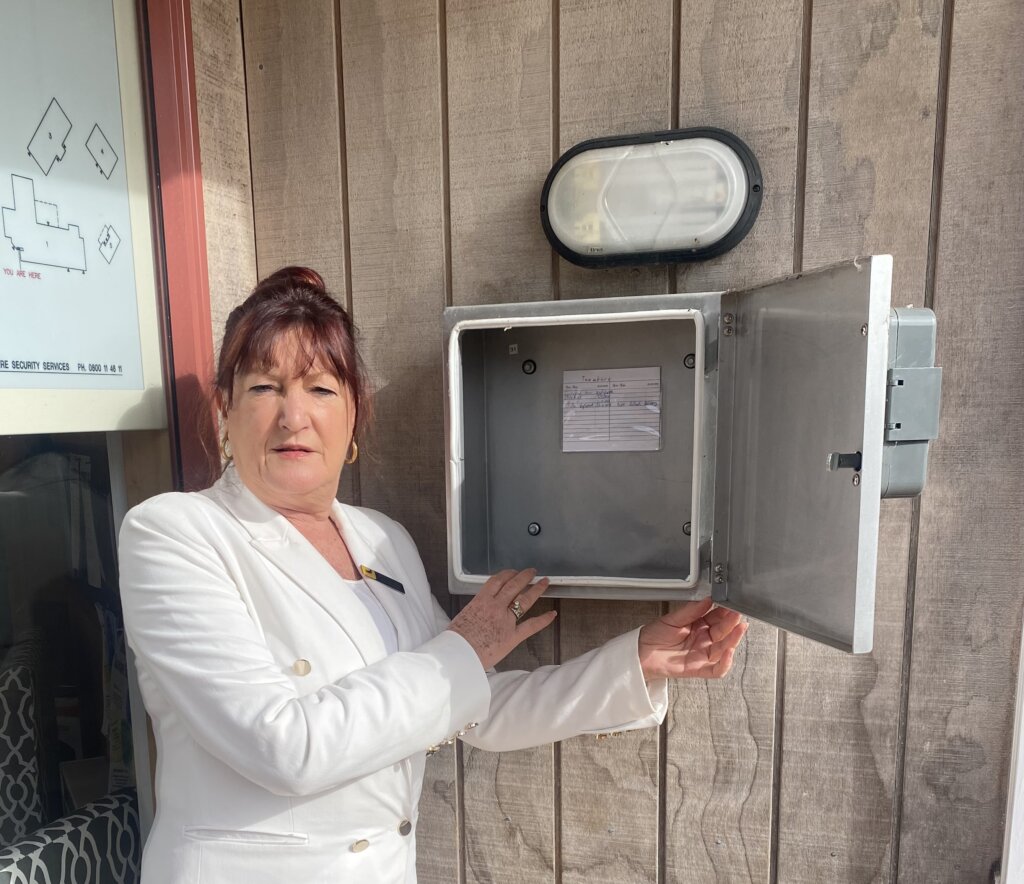 A frustrated Fiona Bradley next to the empty AED box after the defibrillator inside was stolen from Tauwhare School in Scotsman Valley Rd.

Tauwhare School principal Fiona Bradley is ‘gutted and disappointed’ at the theft of an AED (automated external defibrillator) from a secure lockbox attached to an outer school wall.

The box was forced open sometime around the middle of July and the AED inside stolen.  Despite the school alerting the community via social media, it hasn’t been returned and no news of the theft has reached Fiona’s ears.

She reported it to police, who said this week that no information had come forward about the theft.

Fiona believes the defibrillator was stolen on July 13 as its presence had been noted immediately prior to that date.

“I am so gutted and disappointed that someone could do something like this, particularly in a community that is some distance from help if it’s needed,” she said. “For a while I was hoping it had been stolen for a legitimate reason… perhaps someone was desperate to use it.  But then why wouldn’t they return it?  I really want to think the best of people, but given we’ve had no information since, I can only assume the box was jimmied open for the wrong reason.”

She said Tauwhare residents had been ‘thrilled’ when the AED was installed.  “It’s for the children in our playground, for all the people living here. There are a lot of elderly residents around here and it would take well over 20 minutes for us to access help in an emergency.”

The 24/7 AED and electronically-locked box is one of 19 installed at sites around town and the surrounds, supplied through Heartsafe Cambridge.  Details on how to access the defibrillator itself are printed on the outside of the box, while instructions on using it are available on the device itself. Heartsafe chairman/secretary Henry Strong said anyone wanting to open the steel boxes has to call 111 and ask for ‘ambulance’ in order to access a four-digit entry code for the box.  He said no such call had been logged from Tauwhare around that date, suggesting the defibrillator hadn’t been stolen for legitimate reasons.

“The AED is of no use to anyone not wanting to use it in a medical emergency.  It will only deliver a shock to someone whose heart is in defibrillation… it can’t be repurposed for anything else, it couldn’t be on-sold.  This looks to have been theft for the sake of theft.”

Henry said Cambridge was particularly well-covered by AEDs, with no-one in the town and immediate surrounds any further than 1km from an AED.

The defibrillators are funded by the community. “Cambridge is a generous community … we’ve been well-supported.”

Pre-Covid, Henry and others among the nine who run Heartsafe Cambridge volunteered their time to give demonstrations to groups and organisations wanting to ensure they knew how to use an AED in the event of a medical incident.

They’re back to offering the same service now.  Those interested should email HEARTSafeCambridge.