Memorial for a record breaker Family and brigade members escorted Winston Steen on his final memorial ride through town on the iconic engine Flick. Winston ‘Wint’ Steen was as straight up a guy as you could wish to meet.

He was kind, hard-working, deeply competitive, a great listener who remained discreet and a loyal family and community man.   His was a steady, safe hand wherever he applied it and those who spoke at his memorial service last Saturday at the Cambridge Fire Station held him up as an exemplary role model for a life well lived.

Wint’s own life ended last year, on August 24, quietly at home surrounded by family.  He had been quietly battling an illness that for four years saw his wife Yvonne drive him to Waikato Hospital for dialysis three times a week.  While the family managed to hold a small service for him at home, Covid restrictions put a stay on the community farewell Wint deserved.

They were a tight pair, Yvonne and Wint.  Married for 56 years – uncannily the same number as Wint gave to the Cambridge Volunteer Fire Brigade – they made for a strong team.  In the pre-technology era, Yvonne was one of those ‘fire wives’ who every time the alarm sounded in town would set about ringing two other firefighters while Wint raced off to the station.  It was a failsafe networking system of communication.

Wint’s 56 years with the brigade ended up being part of an astounding 127 that the wider Steen family accumulated as firemen.  His father Tom did 40, and his brother Ken completed 31.

Speaking at Saturday’s memorial, chief fire officer Dennis Hunt spoke to that ‘amazing contribution’. “You would be hard-pressed to find a family in New Zealand who have served a community for that length of time, and I doubt if Cambridge will ever beat that record.”

He said there were 72 calls during Wint’s first year with the brigade; today there are around 420 annually.  Wint had been deputy chief fire officer for 18 years. He was Cambridge’s first firefighter to receive a 50-year medal and by the time he left the service, he had responded to 9188 calls.  His ever-present competitive streak saw him win the champion’s cup in the brigade’s annual Town Square competition an astounding 13 times between 1964 and 1989. 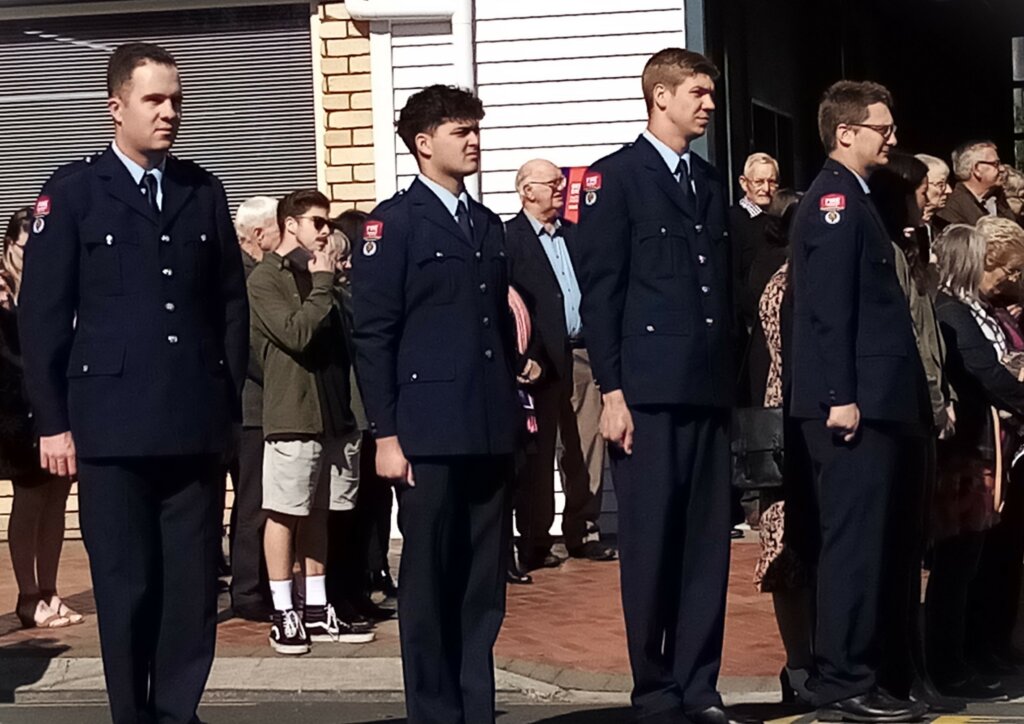 Some of the members of the Cambridge Volunteer Fire Brigade who formed a guard of honour in Duke St.

That competitive spirit also drew comment from Rob Feisst, who worked with Wint for over 30 years and said ‘we can win this’ was Wint’s rallying cry.  They met when Rob was 10 and Wint, who was involved in rowing and rugby, later captained Rob’s rugby team in Cambridge.  “He led by example… he was tough.”

Born at Penmarric in Cambridge, and educated locally and at Hamilton Tech, Wint became an electrician, later joining the company his dad Tom started in their Clare St garage in 1931.  Steen & Morrow became the working part of his life, growing steadily under his leadership until he retired and sold his shares in the business in 2011.

The family grew and thrived in the same part of town.  Wint died at the same property in which he had been raised, albeit in a house he and Yvonne later built.

Wint and Yvonne’s three children and seven grandchildren champion his uncomplaining nature, his steadiness, dependability and honesty.  Wint’s style of competition thrived in their midst, not only in predicting sports scores to win a prize, but also in their annual pumpkin growing contests.

Family, newspapers, quizzes, gardening and sports … he was a man who loved them all.