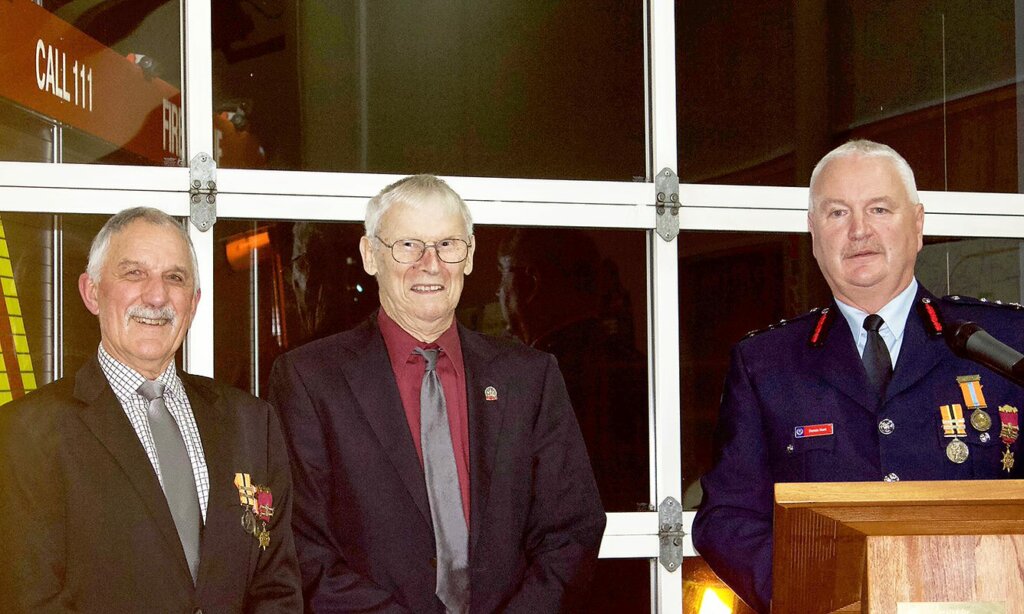 Two firefighters who between them have given 67 years’ service to Cambridge and attended over 14,200 calls and musters have been presented with life membership to the Cambridge Volunteer Fire Brigade.

Don Weinberg and Andrew Goodwin have both retired from the brigade.

They were presented with their awards by life member Keith Goodwin this month – at the first function overseen by new chief fire officer Dennis Hunt.

Those at the event heard that Don, who started with the brigade in September 1990, completed his volunteer service in December 2021 having achieved 32 years’ service and attended 7867 calls and musters.  He started out as a firefighter before being promoted to motorman and taking care of the brigade’s tankers. In 2002 he was promoted to station officer, then to senior station officer in July 2019.

During his service he ran the annual Christmas fundraising raffle, operated an earlier water delivery service which helped generate income in its day, and looked after the brigade’s museum assets.

Andrew, known as Droid, started with the brigade in December 1986 and retired at the end of February this year. He has attended 6400 calls and musters during his 35 years’ service.  His father Keith Goodwin was involved with the brigade in his day and was central to his son’s decision to join.  Andrew also started as a firefighter before progressing to motorman.

As a mechanic, he looked after the maintenance of the fleet as well and spent many hours on the restoration of the iconic engine, Flick. Over the years, he helped with driver training and the annual competition on the town square, winning the top trophy in that event for 11 of the past 19 years.

Andrew’s son Hayden was recently accepted into the brigade, continuing the family connection.

The evening ended with a surprise for Hunt, who was himself presented with life membership by long standing member Richard Gerrand on behalf of the brigade.

Deputy chief fire officer Glenn Philip said life memberships were generally presented in Cambridge only to long standing members when they leave or retire from the brigade.

“However, after the passing of ex-chief Don Gerrand in May, the members voted to make an exception for our new chief who has been our rock over the last few months, and who will now be taking our brigade into the future,” he said. “CFO Hunt has completed 34 years in the Cambridge

Brigade and has been an exemplary member.”