Dewey Finn is a wannabe rock star who was kicked out of his band and can’t make his rent payments so he takes up his friend’s job by posing as a substitute teacher at the prestigious Horace Green prep school.

That’s the premise for School of Rock, based on the iconic, hit movie starring Jack Black. The production opened at St Peter’s School, Cambridge last night and finishes next Thursday (August 4).

After overhearing his class rehearsing a Mozart classic, he realises they have musical ability and with no qualifications to teach he instead falls back on the only thing he knows, ROCK!

Dewey turns their school days into lessons on rock history and appreciation, eventually converting the class of straight-A pupils into a guitar-shredding, bass-slapping, mind-blowing rock band that competes at the Battle of the Bands without their parents and the school’s principal finding out.

The whole show belongs to Dewey, played by Year 13 student Archie Hazlett, who competently captures the high energy charisma of this loveable wild, lazy, and rebellious rogue. Barely leaving the stage Hazlett belts out crowd pleasers “You’re in the Band ” and “Stick It to the Man ” supported by the talented class of students. Special mentions must go to Emily Mckean and Elijah Morton-Jones, for their fantastic portrayals as Summer Hathaway and Freddy Hamilton.

Another notable mention goes to Jade Newton whose characterisation of principal Rosalie Mullins adeptly captured the mannerisms of a strict uptight principal with a caring nature. Her rendition of Andrew Lloyd Webber’s “Where Did the Rock Go”? where she lets her hair down (literally) to reveal her true self showed maturity and control. 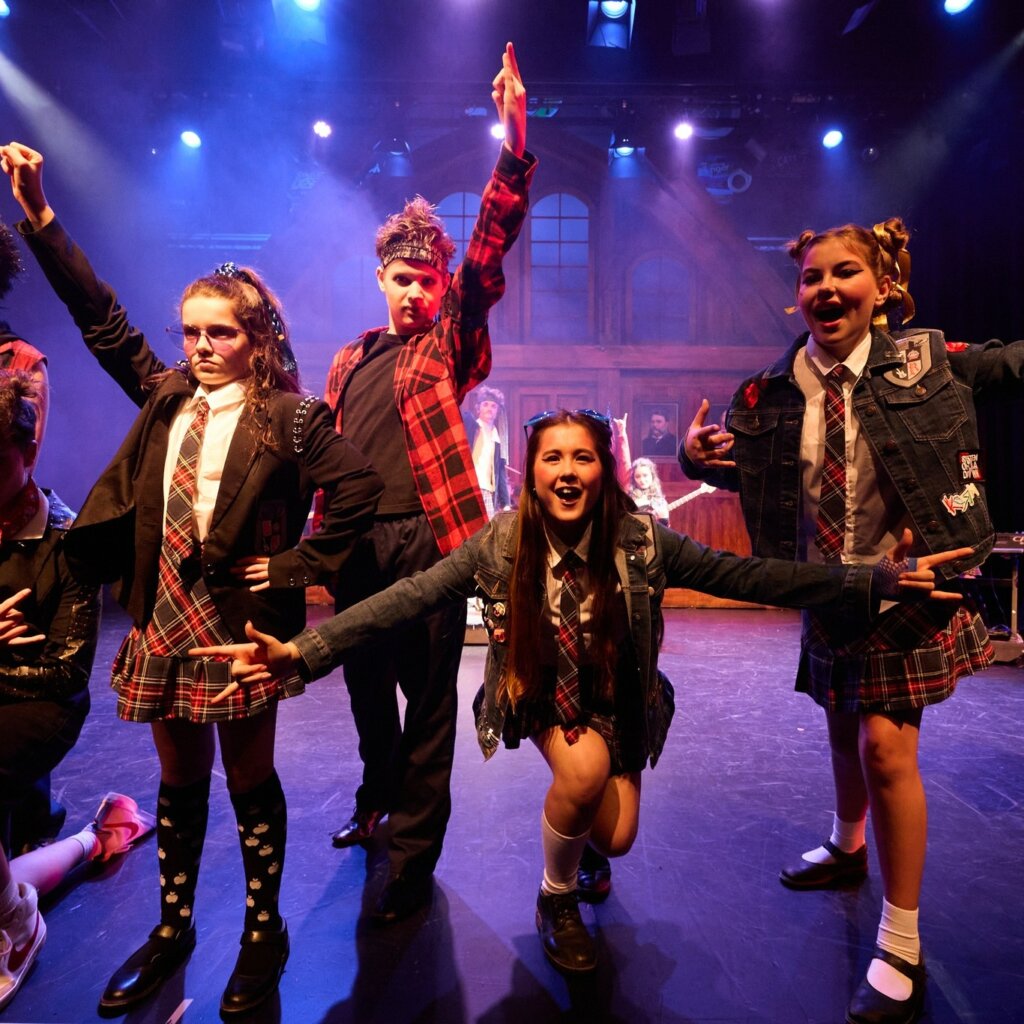 This being David Sidwell’s 17th show as director for St Peter’s School, he has lived up to the famous show business phrase “the show must go on” getting the best out of this young cast despite the year of disruptions which saw rehearsal restrictions with masks, distancing, and outdoor settings, changes of cast, and a postponed season.

The staging, modelled on the St Peter’s Dining Hall by Christchurch based production and set designer John Harding is world class for a school show. While its function is simple and effective, mostly keeping to the confines of the classroom, the elaborate full scale set emulates traditional private school architecture.

This high energy production culminates with a final crowd-rousing performance at the battle of the bands that makes you feel part of a real life rock concert. The mosh pit styled choreography by Hannah McFarlane, ostentatious lighting design by ACLX – Aaron Chesham, modern rock take on a traditional school uniform by costume designer Renate O’Sullivan and ‘rocking’ band led by Sam Cleaver give the full barbaric experience.

Being a teacher myself I know the value of relationships and igniting a passion in students.

Seeing the musical and dramatic talent come alive on stage, led by the talented creative team who have clearly fuelled their love of performance and capably showcased the abilities of these young people, is a credit to the St Peter’s team!