Kym Kearns at 20 plus years is Cambridge’s longest serving librarian. The former world champion inline and roller hockey player is a member of the Duke Street walk of fame and a breeder of trotting horses. Photo: Mary Anne Gill.

Cambridge Library turned 150 last week but staff were too busy to make a fuss – other than cut a birthday cake – as they were issuing books and signing up new members.

The library has never been busier, library supervisor Rachel Newnes said, and the books stored under the shelves and out the back in the work room highlights the need for more space.

There was a failed bid to rehouse the library in the old Bunnings building earlier this year and Waipā District Council is not ruling out grabbing extra space from within the library’s existing facility in Wilson Street which it shares with council staff.

Acting chief executive Ken Morris said because of flexible working from home arrangements in response to the pandemic, there are not as many staff in the council’s two offices in Te Awamutu and Cambridge.

“The issue of staff accommodation will be under review over coming months,” he said.

“Three Waters reform could have a significant impact on how many staff we need to house in our own buildings.”

The library moved into the council’s Cambridge service centre in 1998. It is its fifth home since it opened on July 9, 1872 with 30 members and a couple of hundred book titles in the Cambridge Primary School.

Today it has nearly 21,000 members – 1000 new ones in the last year – and issues more than 310,000 books, DVDs and jigsaw puzzles annually, nearly twice as much as the other Waipā library in Te Awamutu and up five percent in a Covid affected year.

The library is single-storey, but the rest of the service centre is double storey – so any expansion into office space would have to consider floor loading issues, given the weight of books, said Morris.

“So, there are quite a few things in the mix.”

The library has a history of outgrowing itself – moving from the primary school to Victoria Street and then into the new Town Hall in 1909.

Cambridge was one of 18 local New Zealand councils to get money from Scottish-born American philanthropist Andrew Carnegie for a ‘free library’. He advanced £1000 for the Town Hall’s proposed library wing in return for a pledge that all persons over 14 years of age residing in the borough should be able to take out one book free a week, and those paying a subscription could borrow a further two books. The Carnegie Free Public Library stayed in the Town Hall until 1977 when it moved to its fourth home back in Victoria Street to new premises behind where Robert Harris Café is now.

It then moved into the council’s newly-built service centre on July 7, 1998 into an 850 square metre space. On current projections, the library needs 2500 square metres – 900 more than Te Awamutu has.

Doom and gloom merchants predicted the demise of libraries post Covid, but the opposite is the case.

Adult issues are well up while e-Books and e-Audios grew in popularity during the pandemic.

Librarians also took to the road issuing books in places like rest homes and retirement villages where residents were unable to get out. They will continue that mobile service using Covid recovery funds until December.

Cambridge Community Board chair Sue Milner, an ardent fan of libraries, congratulated the library on its sesquicentennial.

“A library is more than books, it is people and it is for everyone,” she said. “Cambridge is so fortunate to have such a wonderful library with terrific staff.”

As part of the low key celebrations, a wine and cheese evening will be held next week for invited guests while residents can write in a commemorative book to record their thoughts on Cambridge Library.

Plenty have already including young Knox who took up a whole page to say: “Thanks for library book.”

Cambridge Library celebrated its sesquicentennial – 150 years of service to the Cambridge and Waipā community on July 9 opening its doors in 1872 in a building that was part of Cambridge Primary School. 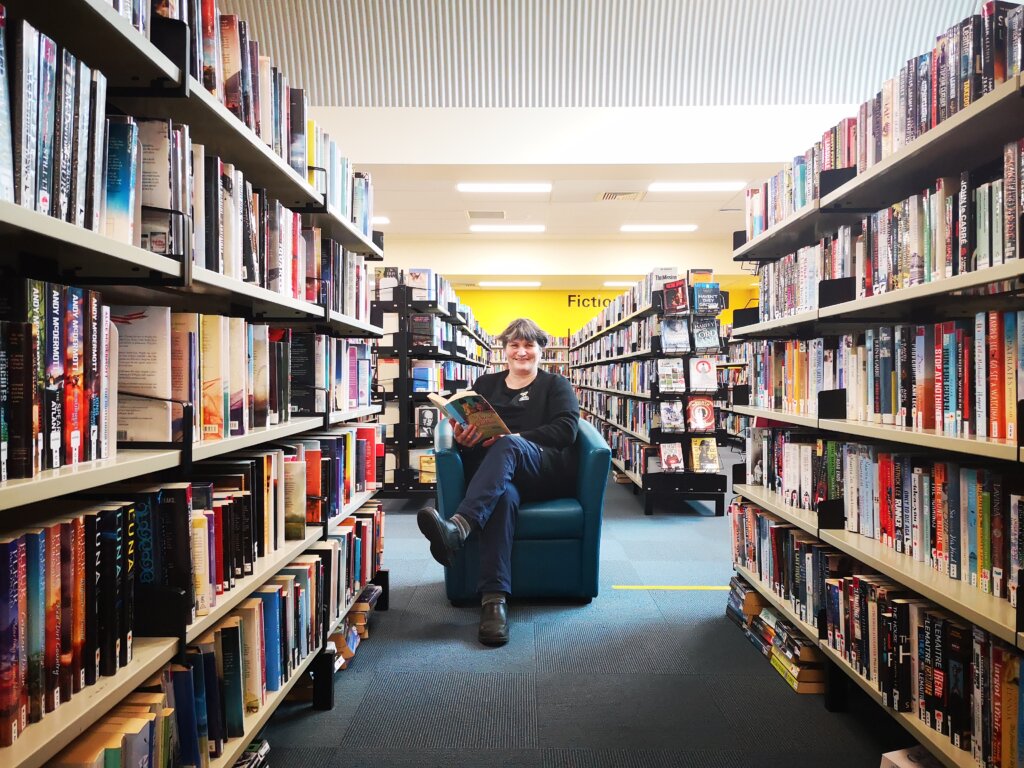