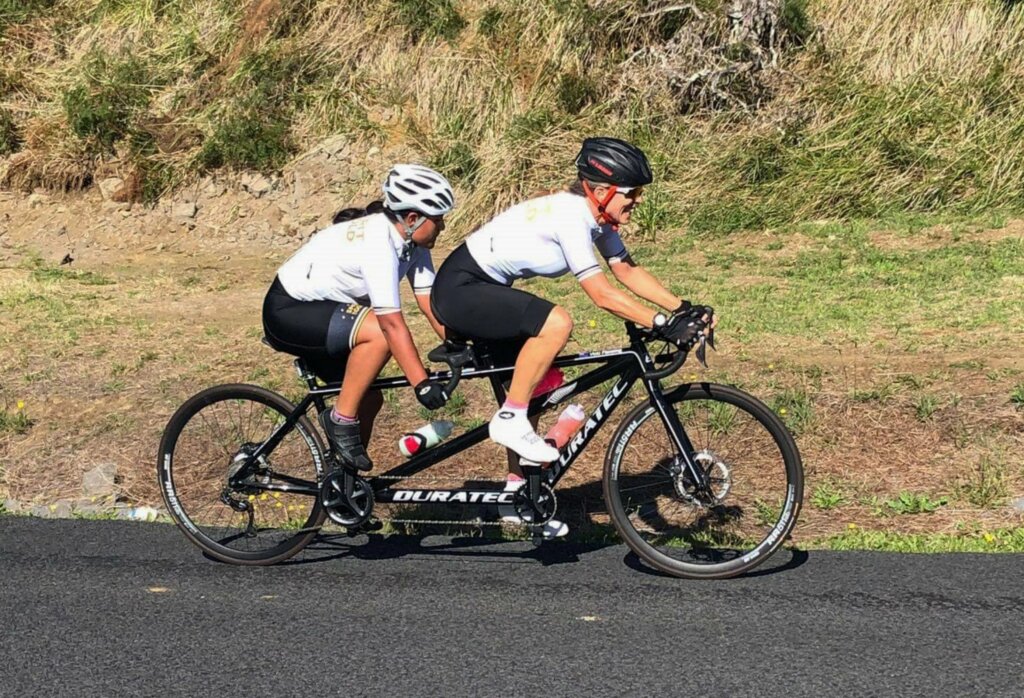 Powering to the finish line in Hokitika are Unity Collins (rear) and Vicki Fleming.

The gutsy 27-year-old, who rides with the Morrinsville Wheelers Cycling Club, took gold in the BVI (tandem) road race. Riding as her pilot was Vicki Fleming, a Cambridge-based coach and rider with whom she has paired since March 2021.

Unity, who is from Te Awamutu, pulled out all stops in Hokitika.  She also took bronze in her time trial event, making for a successful weekend that has inspired her to push further still.

“I am very keen to take it further.  I want to take the next step up… it might mean riding offshore.  Vicki knows me well, she knows what I’m capable of. She’ll look at the schedule and let me know what goal I need to be aiming for,” Unity said, during a break in her regular dog-walking activities in Te Awamutu.

Vicki said Unity’s level of commitment to training and her work ethic made her a delight to work with.  “We know each other really well. Unity was a great swimmer before she decided to take up riding. In the three years since she has shown herself to be very capable. The gains she has made already are huge.

“We’ll look at doing some able-bodied cycling over the winter and there are more time trials coming, but she needs more exposure to move her from her current position as a community rider to the development programme – ideally, she needs to go offshore for that.”

Unity trains with Vicki at the Avantidrome in Cambridge and does some road training with her dad, Ross Collins, who has been with her every step of the way.  The dad and daughter duo have done a lot together over the past few years, including the Tough Guy and Gal Challenge.   Unity has also competed at various other events, and works with a personal trainer who helps maintain and build strength in her legs.

She said: “Vicki trains me quite hard … but she has a way about her that means I get the best out of it.”

When not training or competing, Unity is walking her clients’ dogs, going to guitar or ukulele lessons, or strumming the latter at club evenings both in Te Awamutu and Cambridge. A victorious Unity Collins and Vicki Fleming in the number one slot after winning gold in Hokitika.