‘Toxic’ tree for the chop The Juglans Nigra black walnut tree at the end of Le Quesnoy Place has come down to make way for a new house. 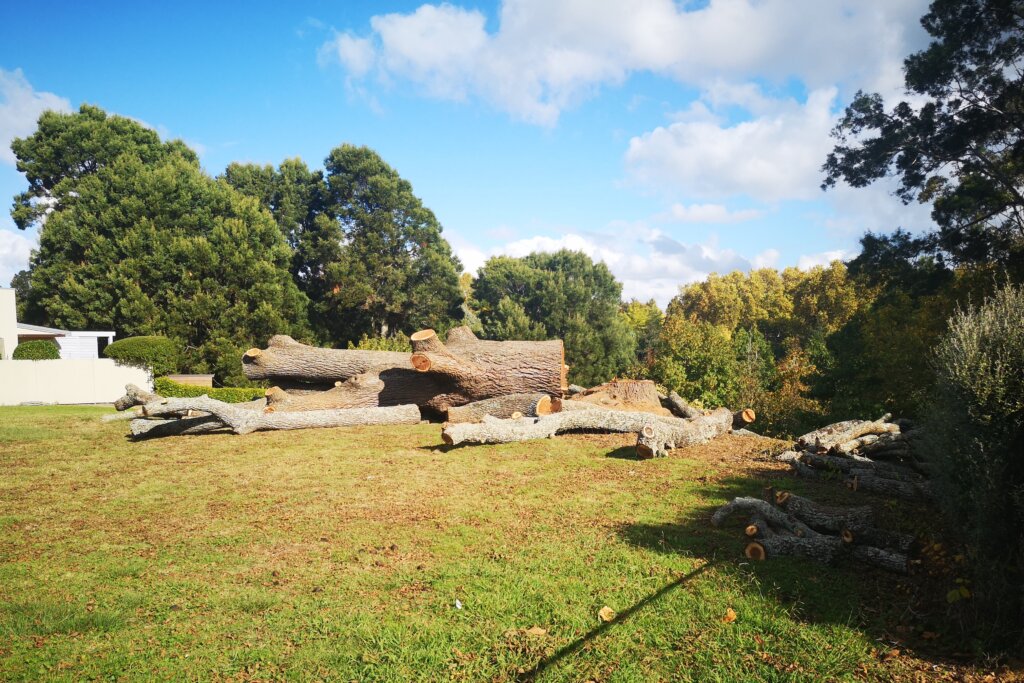 The giant walnut tree has been felled.

A protected black walnut tree at the end of Le Quesnoy Place in Cambridge has been felled to make way for the latest home in a European-styled housing enclave.

Cambridge Tree Trust chair John Moodie says he is “extremely disappointed” Waipā council did not let the trust know it was considering the tree’s future on April 20. The council says they told trust secretary Connie Scholten about the plans.

“They could have kept us in the loop, they know we’re interested,” Moodie said, a reference to the group’s contributions to the protected tree register consultations three years ago.

Then the Standard Tree Evaluation Method (Stem) score for the tree was downgraded from 144 points to 138 points. That meant the council was under no obligation to let the public know it was considering the tree’s future because under the District Plan, only trees above 138 points require public notification.

Applicants Fred and Pamela Barrett applied for consent to fell the tree earlier this year. Rob van Voorthuysen, an independent commissioner with more than 40 years’ environmental and resource management experience, considered the application.

Communications consultant Victoria Wightman said the tree was unique to other protected trees in the district due to its allelopathy (toxicity) placement on a vacant residential lot and the dangers it presented to people on the lot and adjoining properties.

“The application to fell the tree was supported by an arborist report submitted by the applicant (an arborist outside of council), a building report, surveying plans, a design statement from an architect and a report from Agsafe,” she said.

Moodie said the Tree Trust, which works closely with the council on a voluntary basis on several projects around Cambridge, had fought to save the tree before. The council says the walnuts are very large (size of a cricket ball) and heavy and pose a significant health and safety risk to neighbours and residents of the site itself.

Three years ago, Craig Webb a consultant arborist, produced a report to the council when it was considering changes to its Protected Trees plan and the owners of the section wanted the black walnut tree’s Stem score downgraded so they could build a house.

He said the black walnut tree posed no threat to human, animal, or plant life.

“It is true that black walnut trees have toxic compounds that can kill other plants or prevent many from growing, however in this tree’s current setting the harm done is not a significant factor.

“The toxic compounds’ hazard to humans and animals is overstated in the submission and not supported by fact. Black walnut provides an edible tree-nut crop and the nuts have been found to be toxic to dogs only when mouldy.”

It was the tree’s “nuisance” value which contributed to its lower score of 144, he said.

“It is acknowledged that the presence of a protected tree could have significant implications for future land development on this property, and that this may require creative planning and architecture.”

Webb said then the tree was unlikely to be down-graded to an unprotected status.

Since then, the section has been sold and it was the new owners who applied to fell the tree.

Moodie said the wood from the tree would be durable and lovely. He has an interest in wood turning and said walnut made beautiful furniture and in past decades had been used on wooden dashboards of cars like Rolls Royces and Bentleys.

“That tree has a beautiful trunk. I just hope they see the value in the wood,” said Moodie.