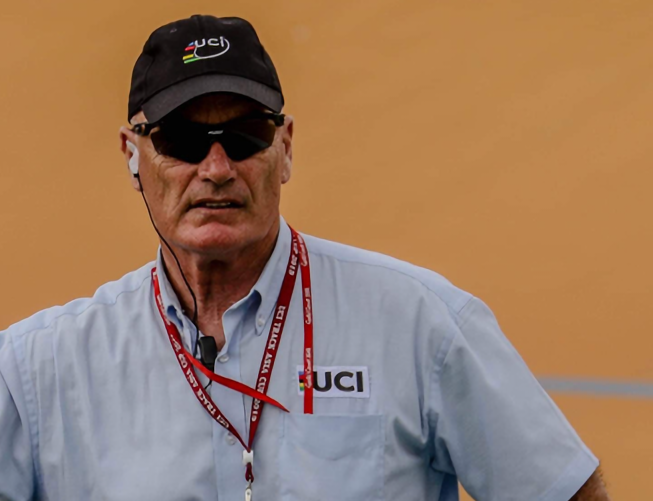 Cambridge High School’s deputy principal John McDonnell will don his international cycling commissaire alter-ego yet again this July as he heads to Birmingham to officiate in the 2022 Commonwealth Games.

The Games, which open on July 28, will be the deputy principal’s seventh as a commissaire – the cycling world’s word for “referee”.

This year, he’ll be officiating across all of the track, road and mountain biking disciplines.

For McDonnell, who has an NZ Order of Merit and approximately 170 international events as both a commissaire and a doping inspector under his belt, the globe-trotting double-life comes naturally.

“You’d get the call, Friday night, to fly to the race in Japan,” he recalled. “You’d fly over, get the samples, take them to the lab in Tokyo, and then you’re back on the plane to New Zealand, and back at work on Monday.”

It all started back in 1988, when McDonnell – who had enjoyed cycling as well as rugby at high school – started ‘commissairing’ in local and national events in New Zealand.

“When Cycling New Zealand put the application out, they had seven applicants to go, and they only had one spot,” McDonnell recalled.

The application process was ranked, and McDonnell, being only a young commissaire, was number seven on the list.

“The others all had heaps of years of experience,” McDonnell said.

And then, of course, the Gulf War broke out. A week before the course in Cairo, the other six applicants had pulled the pin.

“NZ cycling still had the one spot, and they said ‘Do you want to go?’ And I took the opportunity and here I am,” McDonnell explained.

Nowadays, there are two official languages of cycling: English and French.

More often than not, however, McDonnell will be speaking a different kind of international language when he’s commissaring.

“The international language I have is that I have a batton – like a table tennis bat, with a big hole in the middle, red on one side and green on the other. When there are cars coming up – I hold it up and the peloton stops, and off you go,” he recalled with a chuckle.

In his 30-odd years of ‘commissairing’, McDonnell has noted two big changes: in the professionality of the athletes, and in the technology supporting them.

“[Nowadays] they have their own nutritionists, they have their own psychologists. Thirty one years ago when I first started, you turned up and you had your manager, and he did his best to get you a few bananas from the local corner store… whereas today all these people come in and they set up, in the big events you wouldn’t believe it it’s like a weather station.”

Being a commissaire is all about ensuring a fair playing field, and for McDonnell, his skill at that comes from his deep respect for the effort athletes pour into their sport.

The 2004 Olympics in Athens is a great example.

McDonnell was the track starter, which, given the events were live with a 20-second window, meant keeping to a very rigid time schedule.

“The way it works is that they do a qualification, pick the top 26 or 28, and they repeat until they get to the top two,” McDonnell explained. “And so the two top riders had gone through the process over two days. And their final is best of three.

It was the final race of the finals.

“I walk up to talk to the two finalists,” McDonnell said. “And the guy standing on the side of the track who was working for the producer who’s doing the live feed, he’s stressing and going ‘hurry up’, ‘hurry up.’ And I wouldn’t. I had the two riders up there, I was taking it slowly and saying to both ‘You’re ready?’.

Only once I heard the ‘yep’ did I blow the whistle and off they went.”

“At the debrief, the producer comes down and he went ape, absolutely ape, at me, in front of everyone, saying ‘We lost 20 seconds. Not good! Not good!’”

“And I said: I know you did. But those two riders prepared for four years to get to a third ride-off which is going to be decided in 10 seconds – and you’re telling me I couldn’t afford them the 10 seconds?’”

The producer was quick to apologise.

With the International ‘commisairing’ age limit capped at 70, this will likely be McDonnell’s last games.

He’s still planning on doing national events though – and, of course, you’re bound to see him out cycling.