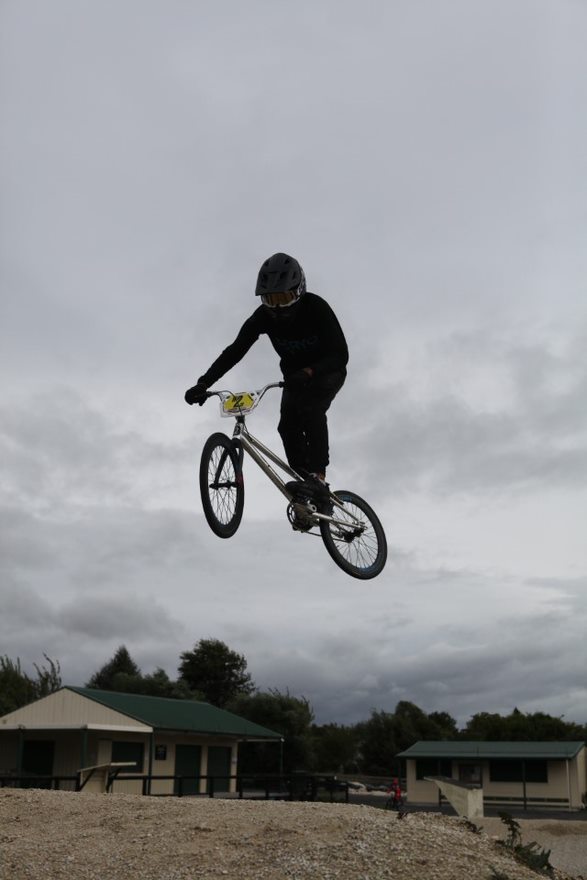 Since the day he was born, Luke Brooke-Smith has been driven to win.

“Every single thing he’s done – anything you can think of, like first to tie his shoelace, first to put his shoes on, first to sit in the car – has been competitive,” said his father Phil, a former British BMX champion.

Phil believes this, combined with “a lot of natural talent” and “a lot of hard work and dedication”, is what has made his son so good since he took up BMX as a pre-schooler.

Luke’s fellow Cambridge BMX Club member Leila Walker, who got hooked on the sport after watching her cousins riding when she was six, shares the same hunger to win.

“BMX is not an easy skill,” she said.  “And for me I’ve always liked a challenge and I like to think that nothing will stop me.  I’m competitive too, so a nice mix of both.”

Luke and Leila are two of the best junior BMX riders not only in New Zealand, but on the entire planet.

The Cambridge High School students both won gold at the New Zealand BMX Championships in Hamilton recently and now, after nearly three years away from international racing due to Covid travel restrictions, they’re itching to prove themselves again on the global stage.

Leila (who is not related to Olympic BMX medallist Sarah Walker) has just got off the best possible start, winning gold in the junior elite division at the 2022 Oceania BMX Racing Championships in Brisbane.

The 17-year-old has been a national champion every year for the past decade and won six consecutive world titles between the ages of 8-13 before a fall at the World BMX championships in Belgium in 2019 ended her winning streak.

“I finished eighth and that was my last international race, nearly three years ago,” Leila said.

Since then she’s been training hard to reclaim her world number one status.

“You know that everyone’s been putting in a lot of work all over the world but nobody’s really ridden against anyone so you know you’ve made gains but it’s like, am I off the pace, am I quicker?” she said.

The CHS house prefect and sports committee leader, who loves travelling and meeting new people, is hoping to answer that question at the World BMX Championships in Paris in July.

Luke, a seven-time national champion since 2015, has his sights set on the same event, where he’d love to pick up his first world title.

“I’ve come close so many times…all I think about is training to get to that goal,” the 13-year-old said.

So far it’s been a bumpy road, paved with concussion, broken limbs and near misses.

In 2015, at his first world champs in Belgium, he flipped over his handlebars and knocked himself out and the next year, in Columbia, he slipped in the final and finished seventh.

In 2017 a “nasty” broken leg left him in a toe-to-hip cast, but he managed to finish sixth at the world championships in America, and in Azerbaijan in 2018 a semi-final crash brought his dream tumbling down.

“The five best riders in our age group were all in that semi and we were all just dominoes down the first straight,” he said.  “So the three at the back came out and made the final.”

He finally claimed a spot on a world championship podium in Belgium in 2019, taking silver.

“So I’m currently second in the world,” he said.  “It’s pretty nice to be able to hold it for three years but you never know what could have happened in that three-year gap.”

Also a talented football player, Luke is striving to be a professional sportsman when he leaves school.

“I’m only young but I’m like what am I going to do if I don’t come first at football or BMX?” he said.  “That’s that motivates me.  I’m just like, I can’t do anything else.”

Riding professionally also appeals to Leila, who is considering studying sports science or sports psychology at the University of Waikato next year and aiming to compete at the Paris Olympic Games in 2024.

“As long as I keep loving what I’m doing – and keep enjoying it – I guess I’ll see where it takes me,” she said.

Both riders thanked their sponsors for helping them pursue their dreams.

“We’re so appreciative of their support,” Leila said.