Some of the 53 runners on the course during Saturday’s event.

Cambridge’s free park run celebrated its fifth birthday and a return to some sort of normality with a 5km run and walk on the Te Awa River Ride on Saturday.

There were 53 finishers with Paul Johnson out of the blocks quickly and back home in a personal best of 18:25, still some way from the best time of 16:28 run by Jonny McKee in January 2020.

Since its debut, the Cambridge NZ park run has held 218 events, had 1884 finishers and 10,697 finishes with an average 50 participants each time.

The women hope to build up a new team of volunteers to join the 160 who have offered their services over the five years.

Eleven personal bests were recorded on the day, proof conditions were perfect.

The timed 5kms has been operating in New Zealand for 10 years.

The Cambridge park run is held at the same time 8am and the same place, the Velodrome every Saturday. Christine Jenkins (has volunteered over 200 times! And Sammy Simpson) Paul Johnson on the homeward trail towards a personal best of 18:25. Hazel Johnson and Charlie Russell on their way to personal best times of 30:43 and 29:16. Richard and Belinda Wren walking with a friend (Carey Church, a first timer) 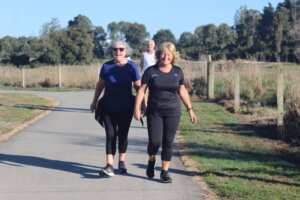 Noeleen Christensen and Peter Hammington with backs to us, Grant Kane coming towards us and lady with buggy is Kimberley Richards