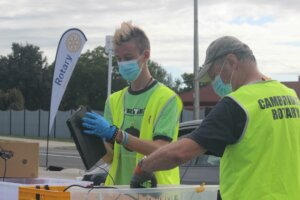 Elliott Schoot, centre, checks out an i-Pad at the Urban Miners collection.

The Urban Miners initiative in Te Awamutu and Cambridge, which results in redundant electronic equipment stripped and recycled, is run by the Cambridge Rotary Club.

The best community group award won by the Cambridge Rotary Club recognises a not-for-profit community organisation which contributes to enhancing the environmental and social aspects of their region and shows a strong sense of community spirit.

And the club’s entry for the award was accompanied by pictures provided by The News.

There was little time for celebration as the monthly collection took place outside Cambridge High School on Sunday morning.

The service, in conjunction with Te Awamutu Rotary and set up by Cambridge Rotarians David Blewden and Mark Hanlon, keeps e-waste and electrical items out of landfills.

Urban Miners receives funding from the Waipā District Council through its Community Waste Minimisation Fund and the Cambridge Community Board.

Collections take place from 9-11am in Te Awamutu, on the first Sunday of every month at the Te Awamutu Sports and Recreation Club while the Cambridge collection is held in Swayne Road outside Cambridge High School on the third Sunday.

It is a non-profit, non fund-raising activity launched two years ago. Items which can be resold are given to the Cambridge Lions Club for its second-hand shop. Rotarians at the Urban Miners collection try to ascertain whether this printer is worth giving to Lions to sell at their second-hand shop.

Helping bring the average age down at the latest collection was Elliott Schoot, 15, who attends Cambridge High School.

He was taking an electronics class last year when a Rotary member told him about the initiative.

Other volunteers defer to his knowledge about more modern electronics equipment while Elliott often has a laugh about some of the ‘older’ items he sees.

“There is some really old stuff like we had two Nokia phones from the 1980s. They really were big bricks.”

Taupō won the Most Beautiful large town award – won in 2019 by Cambridge – while Whakatāne won the supreme award.
The Leith Place toilets in Tokoroa won the Best Loo Award.