Money’s on the maunga Quinn Dallinger on his farm at the foot of Mt Maungatautari

Reopening the northern entrance to the country’s largest ecological island on Sanctuary Mountain Maungatautari will have huge economic benefits for the Waipā economy. A drone view of Mount Maungatautari

It is already a significant domestic tourism attraction because of its ancient native forest, but visitor numbers have been impacted since the closure of the Hicks Road entrance in 2018 following a dispute with land owners.

That side is the one closest to Lake Karāpiro which has thousands of visitors every year.

Waipā mayor Jim Mylchreest, announced the northern entrance reopening on New Year’s Eve. He was chief executive of the Maungatautari Trust from 2002 to 2009 and helped raise more than $17 million required for the construction of 47kms of predator proof fence around 3400 ha of indigenous forest. A drone view of the northern track from Hicks Road

Before the dispute, the first 850 metres of the walk from Hicks Road had been along a private driveway and across private farmland.

“More people can enjoy this ancient ngahere in the heart of our district. Maungatautari is home to so many native flora and fauna and is a very special place to visit so I would encourage those who can, to do so,” said Mylchreest.

Sanctuary Mountain Maungatautari co-chair Poto Davies said the trust was privileged to be able to share the mauri and mana of the maunga.

The southern entrance at Tari Road, home to the Manu Tīoriori Visitor Centre, remained open during the three-year dispute.

Maungatautari marketing manager Freeman Ehu said there had been a major surge in visitor numbers in the past few weeks. The track follows the Wairakau Stream to the mountain

Quinn Dallinger, who has farmed since 2016 on a 225ha dry stock property below the mountain and next to the Hicks Road entrance, welcomed the announcement of the northern reopening.

He has been collaborating with the council and the trust to re-establish access and has overseen the establishment of a track on his property which follows the Wairakau Stream to the mountain. Meanwhile Cambridge Community Board member Mike Montgomerie, who has an adjoining 27ha bush block inside the pest proof fence, released four kiwi in the reserve before Christmas. He told the board a recent survey showed there were as many as 1200 kiwi on Maungatautari. 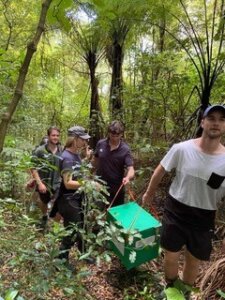 Sam and Mike Montgomerie release kiwi into the bush