The site for the proposed bottle store is only metres away from St Andrews Anglican Church.

But because its objection to the Blue Drops application to establish an off-licence facility in the former Guthrie Bowron premises arrived too late, the Waipā District Licensing Committee cannot consider it at a hearing in Te Awamutu tomorrow (Friday).

Neither can the committee consider a petition with 46 signatures from St Andrews Retirement Village, or opposition from the operator of the neighbouring Number 1 Motel and several residents.

All contacted Waipā District Council after being alerted by a Cambridge News story in July.

The committee will hear from the Police and the Medical Officer of Health who met the opposition deadline. Under the Sale and Supply of Alcohol Act 2012, they are required to inquire into any applications.

Jeanette Molony, who organised the petition, said the first she and other residents from 65 units in the village knew about a proposed liquor store less than 50 metres from their doorsteps was when they read The News. 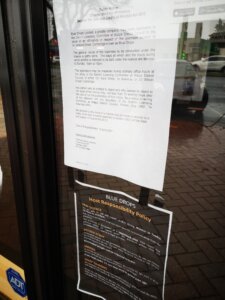 The application for a liquor licence was displayed inside the store window.

Two public notices outlining the application appeared in a Stuff-owned newspaper in early June and the objection period ended on June 30.

“We don’t always read that newspaper, so we knew nothing about it,’ said Molony.

Neither did she nor other residents see two A4 posters pasted on the building’s windows.

The public health organisation has been calling for urgent legislative change to the liquor act saying it is outdated, no longer fit for purpose and does not reflect current accessibility.

“It’s already too easy for whānau to access alcohol, given the density of alcohol outlets in our communities,” Dymus-Kurei said.

The Waipā licensing inspector does not oppose the application and Cambridge Community Board chair Sue Milner said the board was unaware of any issues such as youths congregating, litter, graffiti or noise issues which would affect the application.

In its objection, Police said the applicant failed to demonstrate how it will meet the requirements of the Sale and Supply of Alcohol Act and had not provided a Business Plan to demonstrate that factors such as locality and supply of alcohol would not adversely affect or harm the community. Police are concerned the proximity of other off-licences may result in a price war and increase the potential for further alcohol related harm. They argue the applicant does not have sufficient experienced staff to operate the business.

The liquor store is 127m from St Andrews Anglican Church and near Cambridge Middle School which caters to youth aged 11 to 14. Its opposition also notes how near the liquor store is to places where liquor is banned.

That would result in increased availability, competition, pricing and, according to research, increased harm.

The opposition also notes how near the liquor store is to places where liquor is banned. The Medical Officer of Health will speak to his application at the hearing.

The licensing committee accepted Hāpai te Hauora had an interest but the committee “was not satisfied that this is an interest in the proceedings, apart from any interest in common with the public” and declined its application to be heard.

In its application, Hāpai te Hauora argued the newspaper public notices did not meet the Act requirements and that because the applicant’s address was not included, the advertisements should run again.

Dymus-Kurei said there were other “sensitive sites” nearby where “whānau pray, learn, live, play and work.”

Because the area included hospitality, food and takeaway premises, liquor store customers could be tempted to consume it all in their vehicles or on the street, she said.

The public hearing will be held at the council chambers in Te Awamutu from 11am.