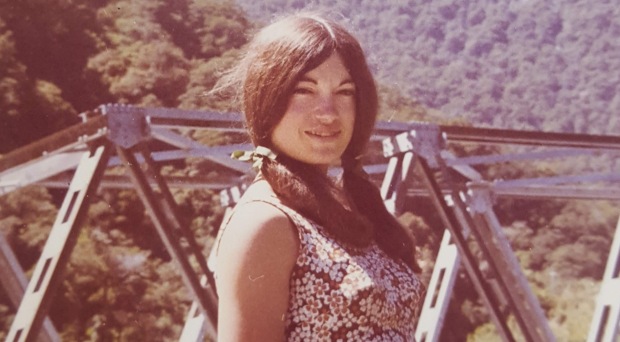 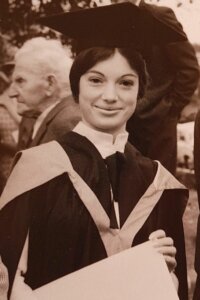 Louise graduated with a Master of Arts Degree with Honours in 1970.

An advocate of children’s literature who was once the pretty girl in the Hogsnort Rupert song of the same name, has died.

Louise Clark died at home with her family on September 21, after a courageous three-year battle with brain cancer. She was 72.

Louise was the Waikato co-ordinator for the Kids’ Lit Quiz, a literary competition for 11-13 year-olds. The quiz, the 1991 brainchild of Wayne Mills, is now an international competition that attracts hundreds of young entrants vying to win the world title each year.

Louise was passionate about reading and books from a young age. The daughter of Dutch immigrants, Louise Henriette Servaas van Rooyen was born on June 2, 1949 in the family home Carpe Diem, in woods near the village of Nunhem in the South of Holland.

She arrived in New Zealand at age two with her older sister Maria and parents Antony and Maria, who left war-ravaged Europe where they were part of The Resistance during the Second World War, helping downed Allied airmen escape capture by the Nazis.

The family settled in the South Island and the couple had three more children, Joseph, Karl and Anna-Maria. Louise with the first of her babies.

Louise was an early reader and by age 10 she had read the complete works of Shakespeare. She built up a library of books at home and was never without one.

Though her mother barely spoke English and the children spoke Dutch at home, Louise’s grasp of the English language was impressive.

The next year Louise won a medal for placing second in New Zealand in the Chamber of Commerce English exams.

Later that year, at age 16 and in fifth form (Year 11), Louise again made headlines in the Marlborough Express for passing School Certificate and University Entrance exams in the same year, a rare achievement.

When asked by a reporter why she sat both exams in the same year she simply answered: “My teachers thought that I should”.

She also took third prize that year in the Victoria League competition and was Dux of the school.

At 17 in 1967 Louise began studying at the University of Canterbury, where she met her husband-to-be Paul Clark.

Paul remembered of their first meeting at a dance early that first year: “My eye was caught by a beautiful girl with brown hair and large brown eyes”. The pair began dating at the end of that year and remained together for 53 years. Louise graduated with a Master of Arts Degree with Honours in 1970.

“I was so proud of my clever girl,” Paul said. “Louise’s academic excellence was recognised when she was offered a highly sought-after job with the Ministry of Foreign Affairs in Wellington, which came with the prospect of an overseas posting in due course.

“After much deliberation she typically, selflessly declined as it meant leaving me in Christchurch as I was still finishing my law degree.”

Instead Louise accepted a job in the newsroom at CHTV3 as a researcher for on-air stories including writing scripts for presenters.

She made the occasional appearance on TV with the most notable being in a video of the Hogsnort Rupert hit song Pretty Girl as the “pretty girl”.

“Not bad given that the other attractive rookie in the newsroom at that time who could have featured in the video was a young Judy Bailey, starting her career in broadcasting.”

Louise and Paul married in Christchurch on February 26, 1972 and moved to Hamilton where Paul began his law career.

They had five children, Stephanie, Daniel, Marie-Louise (Miffy), Caroline and Alexander (Choppy), moving to Tamahere in 1984 where Louise was not only homemaker but in charge of the couple’s Kiwifruit orchard.

She was a regular member of Tamahere Playcentre and worked as a librarian for a while at Tamahere Model Country School, where her children attended.

Louise eventually went to work for Paul at O’Neil, Allen and Clark before Paul set up his own practice, the success of which he credits to Louise for her work in the office there.

After her children were grown, Louise undertook a Master of Philosophy in English at the University of Waikato, graduating in 2004. She then studied for a Doctor of Philosophy writing a thesis in Historical Fiction for Children, 1862 to 2008, gaining her doctorate in 2009. Though officially after that her title was Dr Clark, Louise was too humble to ever use it.

She also taught children’s literature at the University of Waikato and it wasn’t uncommon for Louise to host New Zealand authors such as Tessa Duder and Maurice Gee.

Louise’s warmth and good nature afforded her a large network of friends, many acquired through her and Paul’s long-running membership of various vintage car clubs and groups – most notably the Hooters and Tooters.

Though Louise had many interests and talents; she was an exceptional cook, and an excellent sewer, had a very dry wit, and no-one could beat her in a quiz – her greatest passion was her family, and in later years, her nine grandchildren. Louise and Paul in Dunedin.

Louise had a special affinity with children. And when her grandchildren visited Oma, as they knew her, they never watched a screen, because Louise herself rarely watched television – she learned about the day’s events from newspapers and radio.

Instead, the time spent with Oma was based on imaginative play; building huts, doing puzzles, baking, gardening, dressing up and of course reading books. This is as it was for her own children.

The grandchildren delighted in choosing from Oma’s extensive collection of children’s books and having their grandmother’s undivided attention when she read to them.

A birthday present from Oma consisted of a trip to her favourite children’s bookstore, Books for Kids in Hamilton East, to select a new book, and an ice cream from nearby Duck Island Ice Cream.

As a result of her love for them, Louise’s grandchildren adored her. They read prayers and sang Cover Me in Sunshine by Pink at Louise’s funeral at St Matthew’s Catholic Church in Silverdale.

Louise was buried in a wicker casket, according to her wishes for an environmentally-friendly eco burial, with rosary beads and her favourite Georgette Heyer book in her hand, bookmarked to an exciting page.

Louise never complained about her cancer. She never called it unfair that she was struck down at 69 with “Frank” (the tumour), but there was immense sadness that she wouldn’t get to share in her grandchildren’s lives as they grew up.

A few days after Louise’s funeral, a children’s book arrived in the mail from Books for Kids. The Memory Tree by Britta Teckentrup, is a poignant picture book to help children celebrate the memories left behind when a loved one dies. Just like in the book, memories of Louise will endure.