My son won the cup… “There was something about him that you knew he’d be successful – and it was kind of in an unassuming way – but you just knew he was going to make it,” said Cambridge Middle School assistant principal Martin, who taught McDonald in year 7 back in 2003.

Last week the jockey proved him right. Piloting New Zealand-bred mare Verry Elleegant in last week’s the Melbourne Cup, the 29-year-old surged up the home straight at Flemington Racecourse, thundering past red-hot race favourite Incentivise with more than 300m left to run and leaving the rest of the field in his dust as he crossed the line to win Australasia’s most coveted racing prize.

In doing so he broke a 160-year ‘curse’ – becoming the first jockey to win from the Barrier 18 starting position. 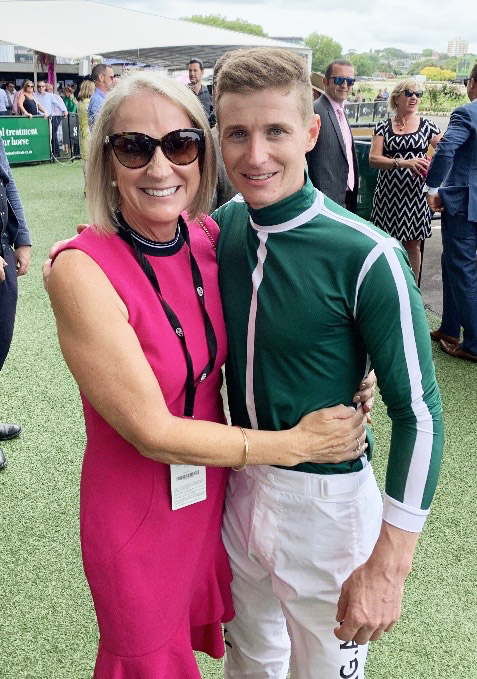 McDonald with his mother Dianne at Auckland Racing Club on Boxing Day 2019.

As McDonald, who was inducted into the New Zealand Racing Hall of Fame in May, was celebrating on the racetrack, his mother Dianne was whooping with joy in front of her friend’s television set in Cambridge.

“I’m embarrassed to say there’s a video out of me jumping up and down and screaming at the TV, which will never be revealed,” she laughed.

Watching her son win “the race that stops two nations” was “unbelievable.”

“I thought it was a dream and that I would wake up really,” she said. That next night I couldn’t sleep because I thought did it really happen? It was hard to get my head around that he did it.”

McDonald grew up in Cambridge with his parents and younger brother Luke and went to Kaipaki School, Cambridge Middle School and Cambridge High School. He now lives in Sydney with his partner Katelyn Mallyon, a retired jockey and Channel 7 racing presenter. His parents, who still live in Cambridge but are now separated, trained horses together and his father Brett is a former jockey.

Although McDonald was immersed in the equine world from birth, dairy animals were his first love. He got into riding horses after meeting jockey Lance O’Sullivan, aiming to save money to buy a dairy farm.

“He basically got on a horse that day and six weeks later he was out hunting out with me, and the rest is history,” Dianne said.

She celebrated her son’s win

with champagne and cocktails and spoke to him on the phone that evening.

“All I remember saying is it’s just unbelievable, and he was like yeah, pretty good eh? I was just so proud of him,” she said.

She’s not sure if winning the cup will change his life but “it’ll help him pay a bit more off the mortgage, which will be nice”.

“If you know anything of James, he’s very down to earth,” she said. “He’s very loyal to his friends and he doesn’t like all the stardom and all the interviews.” Cambridge winners in the Melbourne Cup

Winning the iconic race was the highlight of a stellar Melbourne Cup Carnival for McDonald, who broke a record held for more than 20 years for most wins in a cup week.

“He won 10 races – the previous record was nine – including four Group Ones, which was pretty phenomenal,” Dianne said.

Cambridge Middle School teacher Alistair Martin has kept an eye on McDonald’s achievements over the years.

He remembers McDonald as a gifted sportsman with incredible drive and determination, a “very nice, caring person who everybody liked”.

“He was from a country school and when he came to our school I think he found it was quite a big transition, so he was fairly quiet and fairly shy when he first arrived,” Martin said.

“He was physically at the time quite a small guy, but his confidence built as the year went on. He was a very unassuming character but there was something about him… you just knew he had the x-factor.

“His absolute passion in life, even at age 11, was horses. He very much looked up to Lance O’Sullivan, who was at that time a very successful jockey. James used to work in the morning mucking out stables; he was saving hard for a life ahead of him.

“He wanted to be a jockey more than anything – and not just a jockey but an outstanding jockey. And he was prepared to put the work in; that was probably the difference. He was absolutely committed, even back then.”

In turn, McDonald’s mother remembers Martin being a special teacher who took her “tiny and very timid” son under his wing.

“I actually contacted Mr Martin years ago and told him he was the turning point for James because he gave him confidence and made him feel so comfortable,” she said.

“He was just the nicest guy, and he was so gentle with James. Oh Mr Martin, bless him.”

“This is a once in a lifetime week,” she said.

“You wouldn’t believe that something like this could happen. To have 10 wins and some seconds and to win four Group Ones in one week including the Melbourne Cup – it’s what dreams are made of.”

James McDonald with the Melbourne Cup