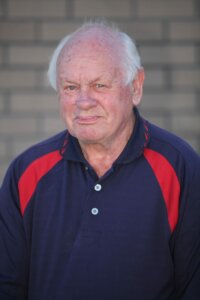 Was it a simple mix up or divine intervention?

Howard Martin was at Gentle Dental Cambridge waiting to see Dr Firas Adheem on November 2 when the door opened.

“I heard this other man come in and say, I’m Howard Martin and I’m here for my appointment, and I thought to myself well, I’m already here!”

The two patients laughed when they realised they had the exact same first and last names, and the same dentist, and had suffered the same injury – a broken tooth.

An administrative error had seen them both called in for the same appointment.

“I knew there was another Howard Martin around Cambridge; I’d heard about him,” said Howard Royce Martin, 75, an electrician who moved here from Auckland with his wife three and a half years ago.

“I said we must get together to have a cup of coffee sometime and have a talk because I knew more about him than he knew about me.  I said to him I think it’s a divine appointment, myself.  We were meant to meet.”

Howard Alfred Martin, 74, a retired farmer who moved to Cambridge from Wellington in 1987, said the receptionist apologised profusely for calling him in on the wrong day, but he was glad she had.

“I thought it was rather fortuitous that I’d met this fellow,” he said.

“We got chatting and discovered we’re both Christians.  And we got talking about different places of worship, where we go and about the Lord Jesus Christ, and he was very keen to know about my faith and we struck up a good conversation.”

Since meeting, the two Howards have chatted over the phone and made plans to meet.  Both are open to exploring a potential new friendship.

“I’d be very happy for that to happen because we’re new in the area and the more friends we can make the better,” said Howard Royce.

Neither man can recall meeting another Howard Martin, but both have heard of one or two others floating around New Zealand.

“It’s not a popular name, I’ve found that out,” said Howard Alfred.  “I believe it’s more common in America than it is in New Zealand.”

What are the chances?

Trying to calculate the chances of having the exact first name and surname as another person is a very interesting question – “which is nerd speak for a nice complex problem”, Statistics New Zealand principal analyst Richard Penny says.

“The short answer is, it is difficult to provide more than an extremely approximate answer.

“A starting point would be to find the number of people in New Zealand with that name.”

However, as far as he was aware there was no list of names of people in New Zealand “so that wouldn’t work”.

Department of Internal Affairs registrar general Jeff Montgomery confirmed his organisation did not have a list showing how many ‘Howard Martins’ lived in New Zealand.

The first name ‘Howard’ hit peak popularity here in 1954, with 45 babies given the moniker.

Whitepages.co.nz lists only one Howard Martin – Howard Alfred from Cambridge – but more than 10 ‘H’ Martins.

In summary, working out the statistical likelihood of one Howard Martin meeting another Howard Martin at the dentist in Cambridge is challenging.

“Having a name and finding a match, the probability overall is small,” said Richard Penny.

“Obviously when it happens people will think ‘what an amazing coincidence’ but I, as a statistician, think, ‘interesting, but not unexpected’. An analogy is, your chance of winning Lotto is very small, but lots of people buy tickets, so almost always someone wins.”