The great sprite and snickers mystery Tilly the cow and Andrew Johnstone who both star in a new feature length documentary. Photo: Mary Anne Gill.

Fencourt Road is hardly Hollywood Boulevard, but it will be front and centre in two new films from one of the country’s top directors.

Costa Botes, best known for his work with Peter Jackson on Lord of the Rings and the hoax documentary Forgotten Silver, has been filming Cambridge resident Andrew Johnstone picking up litter and tending to his cattle on adjacent grazing land.

The two-minute piece is called Clean up Rubbish while the second is a feature length documentary.

Details on the longer film are sketchy other than it shows the interaction between Johnstone and the cows, each of whom has a name.

The star in Botes’ Lone Pine Films’ production of When the Cows Come Home is Tilly, Johnstone’s favourite cow.

The film’s premiere is likely to be held in Cambridge.

Meanwhile Johnstone’s ongoing battle with the local litterers, which at its peak produced a full sack of rubbish every fortnight, provided great film- making fodder.

Rubbish is not new to Johnstone who previously looked after the road frontage outside Shoof on Victoria Road.

There he would pick up ready to drink (RTD) bottles and cans, coffee cups, fast food wrappings and all manner of plastic things.

“The litter was made worse by council and NZTA mowers. Rather than picking up the litter, the mower operators mostly tend toward chopping it up in fine little pieces that can’t be seen unless you look closely but those little pieces get blown about in the air and end up in the soil and waterways,” says Johnstone.

“These days I’ve got 10 times the road frontage and collect a decent sack of rubbish a fortnight, the usual stuff.

“The first time I did it, I filled the tractor tray and some, after that it got a little easier.

“As time went on patterns emerged. The same items in about the same places week after week including the little green sprite bottle with a snickers bar wrapper stuffed inside.”

Johnstone said he picked up 240 of those before deciding on a response. 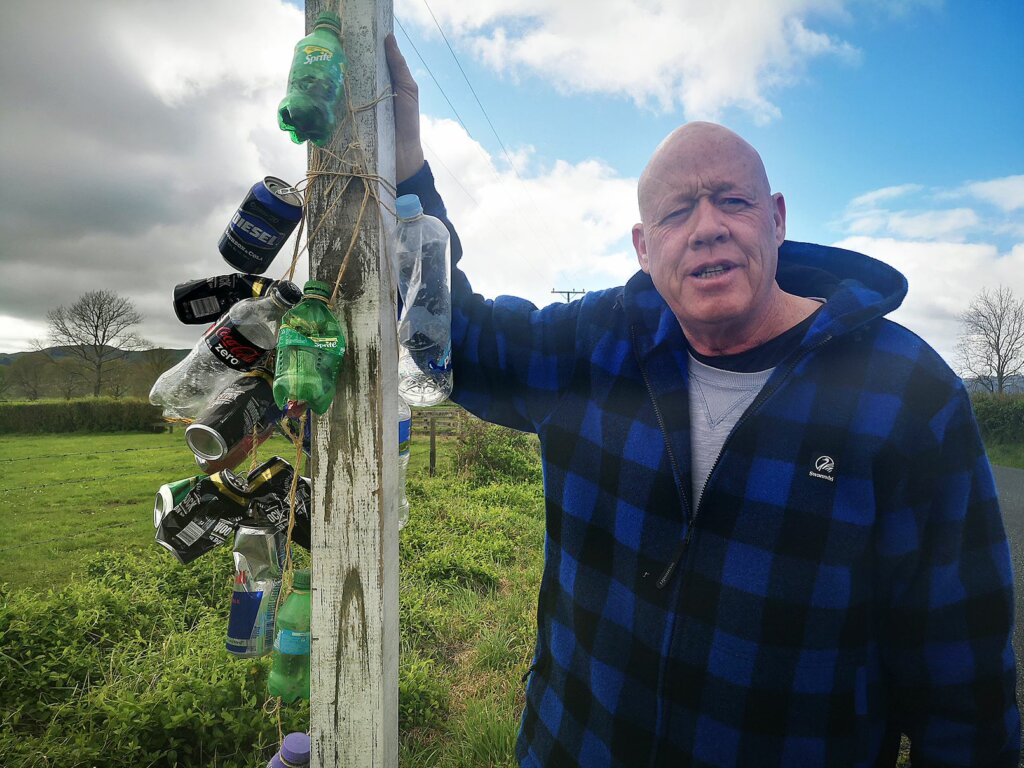 He tied 40 little green sprite bottles together with string and hung in plain view from a nearby signpost.

“They stayed there for months then one day they vanished. They hadn’t been ripped down and tossed aside as I half expected they would, they were just gone and I haven’t seen a small green sprite bottle since,” he said.

In its place was an empty vodka bottle.

Botes, who was filming the documentary, found Johnstone’s litter efforts fascinating and put a drone camera up for aerial shots of the road. He then filmed Johnstone walking down the road, picking up rubbish and putting it into his car.

At the end of the video, Johnstone says of the sprite bottles and cans: “Week after week after week, I’d love to find out who that is and then read them the riot act. Somebody loves sprite, somebody loves throwing it out the window and I enjoy picking it up.”

The ‘Be A Tidy Kiwi, Keep NZ Beautiful’ campaign of the late 1960s influenced a generation which included Johnstone.

“As a campaign it was all pervasive. I wonder if it mightn’t be time to do it again?”

Clean Up Rubbish is on Vimeo under Costa Botes Lone Pine Films.