A 47ha Cambridge subdivision with 212 new houses is expected to get the green light later this week from Waipā District Council.

Work on the 3Ms’ development on Cambridge Road stopped in July when independent hearing commissioners refused a resource consent application.

A hearing at the Environment Court appeared likely after developers lodged an appeal and meanwhile the abandoned bare land turned into a giant dust bowl angering some nearby residents. Behind the scenes though council staff and the developers were hard at work trying to avoid a court battle.

And the developers appear to have done it by purchasing properties, moving a roundabout, changing the layout of a roading network and making provision for a destination playground.

Wayne Allan, group manager District Growth and Regulatory Services said the council was “absolutely” comfortable with the application now and staff have recommended it proceed on a non-notified basis.

“It’s more in line with the structure plan requirements. It will activate the C2 growth cell not only for the 3Ms’ development but also for the Ministry of Education in terms of their primary school.

“Not only are we getting the primary school built in record time since designation, but we are getting urban development from 3Ms’ proposal, we are getting another proposal for a retirement village as part of the super lot and we’ve got a destination playground that’s going to be constructed that’s connected with our other reserves and walkway areas along the stormwater swale system,” he said.

Allan said it was clear after commissioners rejected the earlier plan as a non-complying activity under the council’s district plan, that submitters wanted council and 3Ms to work closely together to reach agreement. 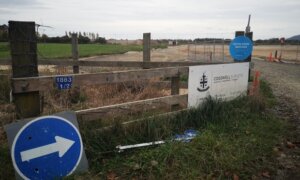 Some submitters then agreed to sell their properties which allowed for a new collector road and stormwater swale in the revised subdivision application, something the commissioners said were key requirements for the development.

The revised proposal has moved the roundabout from outside the Te Awa Retirement Village west towards St Peter’s School, preserving century-old trees.

It would also link better with the council’s C3 growth cell, said Allan.

Now, like any other subdivision in a residential environment, council could make a final decision under its delegated authority.

“It’s a really exciting development for Cambridge,” something echoed by the Cambridge Chamber of Commerce in July when it responded to the announcement commissioners had declined the plan by saying the new school within the subdivision was a critical need.

“3Ms can get on with supplying much needed sections to the market,” he said.

While the future looks bright for the subdivision, the council has in the meanwhile received complaints about the impacts of the large dust bowl. Te Awa general manager Mandy Hudson said many of her residents had respiratory conditions which were aggravated when recent spring winds whipped the dust through the air.

She advised residents to stay inside on Sunday and complained to the council.

“It’s not acceptable. You can’t put your washing out, you can’t open your windows,” she said.

Allan said the developers had been told to mitigate the impacts and were using water tankers on the site to settle the dust down.

“They’ve been told to keep on top of the issue,” he said.

“We are working actively to manage dust effects arising from earthworks, including watering.

“We have great relationships with our neighbours and want to see that continue throughout the development. We will be working hard to ensure that is the case,” he said.