Chops for a chopper 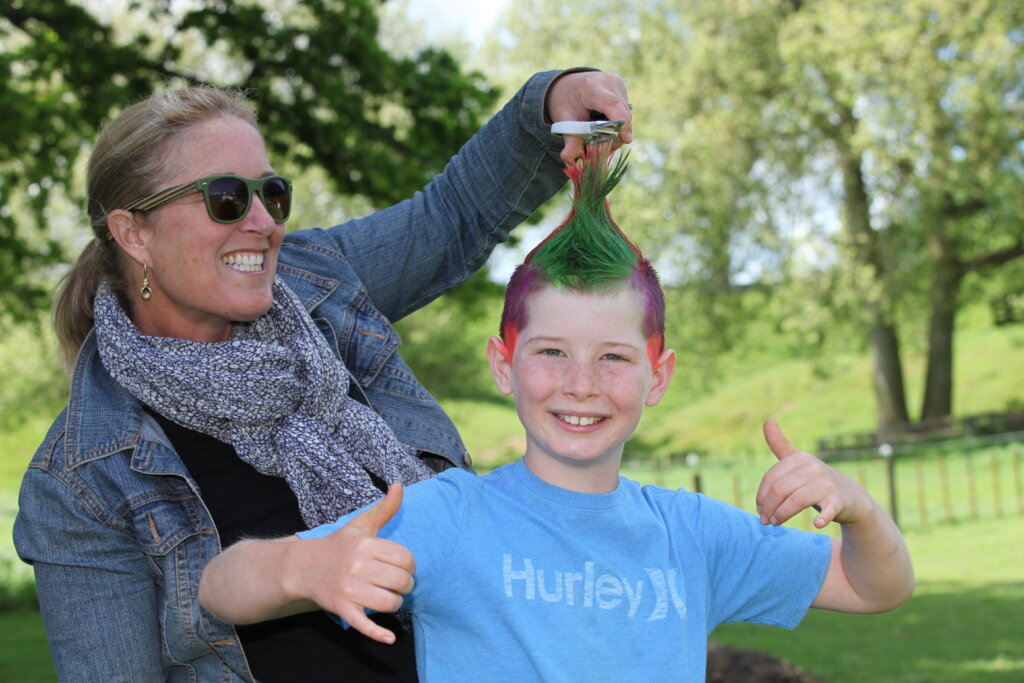 Tommy Peters has raised more than $7000 to thank the Waikato Westpac Rescue Helicopter service for saving his mother Anne, who suffered horrific injuries in a horse riding accident six months ago.

“I’m really grateful because if it wasn’t for them I might not have a mum,” the 10-year-old said.

Tommy had been growing his hair since Anne’s accident and collaborated with her on the idea of chopping his locks into a series of awful and outlandish styles to raise money for the rescue helicopter.

He made a short video clip and launched his “chop for the chopper” campaign on Anne’s Facebook page at the end of September.

Since then, his mum’s been his personal stylist, hacking and coercing his once flowing mane into a bowl cut, a mullet, a permed mullet and a multicoloured mohawk.

“The mohawk’s been my favourite so far,” said Tommy, who has developed a taste for flamboyant hairstyles, even if they have made him look like a “munter”.

“I’m not even a little bit keen on a regular haircut after this.  The whole thing’s been so much fun.”

The Kaipaki School student was hoping to raise $2000 and was “amazed” to more than triple his target.

“I’m really grateful to everyone who’s donated,” he said.  “This has shown me that anyone can make a difference no matter how big or small they are.” Anne said she and her husband Ben were proud of their son and “eternally grateful” to the rescue helicopter service and everyone who had helped at the scene of her accident on April 17.

She had been riding in an equestrian hunt near Matamata when her horse flipped over a fence, threw her headfirst onto the ground and landed on top of her.

Riding just ahead of her were two friends, Kim Timms and registered nurse Carla Fraser, who had taught CPR together

The horror of having to resuscitate Anne, who had gone into cardiac arrest and was suffering a brain bleed, is still raw for Carla, who fought desperately to save her friend’s life until fire fighters arrived.

“She was knocked out on impact and just becoming conscious as we got to her but after about 20 minutes she stopped breathing so we started CPR,” Carla said.

“She’d come around and we’d get her breathing again, but not for very long.  She was really trying, but her body just couldn’t do it.  I was feeling pretty desperate by the time the fire fighters pulled up.”

The relief of hearing the rescue helicopter approaching was “indescribable… just that noise was… oh, hallelujah.”

Anne was flown to Waikato Hospital and later transferred to a specialist brain unit in Auckland, where she spent six weeks.

Since then she’s been back at home working hard on her recovery.

“I had a brain bleed that was like a stroke, so the left-hand side of my body didn’t work and I had to learn to walk and talk properly again,” she said.  “But I’ve got my driver’s licence back and hopefully I’ll be able to start working restricted hours.  I’ve come a long way.”

Anne said her family and friends and the healthcare system had been phenomenal.

“The whole experience has been humbling,” she said.  “We’ve been wrapped in a giant hug for the past six months.  It’s been an amazing journey.  It’s not one you want to take, but I’m lucky there’s a happy ending.”

Anyone wanting to donate to Tommy’s “chop for the chopper” campaign can email anniebenji@hotmail.com.

“The rescue helicopter relies on the support of community funding so please donate to this amazing and vital service so it can keep saving lives,” Anne said.