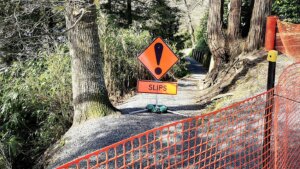 The popular Sam Lewis walking track has been closed off.

Waipā District Council has closed off one of its popular Lake Te Koo Utu tracks due to slips.

The 245m Sam Lewis Track at the south-west of the lake which comes out opposite the Good Union Cambridge has been penned off while Waipā’s park operations team assess the damage.

Team leader Matt Johnson said they would then plan the best method of repair for the gravel family-friendly path which meets up with the Camelia Track.

Lake Te Koo Utu has previously had other slips around the reserve, but the council are unaware of any active ones.

The reserve is a unique and significant space characterised by its numerous walking trails, heritage features, picnic areas and scenery. It was formed by one of the later eruptions of the Lake Taupō volcano, which blocked off parts of the Waikato River,