On your bike, Waipā! A 30-year $10.4 million plan to get thousands of Waipā people out of their cars and onto walking and cycle tracks in Cambridge, Te Awamutu and Kihikihi has been signed off by district councillors.

The business case depends on Waka Kotahi (New Zealand Transport Agency) funding 51 per cent of the work but once approved will represent an “intergenerational” change in the way Waipā residents move around their communities.

It will need a “mind shift” in thinking to develop infrastructure that works for the intended users, Transportation manager Bryan Hudson told the Service Delivery committee meeting on Tuesday.

The plan dovetails nicely into regional and district transport strategies to ramp up rail and bus services connecting Waipā communities with Auckland, Hamilton and Tauranga. Those strategies would result in more bus services through Waipā towns for residents.

Community involvement will be critical for the Waipā cycle and walkway plans following controversy in recent months around two developments which should have successfully kick-started a movement away from cars but instead pitted the council against residents.

Elected members, who bore the brunt of residents’ criticism over the Streets for People and Hamilton Road cycleway projects, told council staff to establish a working group to engage with the community better before the next stage gets underway.

Lessons had been learned from the controversial projects and the two working groups would play a key role in consultation and engagement.

That would make sure council heard from a broad community base, he said.

Stolwyk said she wanted to ensure people had their say and wanted representatives from the reference group included on the governance group.

“We want people who are going to challenge us,” she said and that included those currently using social media to attack the council.

“We want to hear from everyone here,” she said.

The business case’s objective is to increase active transport like walking, cycling, scooting and mobility equipment use in Cambridge, Te Awamutu and Kihikihi.

That would involve increasing the numbers walking and cycling in Cambridge by more than five percent and in Te Awamutu by six per cent.

Council will spend $5.82 million in Cambridge and $4.62 million in Te Awamutu and Kihikihi. The funding is provided for under the council’s Long-Term Plan.

The preferred network in Cambridge adds 9.8km of protected cycleways, 4.3km of shared paths and 2.7km of cycle friendly streets.

Cycling and pedestrian improvements would link Te Awamutu College to town, the events centre, the library, and to Kihikihi.

Other cycling and pedestrian improvements would link the Pak n Save shopping centre in Te Awamutu to town.

To achieve culture changes, there would be an ongoing focus on school bike training, access to cycles, skills training and education for drivers.

“The investment in cycling and pedestrian infrastructure in New Zealand has been problematic, with many projects having been built that have not resulted in any appreciable uptake of new users,” said Hudson.

“The problem is that cycling infrastructure has generally provided facilities on-road, without any separation from traffic and with little or no regard to how cyclists can use intersections.

“Pedestrian infrastructure has often been developed with able bodied adult users in mind, rather than the less able or younger school children, resulting in an incomplete network presenting barriers to safe and convenient travel.”

During consultation on the Long-Term Plan, Waipā residents favoured walking and cycling to become the most convenient mode of transport.

That would see separated cycleways and footpaths on key routes, safe road crossings for both walkers and cyclists and cyclists given higher priority over traffic. 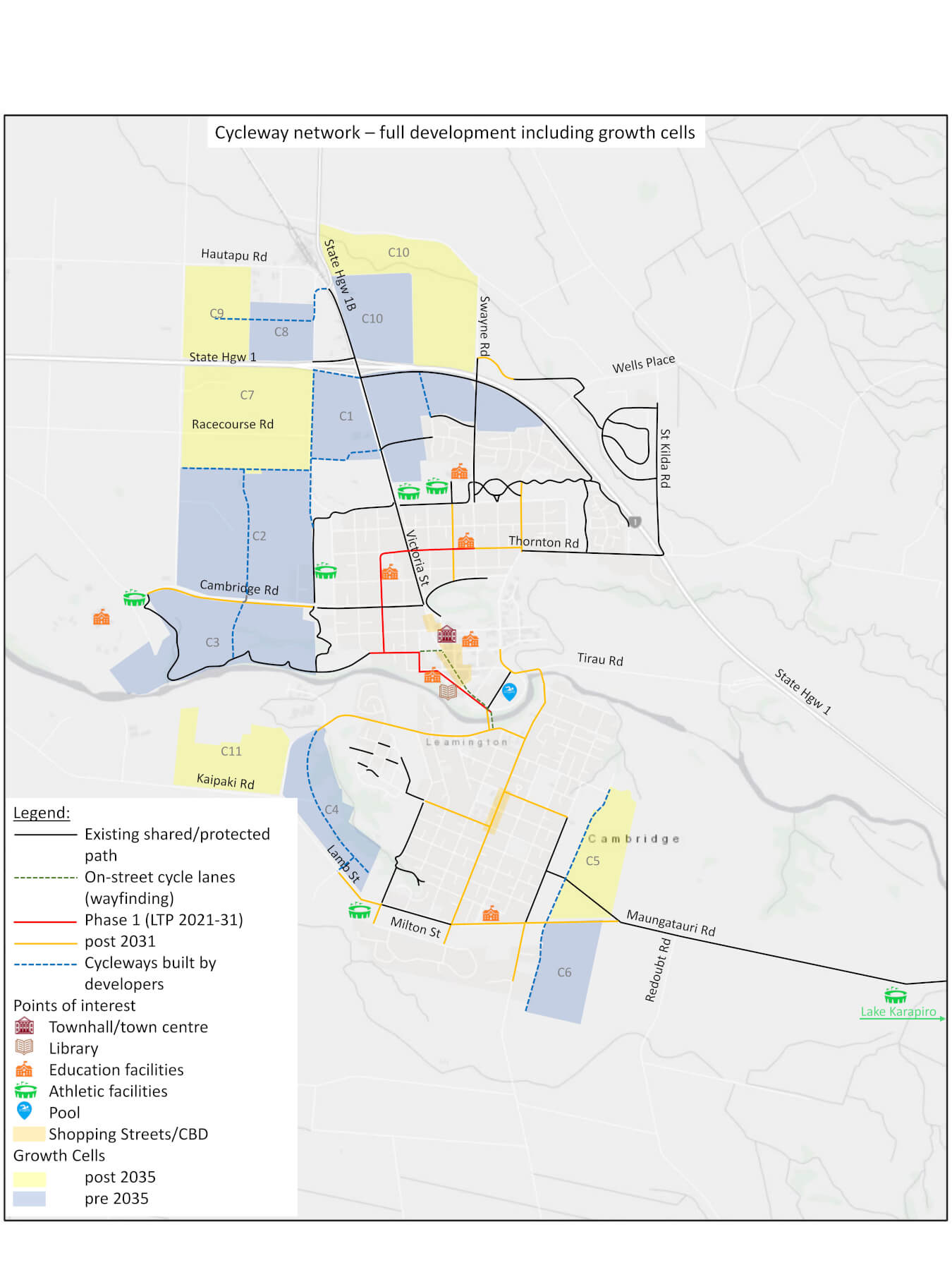 How the plans look for Cambridge