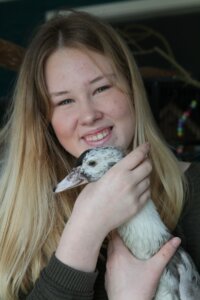 Emma Ward with one of her ducks, Rinky Dinky.

Sixteen-year-old Emma Ward has spent four years saving sick and injured animals and says they have rescued her, too.

“I was diagnosed with depression at 13 and anxiety at a fairly early stage, but my animals have helped me overcome all of it,” she said.

“I feel like they’re just amazing friends to have around.  They make me feel happy and accomplished and grateful for what I have in my life.”

She’s quick to add she has “some pretty good human friends too”.

Emma was just 12 when she set up Zachariah & Co, a one-woman rescue service for small animals.  She runs it from the Te Miro home she shares with her mother Tabitha and sister Kaitlyn.

Most of her patients are birds, which are rehabilitated and then either released back into the wild, tamed and sold or given to wildlife parks.

As well as advertising her service on Facebook Emma keeps a constant lookout for creatures to take under her wing.

“Some people put posts up about hurt animals so I’ll private message them and offer to take them,” she said.

The big-hearted teenager has learnt loads about animal health through “trial and error” and keeps the family fridge well stocked with medical supplies, including anti-inflammatories, antibiotics and liquid calcium.

“I don’t help with internal injuries because I’m not an actual vet and I can’t do surgery on animals,” she said.  “But if I see an obvious external wound I’ll fix it.”

Emma funds her rescue work by breeding and selling birds through Zachariah & Co and through a second business she started three months ago, Whatta Pup Pet Sitters.

“I care for pets in my home and I’ll take any kind of animal including birds and reptiles,” she said.

Emma has several local mentors, including Robyn Chappell of Bird Rescue Cambridge, who have willingly shared their knowledge with her.

She loves all animals but like her father, who died when she was five, she has a particular passion for birds.

“Since I was five I’d be carrying in a little bird that needed rescuing and I’d be trying to help it,” she said.

“Birds are really smart, they talk a lot and they give the best cuddles you could possibly have.  They can be quite sassy but I like that.  I like that I can give them attention and love and they’ll feel welcomed into this world.

“It’s just the best thing to see, when you’ve tamed a bird that used to be so timid, so unloved and now it’s the most loveable thing.”

The young entrepreneur is grateful to her mum for accommodating her businesses and her collection of more than 30 birds, which includes chickens, ducklings, rainbow lorikeets, Indian ringnecks, budgies, lovebirds, cockatiels and a magpie.

“Mum isn’t passionate about birds like I am but I don’t think she really minds them,” Emma said.

“She gets a little mad sometimes because they eat plants, poop everywhere and make a lot of noise.  But otherwise she’s pretty happy with all of it.”

Tabitha said she admired her daughter’s drive and passion for helping animals and was very happy to nurture her strengths and interests.

“I think she’s an amazing human being,” she said.

In her spare time Emma learns dancing and enjoys hanging out with friends in her Raleigh Street Christian Centre youth group.

Now the former Cambridge High School student, who switched to home schooling this year, has her sights set on becoming an avian veterinarian.

“I’d like to travel overseas and help birds all over the world,” she said.