A cross to bear Philip Richardson took in the sights and sounds of Hamilton Museum’s 1981 exhibition.

It’s been 40 years since the two of us were together in central Hamilton, but the circumstances are completely different.

Archbishop Philip Richardson, also Bishop of Waikato and Taranaki, and I walk across Victoria St from the Cathedral to Waikato Museum and step back to a day in July 1981. I had just turned 24, he was 23.
1981 is the name of the exhibition which recounts a landmark day in New Zealand – and ultimately South African – history. Visitors to the museum can get a feel for the atmosphere of the time as, for 56 days, the country was divided by a rugby tour.

Family members came to blows, the name Red Squad, the police riot control unit, was introduced into our vocabulary. Their long truncheons were colloquially called Minto Bars after John Minto, the national organiser of Hart – Halt All Racist Tours.

Sport and politics don’t mix was the mantra from one side. The protest movement begged to differ.
July 25, 1981 is a day I recall clearly. I was in Hamilton to see the second game of the tour, having given up the glory of playing a football match for Tokoroa against Tokanui.

Philip was part of a group which came down from Auckland.

I went to watch with my South Waikato News colleague Evan James.  Philip went to protest
Future Governor General Archbishop Paul Reeves had blessed a cross the night before, expecting it to be present at protest. It was entrusted into the care of Philip’s travelling party.

By the time my Tokoroa mates were kicking off, everything had kicked off in Hamilton.

Evan and I watched from the main stand at Rugby Park as anti-tour protesters broke through a line of police and charged onto the park.

It soon became evident that this was not a time to be flashing a Press Card. Behind me men in light grey suits screamed obscenities from the not-so cheap seats suggesting what fate should befall those protesters on the park.

And in the middle of the protesters could be seen the cross.

It had been carried by various parties through central Hamilton and, featured in one of the iconic pictures on the day – two St John’s Theological College students evading the attention of police to get it onto the park.

One was Philip Richardson. It would be fair to say Sir Paul had not expected to see the cross he blessed taking a star role in the protest less than a day later.

That protest led to the cancellation of the Waikato-Springboks game. I went home with two programmes and a head full of memories. We stopped at The Oxford in Tirau for a beer and kept our heads down.

There were some angry people at St John’s in Auckland too. By the time Philip and his 14 or so colleagues arrived home someone had tossed a rudimentary Molotov cocktail into one of the buildings.

It caused little damage, but fellow students were not impressed at being targeted.

On the way back to Auckland the St John team stopped for refreshments.

“I saw some relatives – and got a cool reception,” Philip recalled. 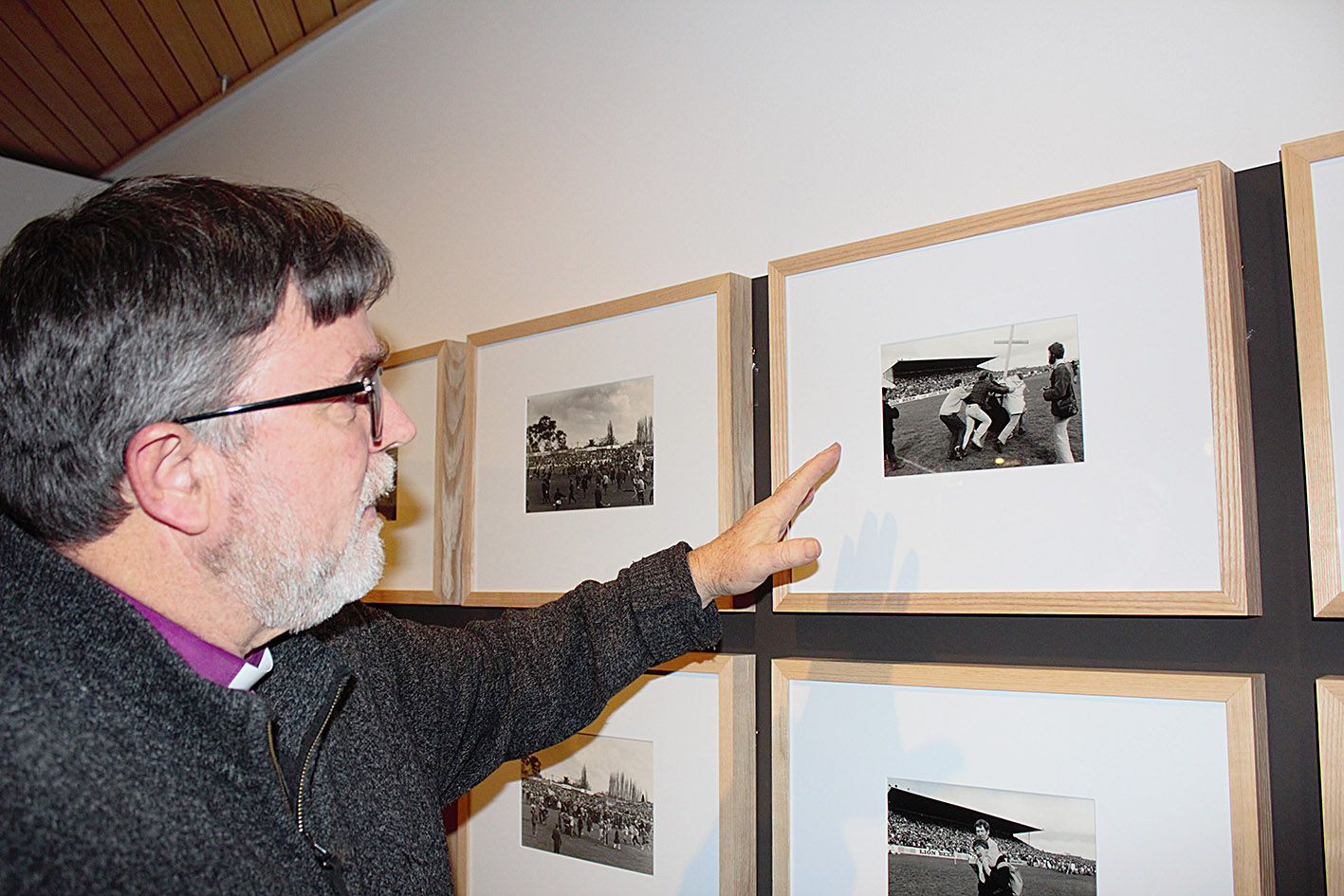 A picture which became an integral part of the media coverage – Philip Richardson recalls the moment he “invaded” the pitch.

And as he would do regularly, he called home that night.

“I don’t think your father wants to talk to you at the moment,” his mum revealed.

“Dad spent 30 years in the Air Force, and he struggled to accept what I had been part of.

“But a lot of things happened around that time – Whina Cooper, Bastion Point, and anti-nuclear campaign – ‘rent a mob,’ said Rob Muldoon.”

In those days, when an America destroyer visited Auckland, the flotilla of protest yachts which dotted the Waitemata Harbour included a little Sunburst carrying Philip Richardson.

I had expected Philip to show some level of pride, or satisfaction when he walked into the 1981 exhibition.

It had been, after all, job done.

Instead, he stopped, hands clasped in front of him and bowed his head.

“I have never been so frightened in my life,” he recalled. “There were four lines of fully clad riot police…

“They were trying to get everyone off the park, they told us: we think we can protect you for a bit – but after that, we suggest you go for it…”

Police were caught in the middle of the country’s civil war over the tour and copped a lot of criticism – but Philip Richardson pays tribute to Police Commissioner Bob Walton, who urged organisers to call off the Waikato game.

Walton subsequently told then Prime Minister Rob Muldoon he would resign if asked.  He wasn’t – and the Archbishop believes he deserves credit for his handling of the day.

“We took the cross down and marched to the stadium – I never envisaged actually getting onto the field.

“And it seemed when protesters did pull part of the fence down, there were people on the inside ready to make space for them to get onto the field.”

As we talk the video loop showing how the protest evolved runs.

Philip points out members of the group he was with.

two people carrying the cross onto the grass while others try to stop them.

“I admired the way they saw need.”

Forty years on from 1981 some things have not changed much.

I’m still writing news in Waikato – Philip is still a regular at St Johns in Auckland.

Plus, of course, he’s now The Most Reverend Philip Richardson, archbishop.

He told me the cross story a few years ago, and I vowed to write it one day. Here’s the day.

There is still the occasional raised eyebrow at the telling of the story – notably 10 years ago when an exhibition marked the 30th anniversary – and the humorous suggestion that his elevation to bishop might not have happened had they known.

In the wake of the cancelled game, there was conflict among church parishioners as there was in every other part of New Zealand society. I heard the collection box in one Waikato Catholic Church was returned with nails the following day.

At the time it was easy to dismiss the anti-tour protest as simply a vehicle for gangs and troublemakers to don crash helmets and confront police – I know that was a train of thought I was open to at the time.

But as the video footage showed, the protesters were a cross section of New Zealand, young, old, European, Māori, Pasifika, men and women.

In South Africa future president Nelson Mandela wasn’t watching – he was still incarcerated on Robben Island – but he heard.

A man our senior is also looking through the 1981 exhibition – he had taken photographs at the game.

“The police were going to camera shops and asking to see the pictures people had taken on the day so they could identify the protesters,” the man, who elected not to give his name said.

“I told them: not without a search warrant!”

One of the displays notes the faces in most pictures are not identified in 1981 and encourages people to come forward.

Maybe, 40 years on, if they do, it won’t split families asunder again.