Michael Dodds, whose search for employment in the hospitality industry featured in Cambridge News on June 17, has landed his dream job. 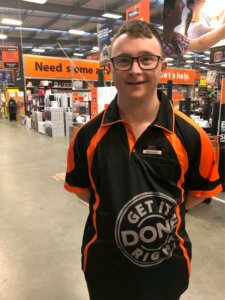 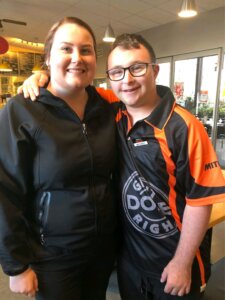 The 20-year-old has a new role of up to 20 hours a week at Mitre 10 Mega in Cambridge, where he’ll be greeting customers and attending to tables at Colombus Coffee.  He will also be doing odd jobs around the Oliver St megastore.

Disability employment facilitator Selwyn Cook, who has been working with Michael for two months, said the “ink was hardly dry on the Cambridge News article” when Mitre 10 contacted him.

“Now here we are and Michael has the perfect job, he said.

“The conversations have all been around Michael’s ability and not any disability.  This is how a truly inclusive employer thinks. … thank you Mitre 10.”

Mitre 10 retail manager Jan Storm said the store’s owner, Stephen Deverell, had asked him to get in touch with Selwyn after reading Cambridge News.

‘We want him to grow and live to the top of his potential and we want to be part of creating that situation.’ – Jan Storm

“We decided quite honestly that we’d really like to employ Michael,” Jan said.

“Our customers will like it and there’ll definitely be value we get from this.  We care for people and we think Michael will fit into our culture.  We want him to grow and live to the top of his potential and we want to be part of creating that situation.”

Mitre 10 owner Stephen Deverell said he was really pleased to have Michael on board.

“We’re really glad we were in a position to do something to help and I’m sure Michael will be really good for us and work in well with the team,” he said. 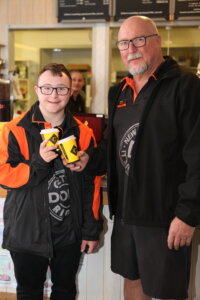 “I suppose it fits nicely with what Mitre 10 is; we’re locals and we see that as really important and it’s just nice to have the opportunity to make a difference.”

Just a few hours into his new job last Wednesday Michael, who has Down Syndrome, said he had already made lots of new friends.

“It’s really good, my dream job,” he said.  “It’s taking care of people – the customers – and making them coffees, giving food to them and wiping tables and all that stuff.”

He said his parents Ross and Victoria Dodds, who own Cambridge car dealership Windsor Nissan, were excited and “super proud” of him.

He is now looking forward to learning about Mitre 10 and saving the money he earns to travel overseas and go flatting.